Bah, it's snowing, which means I can't ride, which makes me grumpy.

Everyone around here loves snow, they get so excited when the weather forecast even makes mention of the horrid white stuff. People go nuts from when the first snowflake forms to watching it accumulate on their lawns. "It's so pretty". They're not thinking about how they are going to get to work the next day or how they are going to get to grandmother's house for Thanksgiving, just that it's snowing.

I don't like snow, I've had my share of shoveling, driving, chaining up, digging out, slipping, sliding, crashing and doing the damn penguin walk all while freezing my ass off.

I was curious how things were piling up around the valley and checked out a couple of web cams. First the local Oregon State University web cams... 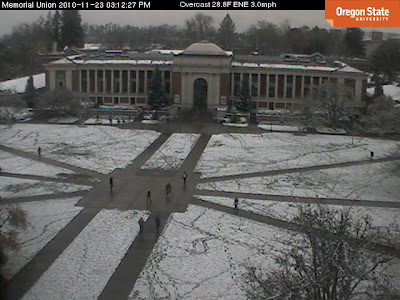 then around the state using Trip Check... 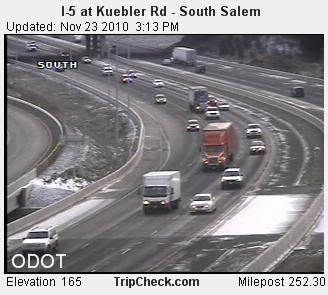 This isn't even snow, I know the rest of the country is having some nasty weather but this is more of an inconvenience. Schools have closed, but that's normal for around here when it snows more than an eighth of an inch. Fine by me, fewer soccer moms on the road.

I was curious to see the what the weather was doing in 'the old country' and checked the web cams there. 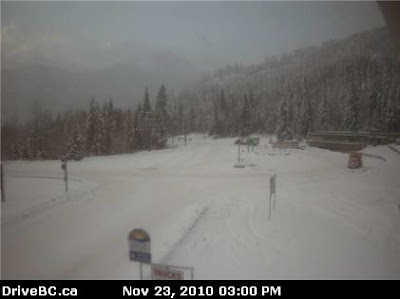 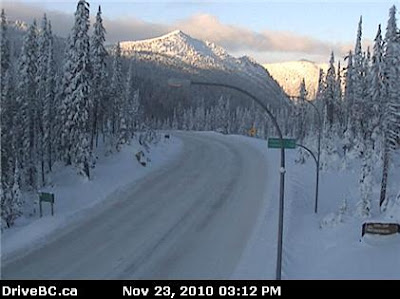 As I use this blog as a journal and look back from time to time to remember certain events, I try to make notes like this one of how early it snowed this year. Here are a couple of newspaper clippings:

Mid-valley braces for more cold weather
After dealing with snow and ice Tuesday, the mid-valley braced for colder temperatures overnight.

Temperatures are expected to reach the low 20s and upper teens, according to the National Weather Service. Snow flurries are possible, but not expected overnight.

Temperatures for Wednesday are expected to reach a high in the mid-30s, and Thursday and Friday are predicted to get into the 40s. No precipitation is expected until Friday, when rain is expected.

Most mid-valley schools were closed Tuesday because of the weather.

For updates, see the "Weather Closures" list on gazettetimes.com

There were several reported incidents involving cars and trucks on I-5 between Creswell and Eugene.

All lanes were blocked on I-5 southbound at milepost 192 in Eugene-Springfield, ODOT reported shortly after 8 a.m. Icy conditions disabled multiple vehicles.

A semi jackknifed at I-5 northbound, milepost 186 north of Creswell. Traffic was slowly getting by in the left lane.

A second semi spun out on I-5 northbound at milepost 212, north of Coburg.

Highway 20 was extremely icy at milepost 4, east of Newport. Multiple vehicles have spun out near that location.

Motorists are encouraged to carry chains and extra clothing and blankets.

A vicious storm struck the Pacific Northwest and other western states at the start of the holiday travel season, dumping heavy snow on roads, knocking out power to tens of thousands of people and causing a cargo plane to overshoot its runway in Seattle.

At least three deaths in Washington state have been blamed on the storm, including a man struck and killed outside his car Monday night on snowy Interstate 5 in Tacoma. Washington State Patrol Trooper Brandy Kessler said it wasn't clear whether the man was chaining up his car or pushing it when he was hit.

A man's body was found along the Willamette River waterfront in Portland, Ore., on Tuesday. Police were trying to determine whether the death was weather related.

Blowing snow, slick roads and temperatures in the mid-20s turned the Monday evening commute in the Puget Sound region into an hours-long crawl _ for those who made it home. Some commuters gave up after being stuck for five hours or more and returned to their offices, or just left their cars at the side of the road.

Seattle's morning rush hour wasn't, with few cars on the icy roads and motorists keeping it slow. Most schools in the state were closed or delayed and the University of Washington closed all three of its campuses. Snowplows and deicing trucks were at work.

Those hoping to get a jump on Thanksgiving travel were out of luck, with officials urging people to stay home and many highways dangerous to travel. Alaska Airlines Group warned that flights were being delayed or canceled because crews couldn't get to Seattle-Tacoma International Airport, where it accounts for about half of the passenger flights.

"Our customers and our employees both are just having a bad time because the roads are really bad," Alaska spokesman Paul McElroy said. A record 2.5 inches of snow fell at the airport on Monday, breaking the old record for the date of 1.5 inches, set in 1977.

Elsewhere in the West, the weather service issued a blizzard warning for Utah amid forecasts of strong winds, heavy snow and possible whiteout conditions Tuesday night. Searchers will brave an icy blast of winter when they resume the search of a rugged canyon near Moab for a man believed to have shot a Utah park ranger last week.

Commute times in Utah's urban areas could quadruple, and officials told holiday travelers in the northern part of the state to complete trips by the afternoon to avoid high winds and blowing snow. Utah State University is closing early, and schools and city offices canceled evening activities.

Temperatures dipped to freezing in the Portland area and homeless people lined up at emergency warming shelters. Some schools closed, but Portland International Airport was open and flights were operating normally after crews worked through the night to deice runways.

Chains or snow tires are being required on all mountain passes and some exposed valleys in the Sierra and northern Nevada, as snow and gusty winds make it hard to see the road. About a foot of snow is expected around Lake Tahoe.

Forecasters predict up to 14 inches of snow in north-central Idaho as the storm closed schools and shut down sections of highways. Idaho State Police said all roads in Bingham County in eastern Idaho are closed and the agency is urging motorists across the state to stay off streets slick with ice and snow. Four highways in eastern Idaho were closed.

In Washington, the state patrol launched a plane equipped with a heat-seeking camera to look for stranded motorists from Seattle south to Olympia.

"Our aircraft can cover large areas much faster than ground based troopers," Sgt. Jim Nobach of the patrol's aviation section said. "We can also check those sections of road that troopers can't get to because of downed trees or power lines."

Winds gusting to 65 mph made matters worst by cutting off power Monday for tens of thousands of utility customers in Western Washington. Puget Sound Energy said most of its 90,000 outages were in Kitsap County. That number was down to 64,000 by 6 a.m. Tuesday, but spokeswoman Gretchen Aliabadi couldn't say when everyone would have their power turned back on.

Two people were killed Monday when the car they were in slid on a snowy road at Cowiche near Yakima and collided with another car, the State Patrol said. In Tacoma, a Pierce County Transit bus slid down a steep hill and overturned with about 20 people were aboard on Monday. Twelve were taken to hospitals, but no serious injuries were reported.

Temperatures should start to moderate Wednesday and there's a chance of rain on Thanksgiving Day in Western Washington, although it could start as snow. Eastern Washington temperatures are forecast to remain well below freezing into the weekend, forecasters said.


Let's be careful out there and have a Happy and Safe Thanksgiving.