What's better than one AeroStich Roadcrafter Light one piece suit?

This past Spring, I sent my AeroStich Roadcrafter Light in for repair, then when I got it back I updated my post review here:

I am incredibly happy with the customer service and communication I received from everyone at AeroStich,  more so the emails from the girls and staff that make things happen, but I'll give credit for the personal emails from both Kyle Allen and Andy Goldfine too.

As I mentioned in my repair review, I was impressed with the heavier stitching and thread they used to repair my suit, they also updated my zippers with new waterproof ones at no additional charge. Thank you again.

However, I believe it may have been my comment regarding the difficulty putting on my suit, due to the shoulder pads getting in the way when donning my suit, that prompted correspondence from the higher-ups at 'Stich. I received an email from Mr. Goldfine stating that they resolved that issue on the new R3 suit; how the R3 Light is now made entirely with the heavier thread, that some new R3 Light suits are made in the USA and that they can do custom alterations.

Lastly, he mentioned that if I could spare my suit again to send it back to them to retrofit the shoulders. I chuckled to myself, after being without my suit for several weeks, I couldn't possibly surrender it again.

The next logical thing to do was to simply order a new AeroStich R3 Light, right?

Again, the staff at AeroStich kept me updated via emails on my order, when it was being sewn and when it was expected to ship.

When I received my new R3 Light the first thing I checked was the stitching, yes they use the heavier thread for every seam on the R3.


The fabric is their 200D GoreTex nylon used on the previous suit, and it has double layers in the elbow, knee, and shoulder area. These same impact areas also have heavy duty hook and loop fastener system (aka VelcroTM) and the TF3 armor as did the previous model. It's the stitching that holds true here.

Comparing the two suits side by side, revealed subtle, yet well improved differences.

The back vent caught my attention right away. On my original suit, I couldn't figure out why the zipper was designed the way it was, other than "it is what it is". It would only open from either side or from the center, so there was little option for venting, left, right, center or all the way open.

The R3 Light back vent has a zipper that meets in the middle, so to speak. This affords me the option of venting a small or a varying amount from both the right and left side at the same time, as well as either being fully open or fully closed. Like I mentioned, a subtle difference that makes much more sense.

Additional (VelcroTM) has been added to the shoulder pads, so I no longer have to jump, or wiggle into my suit to get the shoulder pad over my shoulder. It slides overtop of my shoulder with much less effort. This was the one major hang up, (pun intended) that I had with my original Light.

The R3 and R3 Light come with their TF3 shoulder, elbow, and knee pads. However, the TF5 Transit Hip Pads and Hip Pad Sleeves (which should come as a set) and the TF3 Standard Back Pad are all optional and recommended by AeroStich. Just get them! I've been using the big, bulky, TF3 hip pads out of my AD1 pants and the smaller TF5 hip pads are much better.

The magnets are now in little sewn pockets, rather than heat seamed or glued pockets. I've never had an issue, but I have heard from others that the glue can fail.


I found this little button hole, which will come in handy for heated gear, I should have ordered an extension cord, but I didn't know the button hole was an added feature to the R3 Light. I have been using a battery operated heated jacket, but now I can go back to my wired, full sleeve, heated jacket. 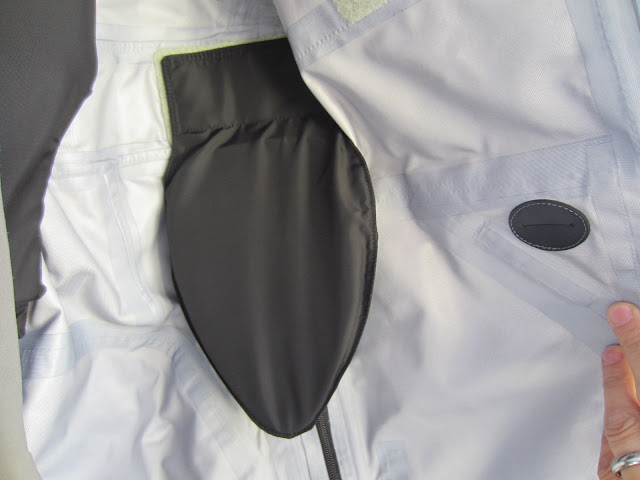 Made in the USA, not that I have anything against the Vietnamese, but I do prefer keeping jobs local.

I noticed the (VelcroTM) on the hip access pockets is more narrow than the previous suit. I don't know whether or not the wider (VelcroTM) was difficult to separate or pulling on it caused too much stress on the suit. I would think the heavier stitching would have resolved that issue without resorting to less (VelcroTM). I never had a problem, but a friend has had his (VelcroTM) come away from his suit.


I also noticed small pieces of (VelcroTM) sewn onto the underarm vents. Was there an issue with vents flapping in the wind? Do these help keep the vents open? Do they create a scoop? I don't know.


Overall, the quality, workmanship, and customer service is what I have come to expect from AeroStich, they are top notch and have set the bar for many other outfitters to reach. AeroStich is a company that designs, manufactures and sells a product that I can trust.

Thank you again to everyone at AeroStich, keep up the great work. I hope to make it to Duluth some day soon.


~ Our clothes are too much a part of us for most of us ever to be entirely indifferent to their condition:  it is as though the fabric were indeed a natural extension of the body, or even of the soul.  ~Quentin Bell