Monday came much too soon and Bobskoot was waiting for us in the parking lot of our hotel. The temperature had dropped overnight and the clouds were threatening our ride. Fortunately once we gassed up and headed north we left the clouds behind. We also caught up to Richard for a few moments before he disappeared from sight... and Bob calls me a spirited rider. 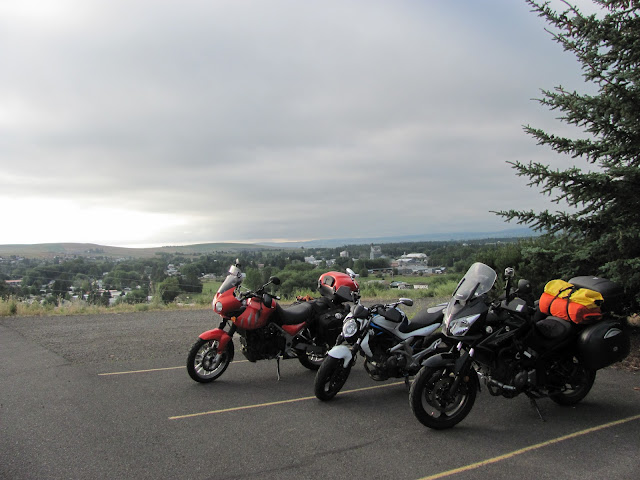 We mapped out our route the night before, considering Ukiah, 395 to Kimberly and Spray but thought better of it and save that for another weekend. We made it to La Grande and I-84 back down to Baker City instead. 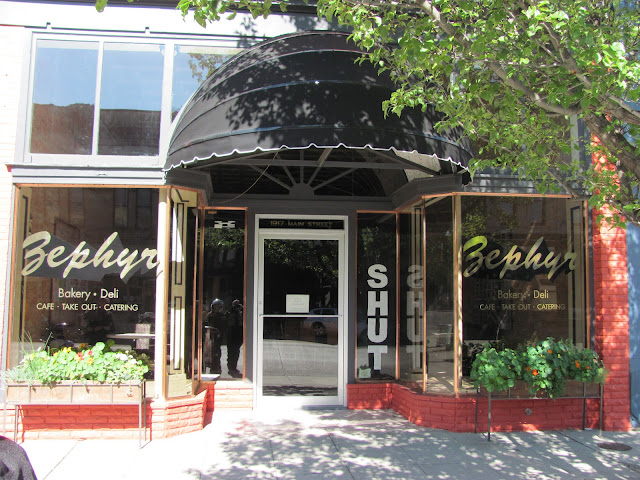 We found the Bakery we were in search of Saturday but discovered this most confusing sign in the window.

"We will be closed Monday, July 23rd" would have been much more effective. 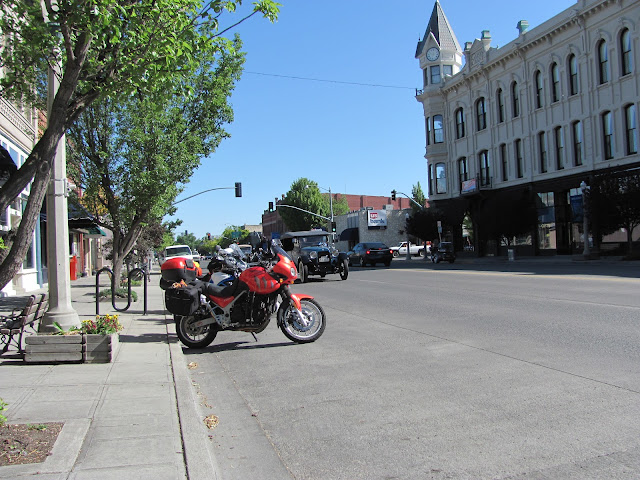 We had our own private little parade of antique cars down main street. 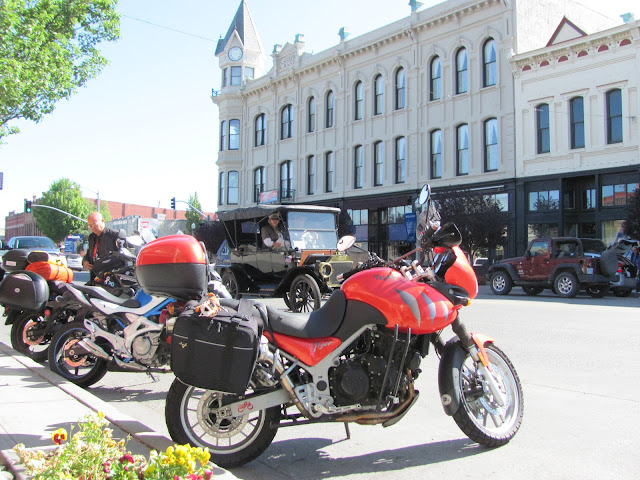 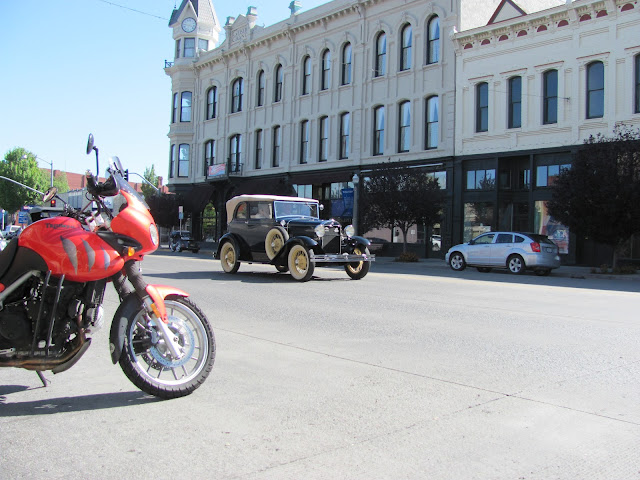 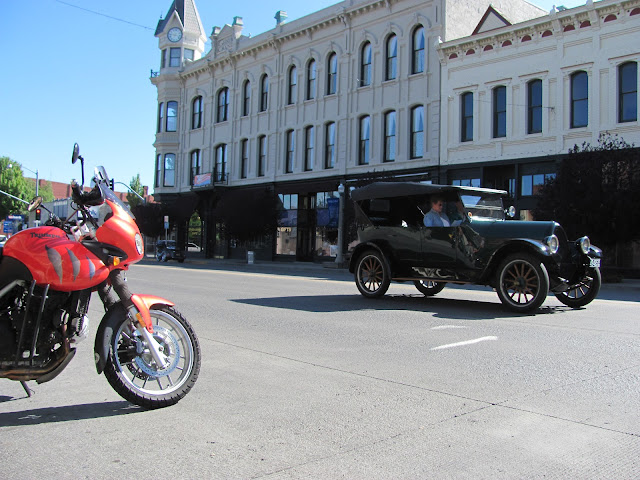 And caught up to them on the road to the Sumpter Valley Railroad, they were only doing a top speed of 40 mph so they were easy enough to pass. They were most congenial and we both waved at each other as we passed.


We stopped for gas and a bite to eat in John Day then it was back on the road. I remembered an overlook we passed Friday and since we were making good time I decided to stop for some photos. 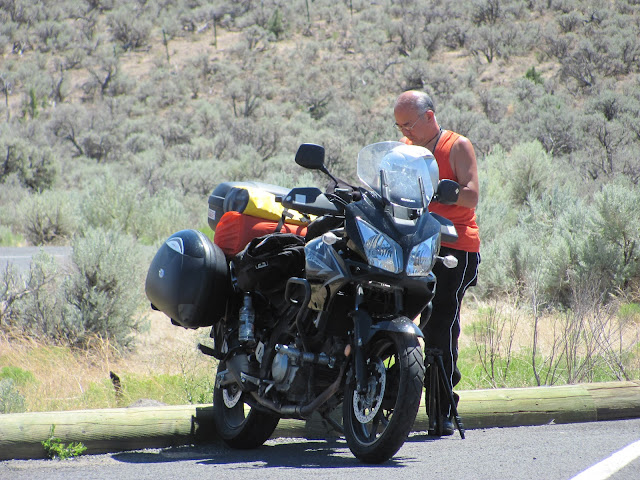 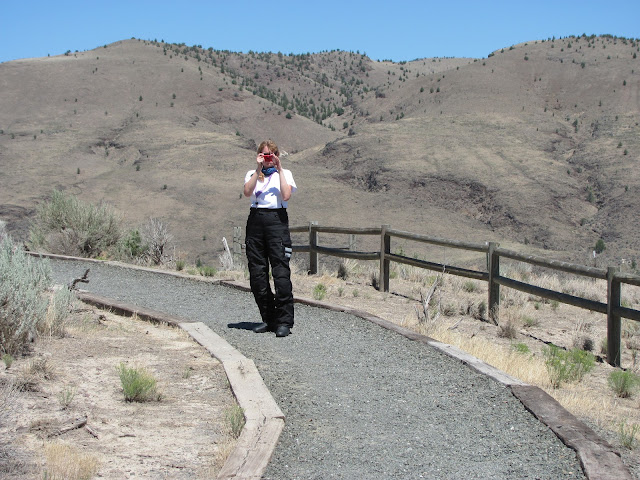 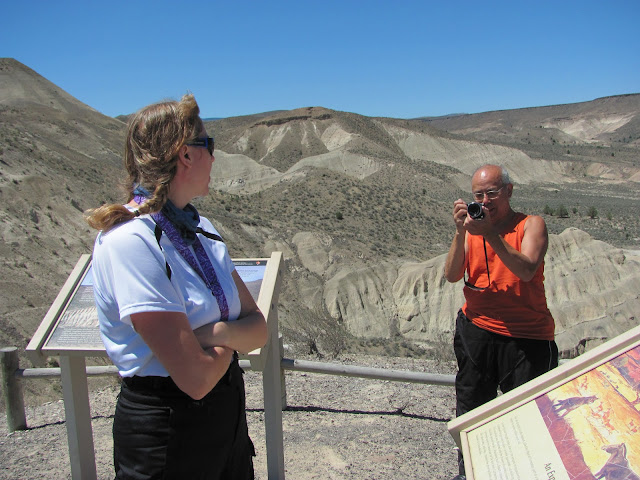 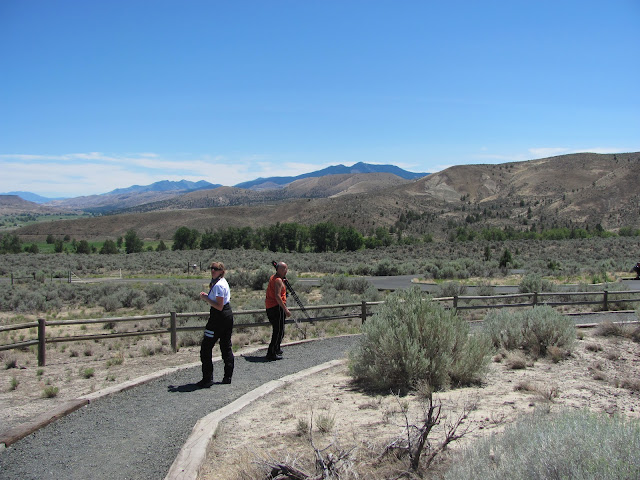 We made excellent time into Prineville but I should have remembered the heavy traffic between Prineville and Redmond on Friday. Congested areas usually warrant a police presence and Monday was no exception. Thank you for the brake light flash from your car Mr. Trooper, your message was received loud and clear.

We stopped once more in Redmond for fuel, found a Starbucks for something cold and caffeinated then said our goodbyes to Bobskoot. He was on his own from here on out and I offered him my stuffed Tiger as a teddy bear but as he sniffled, he wiped away a tear, pulled himself up by the boot straps and bravely declined the offer. He was off to REI for a Monarch chair and to find a precious Wi-Fi hotspot for the night.

The worst part of the trip was the 25 miles from Sisters to the Santiam Junction. I absolutely hate this section of road as everyone is in a damn hurry, yes even more than me, and if there is anyplace for more police presence it has to be here yet not a one to be found. I swear it was Sunday, this certainly wasn't weekday traffic. I watched in disbelief in my rearview mirror as a car passed Brandy sharing her lane, putting her between him and a concrete guardrail in a righthand sweeper. She handled it very well and fortunately I kept my cool and didn't put my boot into his door as he went by me. From then on I just pulled over and let cars go by us, it wasn't worth the fight.

The wind picked up as we made it into Sweet Home and it buffeted us from the north as we traveled across the valley floor. We thought of your battle with the wind Roland and thankfully we made it home safe and sound.

Thank you again to everyone who made it out to the iMBC of 2012 and I look forward to the next one in 2014.


We all decided it would better to take a day to visit rather than ride. After all, isn't that why we came, to visit with our fellow bloggers? 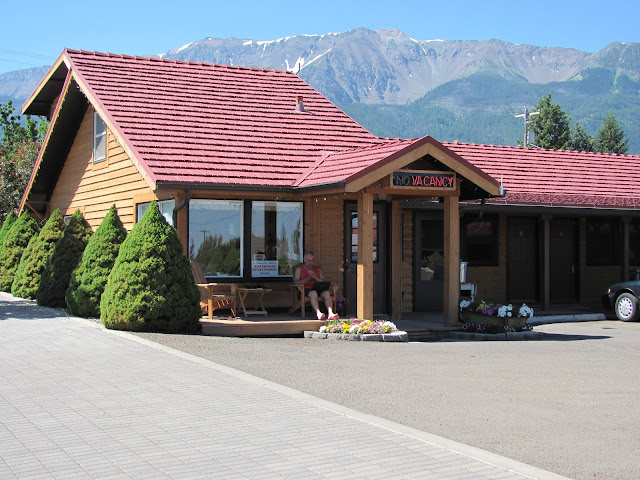 Sunday we found Bob desperately trying to find any Wi-Fi hot spot he possibly could, the poor guy felt gagged without his internet and his chosen media of expression. 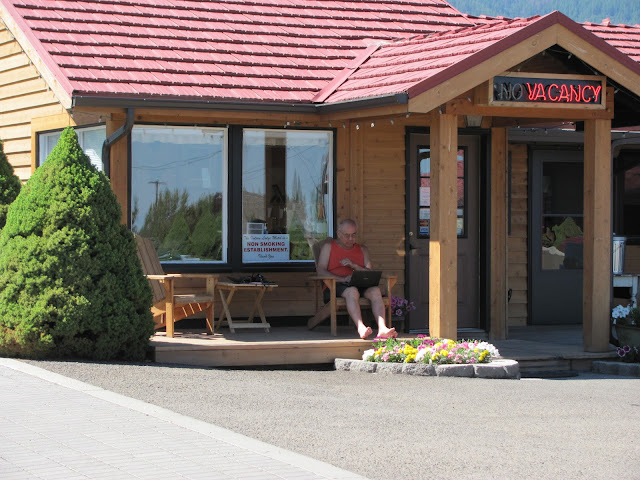 We wandered around Joseph and took a few photos while we waited for Karen and Erik to arrive. The town is full of bronze statues, Trobairitz took many more photos than I. 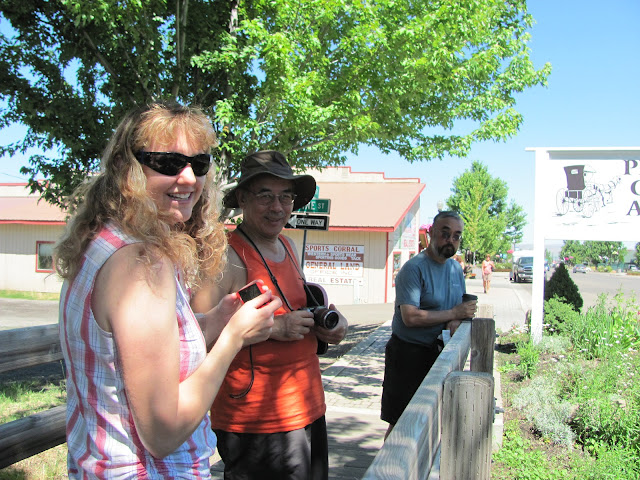 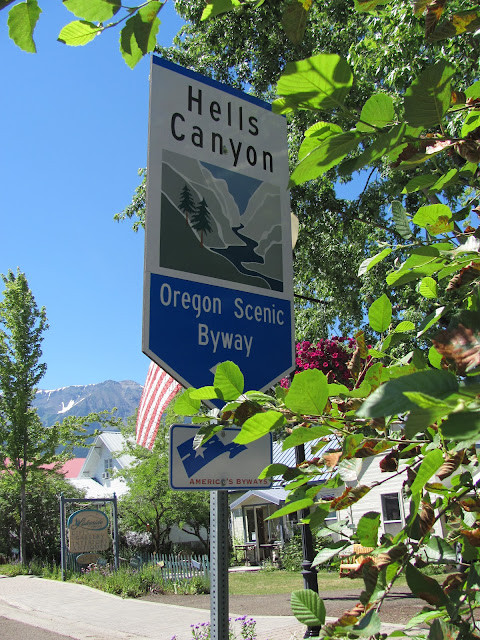 We found a shop that carried neon green Croc knock-offs or what we called "Croc-offs" for Erik. Bob found a shirt to match his pink Crocs. 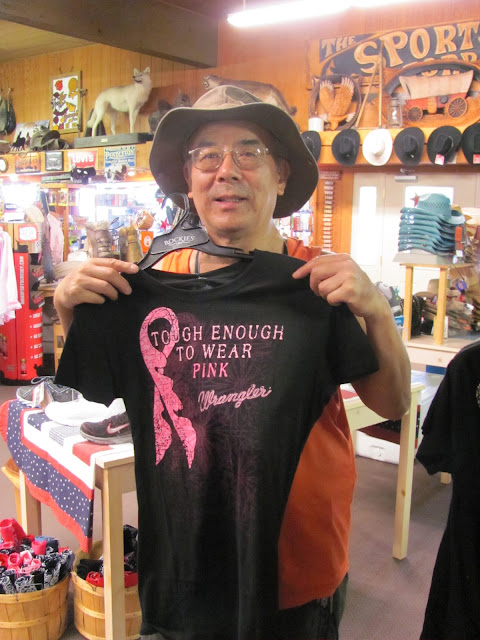 Brandy and I hadn't eaten all day so it was time to find some lunch...


I'm trying very hard to stay positive regarding the variety of food made available in "Cowboy Country" but when you have to explain to restauranteurs what vegan means you seriously have to wonder if these farmers nowadays even know what a vegetable is anymore. 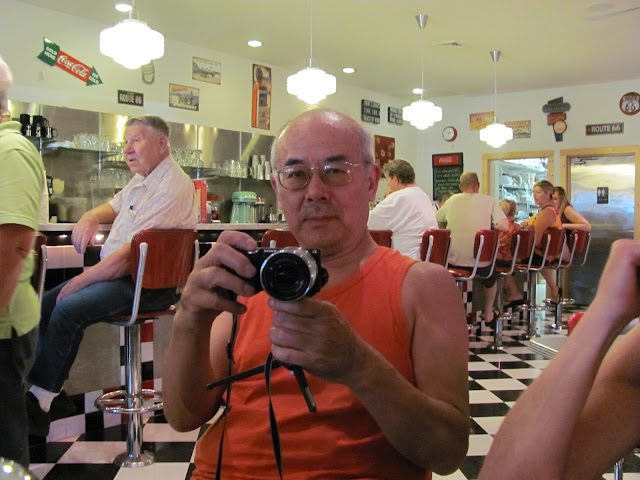 At least the company was fun and kept our waning morale up. Bob had a brown cow rootbeer float while Erik enjoyed a milkshake and Karen some huckleberry ice cream. We headed back to Bob and Richard's hotel/cottage to relax in the shade all day. 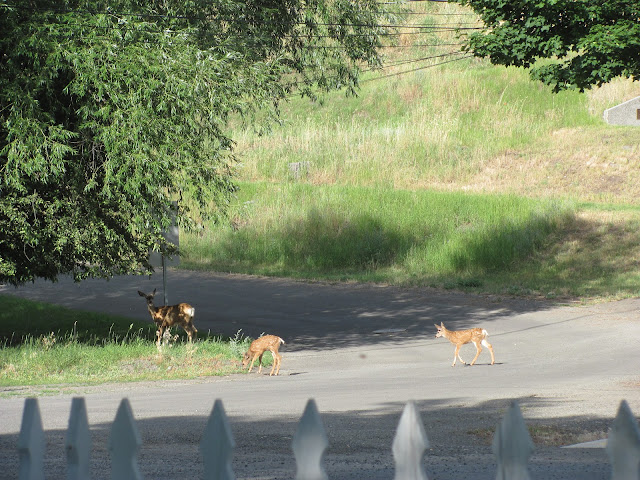 We watched momma deer and her fawns cross the street.

We chatted all afternoon under the canopy of a large maple tree and like the others said it was great to visit face to face rather than ride. I enjoyed the down day.


After dinner we went back to the bikes, suited up and said our good-byes. It was great to meet you Karen and Erik, I'm able to add an asterix to two more blogger titles on my blog roll as bloggers I have met.

Saturday we all planned to meet for breakfast before riding over to the dam. But the bakery we wanted to visit was blocked by barricades and a parade so we decided on Sumpter Junction Restaurant just down the street from our hotel and just off the freeway where we were planning to make our escape to Hells Canyon. 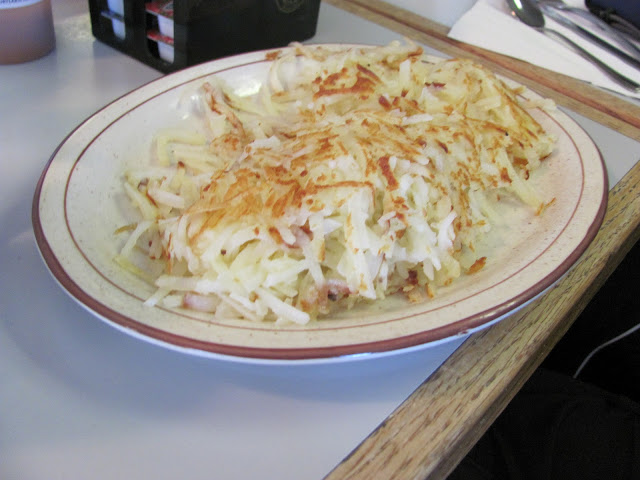 I suppose we could've asked to have onions, mushrooms, celery and peppers added to it but vegans know this is much more trouble than it is worth. Plain hash browns never tasted so good.

After breakfast we rode up I-84 two miles to the next exit 302 to highway 86 as our planned route was also blocked by the town's festivities. 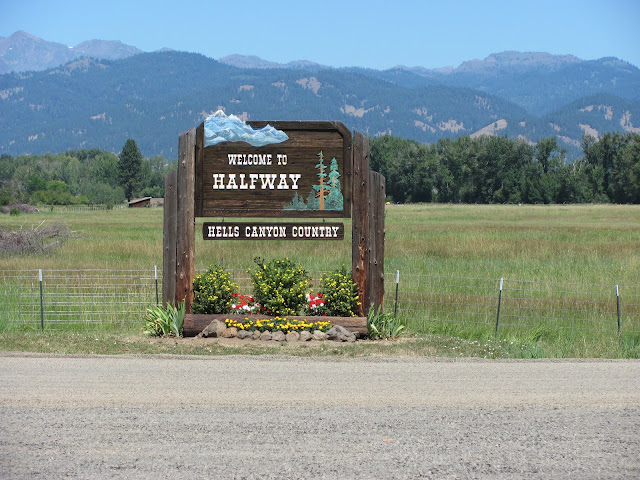 We made it to Halfway through some minor road construction and chip seal. This was the only time I could shake Erik and his ZX-14 from my tail as my Tiger was right at home on the loose gravel. I pulled over and watched the group assemble behind me. 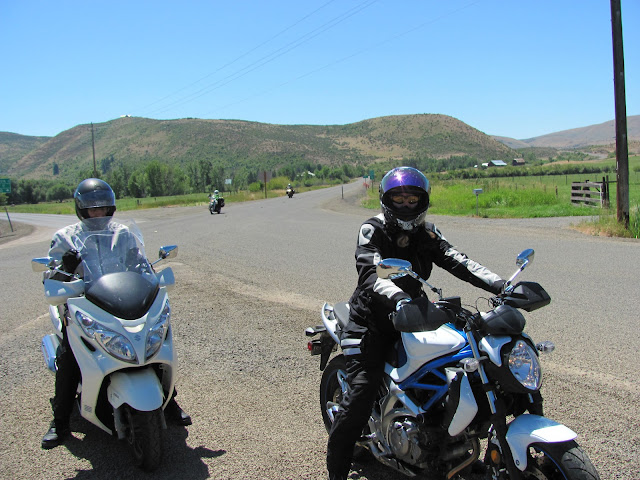 Evidently my camera stayed in my pocket all weekend, I was having too much fun riding. I didn't get any photos of Hells Canyon other than a short GoPro video which will take me months to edit. I stole these from Trobairitz...


We rode back to Oregon from Idaho side of the river and met everyone back at Scotty's service station before riding home to Joseph. 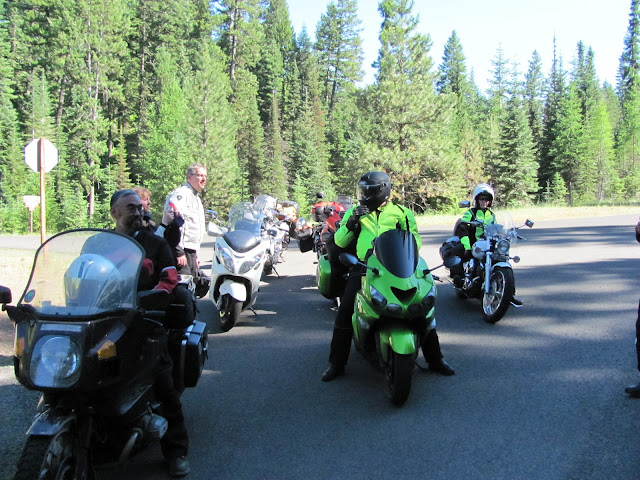 Here is the group gathered on NF39 from Hells Canyon to Joseph and where Karen proclaimed that she truly is a flat-lander. 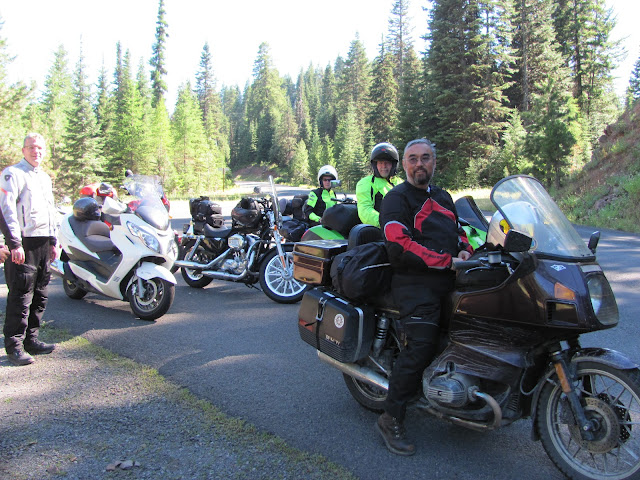 Although she tackled the Devil's Tail just fine, she mentioned being able to see the tops of trees from above is a bit disconcerting. 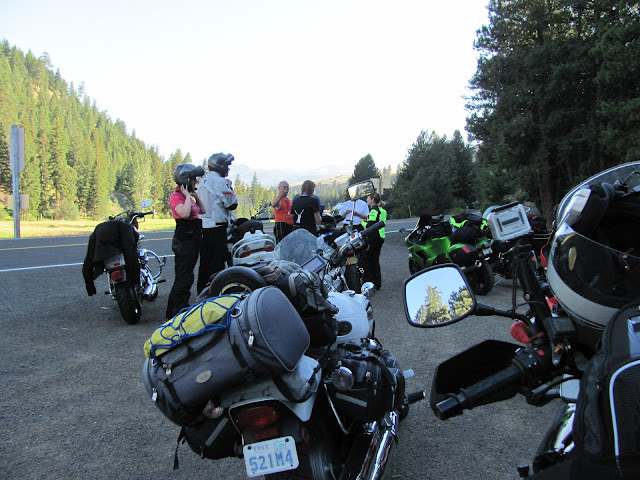 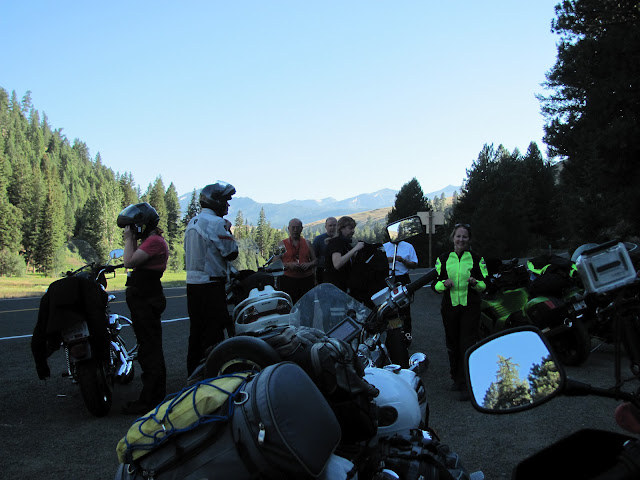 You did great Karen, despite teasing you we are all very proud and glad to see you conquer the mountain. 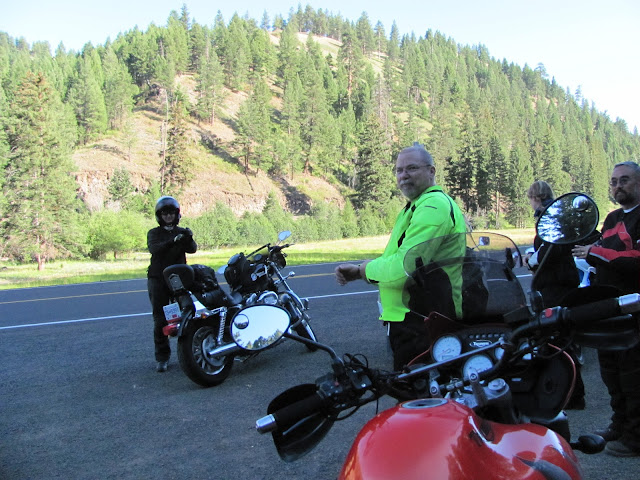 From here we headed into Joseph for dinner at La Bajio, reviewing the days sights and ride then to our hotel for a well deserved night's rest.