Thanks to Stacy for setting this up, this is a great opportunity to promote our sport and a chance to help new riders who may otherwise not get out and lose interest in motorcycling.

We will be riding in groups of 5 or 6 riders (including experienced lead and sweep riders). Depending on the turnout, we may end up with multiple groups, in which case departure times will be staggered.

PACE: 100% newbie. Posted speed limits will be strictly followed in all turns. The lead rider may choose to go even slower if necessary. We expect the ride will take 3 or 4 hours depending on road conditions and the pace chosen by the lead.

For full details and to SIGN UP, click here: 2009 Mid-Valley Newbie Ride
Posted by Troubadour at 6:38 AM No comments:

I started a post on a local forum about the best clam chowdah on the coast and asked for recommendations. We had a few submissions and I am sure we will have more as the season progresses. The only rule was it had to be on the coast, preferably within riding distance. One of the forum members chose a route and a small group of us headed out for a ride Saturday for the first chowdah crawl of the season. There were 5 bikes and 6 participants in total, Trobaritz rode with me so I called sweep, it is a nice change of pace and I feel more comfortable when riding two up. I can concentrate on my riding with the extra weight and responsibility and not count bikes in my mirrors or concern myself with several bikes on my tail through the turns.

One turn in particular is a 30 mph left hander about 6 miles from our starting point. It looks innocent enough and not that difficult to execute but something about it upsets riders and drivers alike. I have had prior experience with another rider not making this turn a couple of years ago. I got into the turn a little hot and had to scrub off some speed before diving into the turn, the only other rider behind was way back and not crowding me at all but as I exited I saw the cloud of dust in my mirror as he failed to negotiate the turn. He kids me about throwing marbles onto the road as he lost traction with his front tire and low sided. I don't know exactly what happened but I blame the curse of this corner. His bike hit a fence post and he seemed to be alright as he insisted on pulling his bike out of the ditch and riding home. I followed to make sure he made it home okay and learned of his fractured vertebra days later. 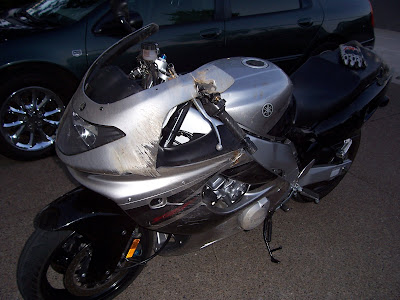 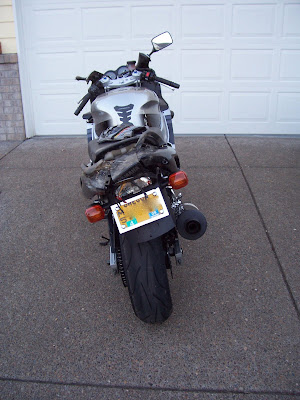 Saturday, the curse upset another rider, third in line of the four bikes in front of me. This time we weren't riding that fast as the leader is cautious in the corners and the first two bikes made it through just fine. However, rider #3 ran a little wide, and we thought he was going to save it, but went off the shoulder and managed to keep it upright before gently setting it down in a flower bed. Fortunately he was alright and didn't even scratch his bike, sans the left mirror. But again, before we could get off our bikes he hefted his bike upright and tried to push it onto solid ground. He wasn't seriously hurt and rode with us to the coast for chowdah but headed home shortly after. The adrenaline had worn off and his body was starting to stiffen up and get sore. 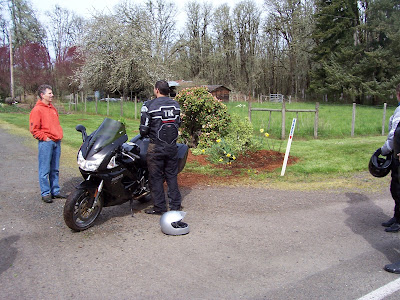 I believe he hurt himself more from lifting his bike than the crash itself. Please just hit the kill switch and let the bike lay there, it isn't going anywhere and have your buddies pick it up for you. Adrenaline is your body's response to an injury or traumatic experience and a fight or flight mechanism, not a heft your 500+ pound bike off its side and strain your milk mechanism.

Not the same corner, but just over two years ago I experienced the same pit in your stomach, what an idiot, I can't believe I just did that, stupid, stupid, stupid, feeling after a crash. But I knew to relax, assess the situation, calm down and then get help to pull your bike out of the ditch. 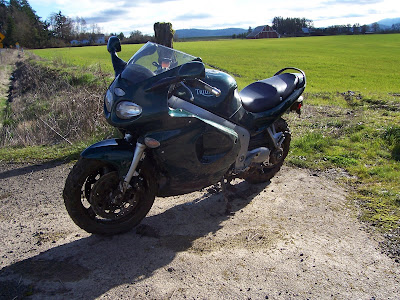 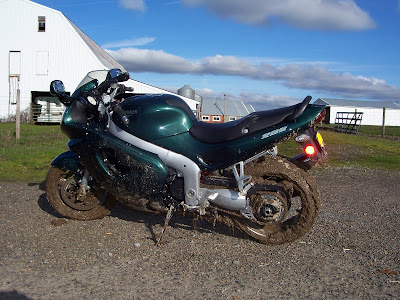 I called a friend with a Jeep and a winch to help me out. Since then, I've sold that bike, bought a cruiser and learned to slow down....alot.


The rest of the day did turn out alright considering the morning's mishap. The chowdah run continued to Luna Sea in Yachats... 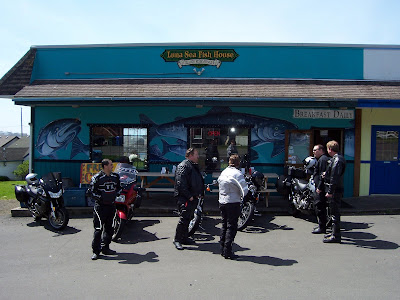 and although the chowdah only received a 3 star rating, the ride and fellow riders were great, one of them I learned is a neighbor of mine. There are many other chowdah runs to be planned this summer, but until then, shiny side up.

We have seen some bad weather the past couple of days. Heavy rain, wind and hail but only brief intermittent storms. I work in a building with lots of windows so everyone in the offices has a pretty good view of what the weather is like at any given time throughout the day.

Working in the shipping department we face the parking lot and the shipping docks and I get to park my bike right next to the building outside the shipping desk. Many of us stroll up to the window during the day and gaze out to freedom and the busiest window is where my bike is parked, which is great for security because I can see it from my desk and I know when a truck driver is eyeing it or someone gets too close, co-workers let me know.
So when the weather turns nasty, some of the first comments I hear is about riding my motorcycle in such weather. "Why would you ride your bike today?" or " I wouldn't want to be on a motorcycle in this storm." To tell the truth, neither would I and you know what? I'm not. I'm standing right beside them staring out the same window watching the hail and rain beat against the window. I think because my bike is right there that they associate the bad weather with me riding.

Do I confess that the calmest part of the day is first thing in the morning, during the sunrise when I am riding to work? Nope, I am a hardcore, year round, wet weather rider and I laugh at the hail, wind and rain.

As motorcyclists we've learned to watch the skies, we know what to look for and we can usually predict local weather patterns during particular times of the year. We watch to see if a storm is moving North to South or from the West to the East and as it poured down rain today, 10 minutes to quitting time, I looked to the West, saw all the blue sky, waited five minutes for it to clear up and I rode home in the warmth of the sun on my face.

Last weekend was absolutely gorgeous weather, clear blue skies, mid to high 70 degree temperature and the bikes were out. A lot of bikes were out, so I stayed home.

I'd rather stay home during the first nice weekend of the season and soak up the sunshine, clean up the yard and mow de lawne than to suit up, cover up and block that vitamin D. We even went for a hike up Bald Hill and enjoyed the view and peace and quiet.

The highways are not a great place to be on a bike on the weekends this time of year as everyone pulls their bikes out of the garage and hits the road. Stir up the oil, burn up the old gas, rotate the tires, blow out the cobwebs and "remember how to ride a bike" (an actual quote from a rider I know who works for a trucking company). The skills required to operate a motorcycle have atrophied over the winter and I understand it takes a few rides to get your groove back.

Everyone was out in droves on Friday as I made my way home from work. I heard them roar, scream and whizz by all weekend and I passed many more riding home from work on Monday.

What really makes me laugh was how some riders refused to wave as I passed. I can't figure out these riders or ever intend to but as I understand, these hardcore bikers won't wave to motorcyclists other than their HD brethren. Now how you can tell an HD from a Yamaha or Kawasaki V-twin at 50 mph gets me and maybe a Triumph parallel twin is easy to spot. I just laugh, where were these tough guys all winter while we were riding in the rain, in below freezing temperatures welcoming Mother Nature's challenge and keeping our skills sharp year round?

BTW, I only saw one other bike in the Wednesday and Thrusday rain.

To all the other riders, welcome back, glad to see you again and keep waving.
Posted by Troubadour at 6:36 PM No comments:

Wow, a new month already, it is difficult to believe it is April. I have been nose to the (computer) keyboard booking trucks and coordinating shipments of grass seed throughout the month of March.

With the economic downturn, all of the hardware and big box stores we ship to had postponed bringing in stock because they didn't want to store it nor to have to pay for it right away. We are normally busy shipping grass seed as soon as the Christmas trees are tossed and the garden centers are stocked with patio furniture, fertilizers, grass seed and colorful nursery plants in January and February. We had nary shipped a pallet during the first two months of the year and all the stores waited until the last moment to place orders. March came in like a lion and went out like a lamb. My desk has been buried with orders all month and I briefly saw the top of it yesterday before new orders came in for April. I do consider myself fortunate that I am busy and have a job and I thank all of you out there who are reseeding and over seeding your lawns while on 'stay cation'. You have decided to seed your lawn yourself and that means you are buying your seed from the hardware stores and hopefully considering their house brands.

I've looked up from my keyboard to find that Spring has arrived, everything is starting to bloom and it is time to take care of some over due maintenance on the bike. I finally got the front wheel into the shop to replace the tire and I ordered some new brake pads. I replaced the OEM Metzler Lasertec after 7400 miles with a Kenda Kruz K673F 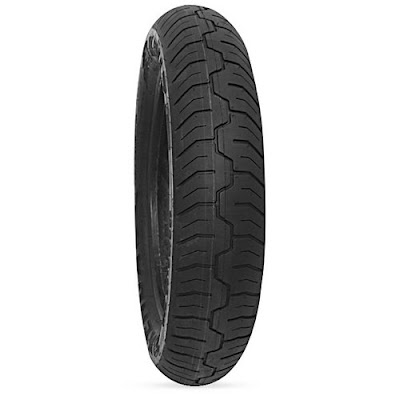 I have Kendas on my KZ, I never kept track of the mileage but I know I rode several seasons on them and I am hoping for the same longevity from this one. I will replace the rear with a Kenda as well but the OEM Metzler will hold up for another couple thousand miles before needing replacement. I hope it'll get me through to next winter.

I've got an extra oil filter in the garage and I'll need to pick up a few quarts of synthetic. I'll have to get her down to the shop for a once over and some fine tuning, but I think I can get in some riding before the lawn mower and garden tools start calling to me.