You hear about the two second rule all the time, but are we aware of the one second rule? We all have to wait just a little bit longer for spring, evidently 2008 is a year of the "Leap Second".

I chuckled when a forum member called it global slowing.

News article: 2009 to Arrive Not a Second Too Soon

For today is Winter Solstice, the shortest day of the year.

A few years ago, I mentioned to a friend that I wanted to secede from of a certain holiday that occurs at this time of year, the commercialism and reciprocity. She invited us to participate in one of her traditions of celebrating Winter Solstice, gathering with friends to tell stories and anoint a mighty oak. Needless to say, this piqued my interest and we now have joined her in this tradition for the last three years. We quip painting ourselves blue and dancing naked in the forest but have yet to find one of us hale and hearty. Instead we eat, drink and merrily begin our quest for a mighty oak to anoint with what red wine we have remaining. Fun is had by all, in the rain or snow and every year since, the days get longer and the sun more prominent.

We stopped celebrating Christmas all together, no tree, no gifts, no shopping and went back to the basics, to truly contemplate what was important.
Friends and family still wish us a Merry Christmas, Happy Holidays, sending gifts and cards in the mail and all arrive without caveat. Their traditions are respected and they all acknowledge ours, and in hopes that we may adopt traditional customs again, unique rituals merit distinction.

We have had some snow in the area this past week, and by some snow I mean enough to close schools and businesses. I think the most accumulation we've had is 2 inches. It is not unusual to get a couple of inches for a week once a year but it is enough to shut this town down. It has taken me many years to accept the fact that the majority of the local population does not know how to drive in the snow and ice and that studded tires and mandatory tire chain requirements are normal.
I learned to drive in the snow, my birth date is in January so I took my driving test in the snow and I am familiar with driving through the deepest snow in some of the highest mountain passes of British Columbia and Alberta. I've lived in Rossland and Nelson, B.C. so I know snow and I consider myself an experienced driver in snow and ice.
Unfortunately, the other day a driver in the left lane of Highway 34 doing 20 mph believes it is his civic duty, based on his personal winter driving experience, to police everyone behind him. He drove for miles pacing the car in the right lane beside him. We finally got by him but had to go around him on the right as he refused to move over. He is unsure of his driving ability in the snow so he is cautious and drives 20 mph. I understand and support him completely except that he should be in the right lane as he is impeding traffic and creating a greater hazard. Everyone behind him was driving bumper to bumper, door to door, like Irondad describes, a school of fish.
What bothers me is that I am being policed by those who don't know me. This isn't new to anyone who rides motorcycles, we are seen as squids, bikers, hooligans and just plain irresponsible. The only reason to ride a motorcycle is to go fast, and the public perception is exactly that. We ride slightly faster than the flow of traffic, so of course we are labelled as speeders, regardless that it is safer for us.
What people don't understand is that motorcyclists make better drivers, especially in snow and ice. We are attentive and just like we do on our bikes everyday, we practice the physics of momentum, centrifugal force, friction and traction. We don't stiff arm, white knuckle, death grip the steering wheel and drive with one foot on the brake. We ease off the throttle and ease on the brake in one fluid motion, keeping our heads up, our eyes forward, anticipating the SUV, five cars ahead of us, sliding 360º into the guardrail. We don't panic, but assess the situation, survey the traffic behind us in our mirrors and choose our escape plan, execute and get away from the pile up about to ensue. Of course being motorcyclists, we try to never put ourselves in that situation to begin with, we ride in the open, and are constantly scanning our mirrors.

Unless some inexperienced driver blocks the left lane to teach us all how to drive...in the school of fish.

I finally made it to my favorite motorcycle accessory shop recently, Discount Motorcycle Parts in Eugene.

Steve and Annette have run the shop for over 15 years and are helpful, knowledgeable and always friendly. We wander in there to look around, try stuff on and Annette will check up on us to see if we have any questions and then leaves us alone, but is always available when needed. I think that is why I like the shop so much, I am not jumped on as soon as I walk in the door and we are not followed or badgered around the store and out the door like other shops. I don't alway purchase something when I visit but I do more often than not. They stock a wide variety of accessories, pretty much everything you'd need and they will order whatever they don't stock which arrives within days.
As a bonus, there is a great bagel shop a few doors down in the same strip, The Daily Bagel. This is a great little shop and whom I assume is the owner makes it a point to greet you when you walk in the door and his service is above and beyond. I haven't had a chance to chat with him as he is busy, but I will make a point to at least get his name next time I'm in. Great sandwiches, service and staff.
Sure beats the fast food joints.

Anyway, the cold, dark months of fall and winter have me looking for ways to extend or improve the riding season. I wrote a little while back about riding in the rain and how I managed with this challenge but I never overcame the visibility issue. Until now. I talked to Steve about the Pinlock visor system to eliminate fogging and found out that a universal kit it is unavailable but he recommended the FogCity pro Shield instead.

While Steve was actually showing me how to install it, a customer came in with his visor in hand to buy another FogCity insert to replace his old one. I asked him how he liked it and I interrupted myself with "duh, you're in here to buy another one".
I got home, installed it and couldn't wait to try it the next morning. I can't believe how well it worked, I can breathe again! I used to wear glasses behind my visor because I had to ride with my visor open for venting, but this only created another surface to fog up. I tossed the glasses in my saddlebags and now just use the visor, closed. I do open it to vent while stopped at traffic lights as condensation will form inside the visor but it quickly clears up when on the move again. The insert creates a pocket of air between the visor and insert and creates a minor halo effect with oncoming lights but not nearly as bad as fogging does. For less than $20 bucks, I highly recommend it.
The next problem to deal with was lighting, I can't see anything in the dark and rain with just the stock headlight, so driving lights were in order. I researched lighting and found positive reviews on the Optronics QH-7CC Competition Series Round Driving Lights and I didn't want to spend a small fortune on lighting that didn't mount or wouldn't work, so to ebay I went.
These lights are also available through JCWhitney but CarParts accepts Paypal, are a wee bit cheaper and are quicker to ship.
These lights are great, I've mounted them under my headlight and they light up the road very well. 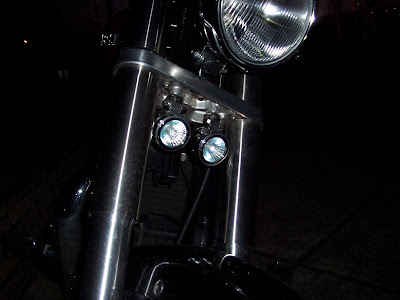 I haven't had oncoming cars flash their lights at me for being too bright, but the guys at work tell me they are bright. I wired them direct to the distribution block and relay for my horn and heated grips without a switch, but I may have to install a courtesy switch for group rides. 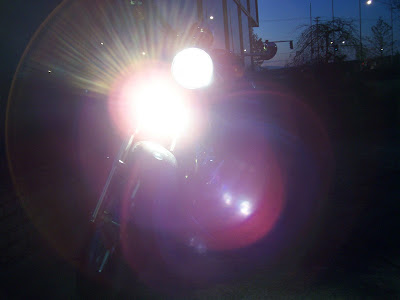 I'll do that when I wire my new LED signal/running lights this week. More reviews and plugs to come.
--
Posted by Troubadour at 10:00 PM 6 comments:

Monday was back to work after a four day weekend. I didn't get out and ride this weekend like I had wanted to, but opted to stay home and work on a project we started Thursday. We have been planning to replace the original aluminum sliding door in our house for months and I have been procrastinating just as long. I waited for a four day weekend to tackle the project in case we ran into the usual difficulties such as dry rot or unconventional rough opening measurements. We had taken up the old linoleum and floor underlayment on Thursday so we could fit the door on Friday (when the stores were open in case I needed something). 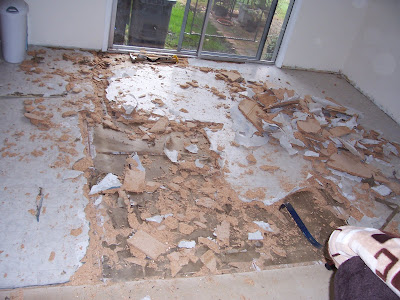 A future project on the to-do list is hardwood/engineered floors and this requires the floor transition from livingroom to diningroom to be equal in height. Why is it one project can't be completed without another started? It's all about logistics.
Fortunately, it was a clean removal of the old door and the new French door went in without incident, leaving the rest of the weekend to ride...or not.

Well, just because the door is installed doesn't mean the project is complete. So Saturday morning, down went new underlayment, just leaving door trim to be installed. I seriously considered leaving the trim for another day, but I felt my procrastination would come back to bite me. Besides I was already dusty and all my tools were strewn about. Riding would wait until Sunday. 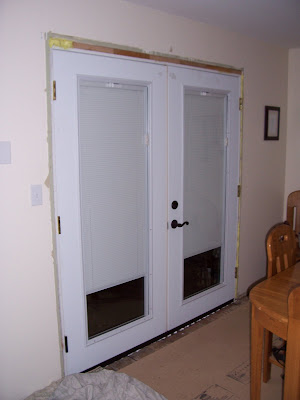 I had the new trim around the new door by dark, but the old trim around the other two doors in the room didn't match and needed updating which meant replacement.
And there went Sunday...but on the bright side, the job is done and I really wouldn't have enjoyed a ride anyway knowing I left the job unfinished.
Posted by Troubadour at 10:28 PM No comments: