Trobairitz and I now join the ranks of those that have been to Vegas. A generalization to say the least and not a fair assessment of the city of Las Vegas, so I should say that we've been to "The Strip".

We flew into LAS Saturday morning and made our way to the train that would take us from the satellite terminal to the main terminal. We then found a shuttle bus to take us to the hotel and enjoyed the sights through the bus windows all the while calling out to each other the hotels and casinos we've seen on television and movies, adding the odd ooooh and ahhhhh for effect. We were anxious to get to the hotel, drop our bags, grab a bite and go see the sights. 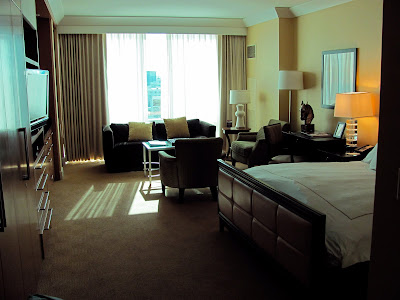 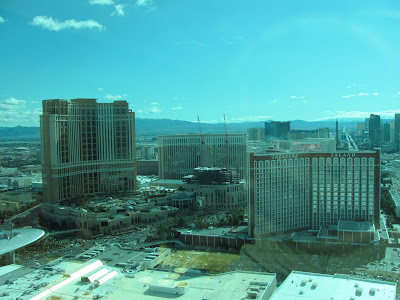 We knew that the strip was just out the front door from the hotel and through the Fashion Show Mall. RA Sushi would have something light to eat and get started on our trek. 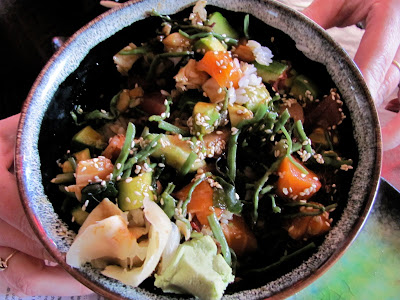 Heading south from the mall, the first hotel was Treasure Island, featuring the "Sirens of TI". 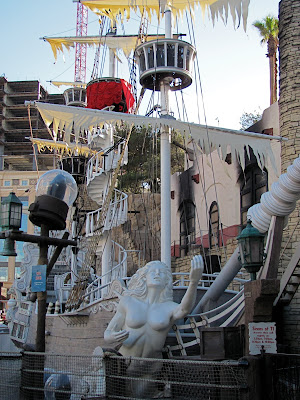 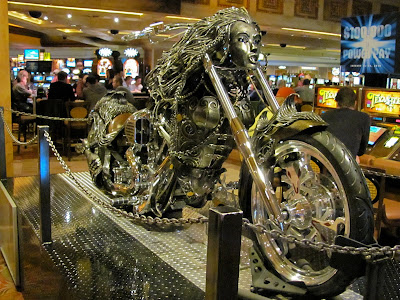 We continued south and across the street to the Venetian. The sunshine was beautiful, a rarity in Oregon and we wanted to make the best of it and walk the strip. We figured we could walk through the casinos and shopping centers after dark. 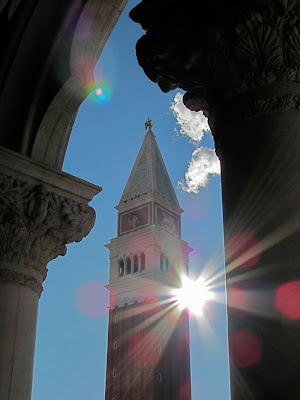 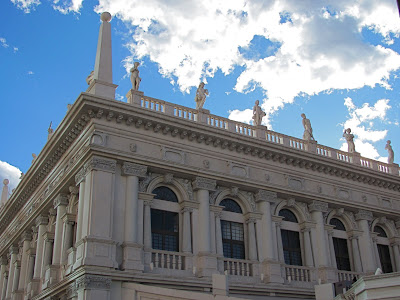 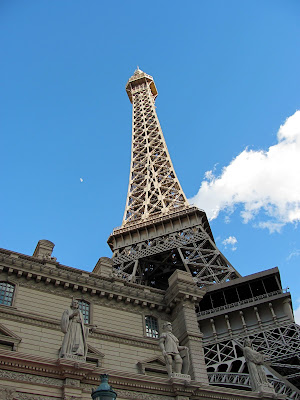 We made it to the Excalibur before we got thirsty, ordered our first yard o' margarita and headed to the Luxor. It was at the Luxor when disappointment set in. This is it? This is "The Strip"? We talked about whether or not to walk down to Mandalay Bay at the end of the strip but figured it would be just another casino and decided to head back up the strip. 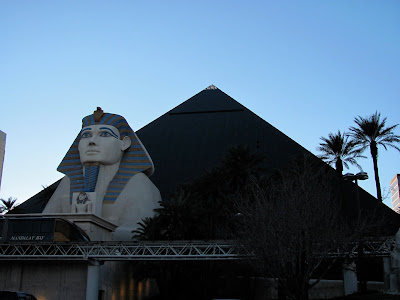 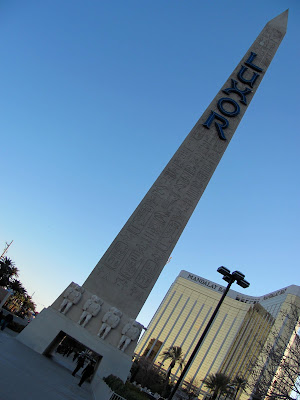 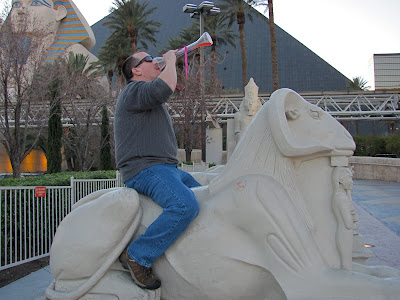 We skipped back and forth across the strip, checked out a few more hotels and casinos. Grabbed another overpriced margarita, threw a few bucks into the slot machines, lost, a few more dollars, lost some more and then I figured to make the best of it and party. 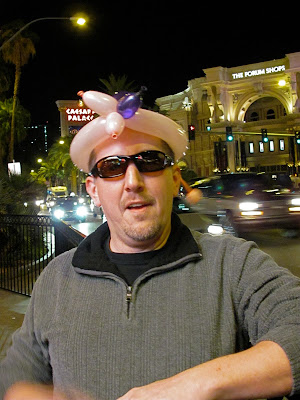 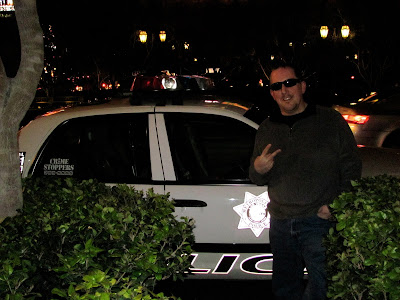 We wandered around the Bellagio, lost more money in the slots, back through the Venetian, lost some more, back to Treasure Island slots then back to the hotel. 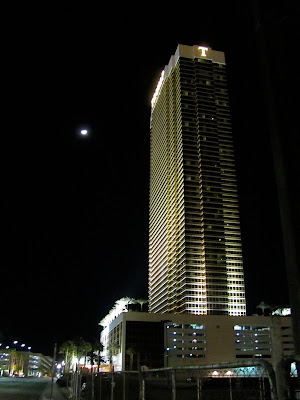 Eager to visit Freemont Street the hotel bell chief offered to have a bellhop take us there in the hotel car. Unfortunately, he was more interested in the gratuity than letting us know we were too late for the show. 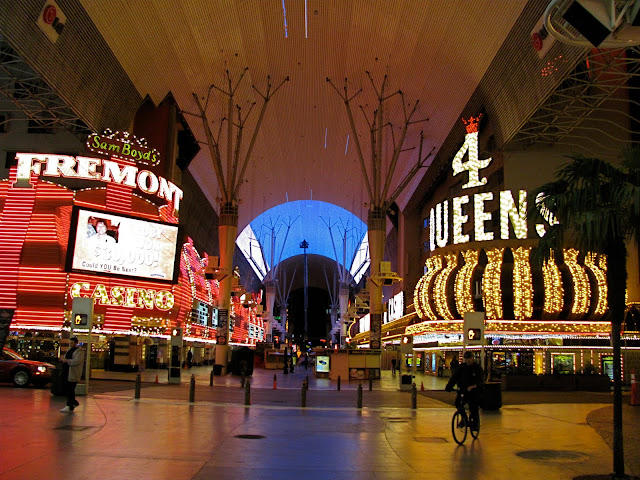 We wandered around the lifeless streets, checked out Main Street Station, had some dinner and then called it a night...more like late morning. 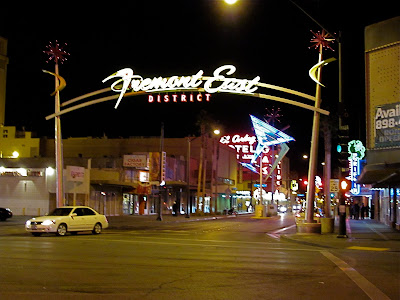 I am so glad we chose a hotel off the strip. It was nice to get away from the noise, lights, card flickers and barrage of advertising.

Waking up Sunday morning overlooking the strip in the cold light of day had us wondering WTF to do today? We did everything we wanted to do Saturday night. We were trapped, on foot, on the strip. I couldn't walk into another stinking casino, it wasn't the smoke, it was that deodorizing, neutralizer smell. We were ready for home. We went down to the mall for Starbucks and tried to find something to do, so we headed for the Stratosphere. We made it past some construction as far as Circus Circus and turned around to go back to the hotel. The strip was not us, Vegas was not us, we were experiencing sensory overload. We just relaxed in our room for the day and just wanted to see the Cirque de Soleil show before going home to quiet, naturally beautiful Oregon. 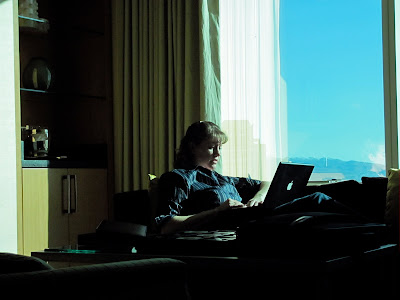 We wandered down to the Venetian canal shops before Treasure Island's Siren show started (cancelled the night before due to high winds), that was pretty cool. 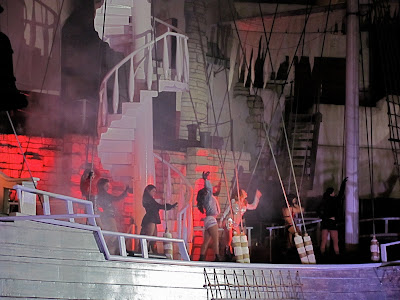 Meandered over to the Mirage to watch the volcano, cool. 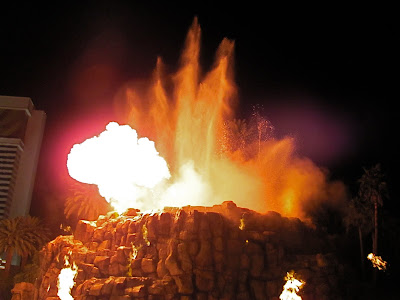 Then into the Mirage to watch The Beatles - LOVE, now that was awesome!!!! That show alone saved the whole trip, all I can say is WOW!!! 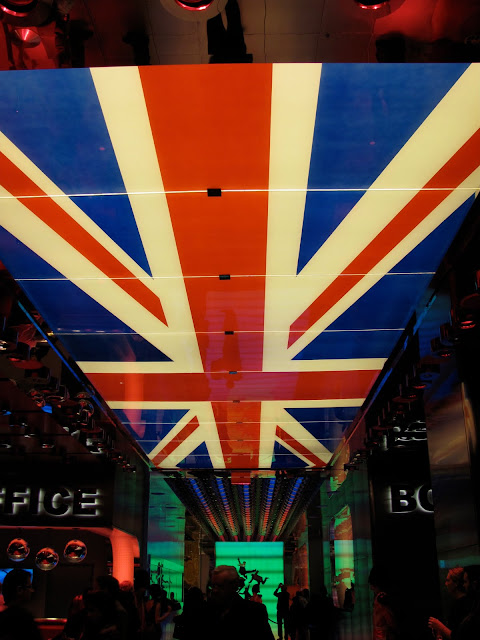 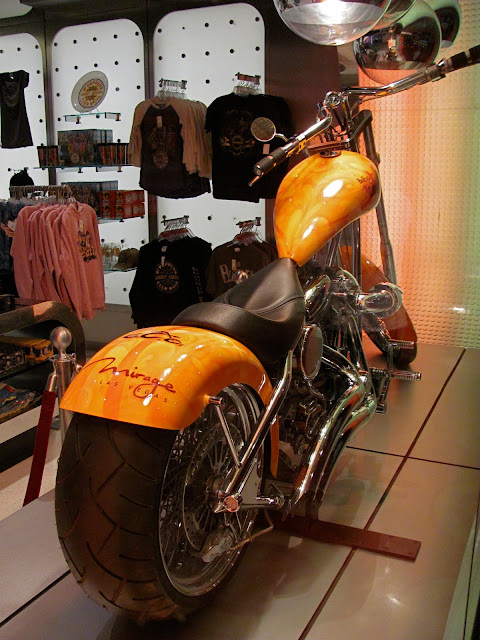 I know we missed a lot of sights, it was unfortunate we were trapped on the strip, I know there is much more to see, but we were running out of money and getting tired of the facade of the strip. We spent the third day in our room watching TV and in the airport hoping for an earlier flight home. It took me two days to find the right words to describe "The Strip" and it wasn't until Tuesday morning I came up with ... a polished turd.

Once you get through all the shine and glitter, it's just crap.

I had fun Saturday, the show was absolutely fantastic and I don't regret going, everyone must go at least once. Would I go again? Not likely, we are more the "staycation" type. We prefer parks, trees, mountains, lakes and rivers. Natural wonders.

I am home, I am happy and I was sure smiling riding the Triumph into work on Tuesday morning. It's the little things.

Evidently I am turning forty this year, I don't think it has hit me as hard as thirty did. When I turned thirty I was chained to a desk and much too young to be pushing paper and getting lazy, so I quit my job, took a landscaping course at the local college, then moved from British Columbia to Oregon, all within the first year. Then I spent the next seven years selling cars, humping furniture, digging holes and planting trees for a plant nursery while running my own lawn maintenance company on weekends. All the while, cursing the Oregon rain trying to find another desk job. A decade later I finally found that job, still too young to be chained to a desk...but this time I am a whole lot wiser, much happier and not nearly as lazy.

We've accomplished a lot in ten years, much more than I had in the previous ten years. Getting married sure puts a stop to the partying and squandering in a hurry, good thing too as I'm not so sure I would have made it to thirty, never mind forty.

Never be afraid to slow down.

This weekend my wonderful wife is taking me to Vegas for my birthday, I've never been, should be fun, I'll let you know.

You start the game with a full pot o' luck and an empty pot o' experience... The object is to fill the pot of experience before you empty the pot of luck.

I went for a bit of a ride Saturday, just under 50 miles to Eugene. The morning started off damp and foggy but it cleared and dried up enough to make it quite enjoyable. I stayed off the main roads, avoided heavy traffic and just appreciated the ride. Just like the long distance, iron butt, big dogs, Trobairitz followed me in the chase vehicle, I needed a lift back home as I was headed to the Triumph shop to drop off the America for her 12,000 mile check up. It was due for a valve adjustment, carb sync, oil change and to finally resolve the throttle lag I have been experiencing. I left the bike down there for the week as not to rush the mechanic. I've been riding the Ninja lately, but rode the America for the Polar Bear Ride so Trobairitz could ride pillion. Getting back on the Triumph made me realize how bad the throttle lag was compared to the Ninja and how I could not tolerate any longer. I'm appreciating the fairing of the Ninja through the winter and have grown accustom to how much better it handles the nasty weather. Is it a bad thing to have a winter bike and summer bike? The America did not fair well on the 70 mile pouring down rain Polar Bear ride, it didn't go down but it wallowed through some of the gravel laden turns and intersections. The Ninja is like its name, a much lighter agile bike.
While prepping the Triumph for the shop, kinda like cleaning the house before the maid arrives, cleaning the sand and road grime from around the airbox intake, I was inspired by Lance and decided to see what it would look like without the pillion seat and backrest. Although, I didn't get any pics I like the look and Trobairitz even said it was like following a different bike. Unfortunately, my saddlebags won't fit without different mounting posts, but I could throw the tank bag on in the meantime. I'll ride it naked on nice days for a month or so or until Trobairitz begs me to take her for a ride.
While in Eugene we stopped by to visit the family and their new scrapbook store. We also stopped at Wal-Mart to look for a new camera battery. Carrying your camera in your side pocket during a wet polar bear ride makes for a wet camera, it was floating in rain water that had collected in my pocket. Thank you to Rick for suggesting to put the camera in a bowl of rice as this will draw any moisture out of the camera and it worked well but the battery will no longer hold a charge. While shopping for batteries, Trobairitz reminded me how much she disliked that little point and shoot and if we were going to put $40 into a battery she'd rather put that money toward a new camera. I love it when she whispers in my ear and she didn't have to tell me twice, but which camera? Bobskoot recommended one when we were in Seattle but I could not remember which one it was, I'd have to go home and look it up and research it some more, which in turn meant Sunday was camera shopping day.
Although, I'd love the G11 that Irondad just got, I am just not ready for that much camera or that much expense, so we went with Bob's recommendation of the....

Reading blogs and such, Canon seems to be a favorite, it was priced right and it'll do more than what we need it to do and allow me to play around and learn the manual settings. We drove all over the valley looking for a store that had one in stock, but it was more of an excuse to get out of the house, neglect honey-do projects and go for lunch. We wanted to pick it up sooner than later in order to fiddle with it and learn to use it before my upcoming birthday. Now I know how these motorcycle blogs end up being photography blogs. I think it has something to do with motorcyclists being aware of their surroundings and appreciating the sights and views found when riding.

I am anxious to pick up the Triumph next week, I miss her already and for spring to arrive to get out on the next photo expedition.