Calculus and Spotwalla, not my best subjects...

Ahhhh, what a beautiful Friday morning and a wonderful start to yet another three day weekend. The birds were chirping and singing away, the sun welcoming another day and the temperature hovering at a most pleasant 68ºF.

This is definitely riding weather.... but where to go? Why not check Bobskoot's Spot page, make a few calculations and surprise the weary traveller for lunch?

MotoBlogger "A" leaves Crescent City, California at 7:31 AM, while MotoBlogger "B" leaves Corvallis, Oregon at 8:59 AM. Both MotoBloggers are traveling at the suggested speed limit of 55 mph, what time and where will the two MotoBloggers meet?

I rode out Highway 34 and halfway up the Alsea twisties before coming upon a logging truck, this will not do, so I turned around and rode back down to the bottom to try another run. The great thing about riding solo is one can be easily distracted, unfortunately riding solo one can be easily distracted. You don't know how tempting it was to take a quick detour up Marys Peak. 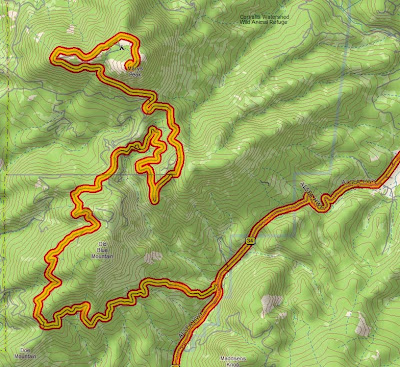 But now I need to make up some lost time, oh how I love the desolate roads of an early weekday morning.

I pulled into Waldport and made a left turn down Highway 101 south toward Florence. Evidently every single tourist piloting a lumbering Brontosaurus was also up and at 'em early this morning.
(No offense Gary).

No matter, I was ahead of schedule and made it to Florence with time to spare. I stopped at a local Bi-Mart store to use the restroom and call Trobairitz for an update on BobSkoot's location.

Bob had stopped for breakfast in Port Orford and is on the move again. A quick calculation puts us about 90 miles apart so I am off to Reedsport where I was instructed to stop and phone Trobairitz for another update. The problem with owning dumb phones is reception is spotty at best and they don't have bluetooth to link to my Sena, so I have to stop to check messages or make calls. This requires removing my helmet and I couldn't be bothered.

I hadn't seen BobSkoot in Reedsport so a darted down to Winchester Bay. Well, wouldn't you know it, I passed who I thought was Bob just north of Winchester Bay so I pulled over, checked a text message and turned around to race back to Reedsport.

Now there aren't too many riders that I haven't been able to catch, evidently I am about to add one more to the list. I checked every gas station in Reedsport thinking Bob may have recognized A BRIGHT ORANGE TRIUMPH TIGER and stopped to wait for me, but no luck.

No way he was that far ahead of me, but I didn't see him so it was a possibility. I took off to Florence to catch him, I felt like I was chasing my tail. I checked every gas station in Florence thinking Bob would need fuel soon, but no sight of him. I called Trobairitz again for an update, "he is south of Florence, go back to the bridge and catch him" and off I went back through town to wait at the bridge. I called again, but Spotwalla hadn't updated yet. This is where I realized Spotwalla has a 20 minute lag and I didn't have Bob's Spot page address to give her, all I could do was wait....

"He turned East onto 126 toward Mapleton, go get him" and I was off again.

I've ridden with Bob before, it's not like him to ride fast but I was just not catching him today. I stopped in Mapleton to call for an update.... no cell service. I had a 50/50 chance that he headed toward Eugene on Hwy 126 or toward Triangle Lake on Hwy 36, personally I had enough motorhomes for the day and I hate 126, so Triangle Lake it was.

Needless to say, 250 miles and a full tank of fuel later, I waited for Bob at home. I never did catch him. However, I learned that it was him I passed in Winchester Bay and he did stop for gas in Reedsport after stopping BEHIND McDonald's to use the restroom. He snuck past me in Florence by skirting up 126 while I was north of town and we passed each other once more in Corvallis as I rode by the Team Oregon headquarters.

Thanks for the spirited ride Bob.