Autumn Equinox and the First Day of Fall 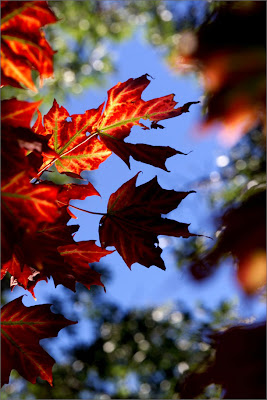 With the Autumnal Equinox occurring in the week and not on a weekend it was looking doubtful I was going to get a ceremonial goodbye to summer ride in. Fortunately Rick called Tuesday evening and ask if I wanted to go do the Kings Valley Loop. This was the opportunity I was looking for so I quickly suited up and off I went to meet him at his place.

We heard that they were closing the gates to the top of Mary's Peak for road construction and decided to run up there instead to see how far we could get before finding a locked gate. We've been wanting to do Mary's Peak since taking the Advance Riding Course and put our skills to the test. Needless to say, it is difficult to see your exit in the dark. We took it slow and easy, Rick flushed the white tail road rabbits from our path and we climbed the twisting grade. The higher we got the cooler it got and the later it got the darker it got. The moon was full and it was a clear night, we could see the fog rolling in high along the banks against the moonlight. We made it past the open gates and continued to climb, past the last gate and nearing the top, the road dipped and we rode through the ghostly fog rolling across the road.

All the gates were open and we were at the top, a clear view to the west, the sun was just setting below the fog bank on the coast. To the east the city lights below were flickering through the trees. Some hikers pulled up shortly behind us in a Nissan Xterra, packed up their backpacks and started their hike up the meadow to yet a higher vantage point. One day I'll bring hiking boots and a lunch in the saddlebags and hike to the top of the meadow, I've never been up there and I can only imagine the 360º view of the valleys below.

Rick and I stood and chatted for a bit but soon it started to get cold and we still needed to climb down the hill. It was a great ride up and fitting to bid the setting summer sun farewell for Wednesday was the first day of fall. We meandered down the hill, again carefully watching for deer. At the bottom of the hill we rode down the Alsea twisties toward town, took one little detour down Decker Road then we turned north again and headed for home. Thanks Rick, it was a great ride.

It was a good summer, we didn't do nearly as much as we did last summer as far as fairs and events go but we did ride over with some friends to the IMBC in Bend and made some new friends. Trobairitz and I rode the Aufderheide National Forest Scenic Byway and the McKenzie Pass together and I took the Team Oregon ART class.


Tuesday night I got home and found an email waiting for me.

I had sent an email Monday mentioning interest to a Craiglist ad and by Tuesday I was corresponding with a gentlemen with a bike for sale. This particular email confirmed that it was still available, I now had his phone number and his address...but it was two and a half hours away and I wouldn't be able to go see it until Saturday.

That is until he wrote "If the bike sells before you come by, I will let you know, either by phone, or email". This is a normal and common sales technique, but it is a very effective one as it sets the buyer up for a wonderful game of "what if". What if it is as nice as he says it is, what if he does have two other interested buyers, what if it sells before Saturday, what if I miss out on a great deal? Then it turned into what if I can sneak out of work early Wednesday, what if I beat the other buyers to it, what if?

Well, I did sneak out of work early, I did beat the other buyers to it and it was a fantastic deal that I could not turn down. 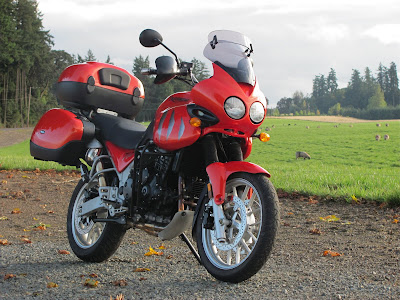 and yup, I rode her home. 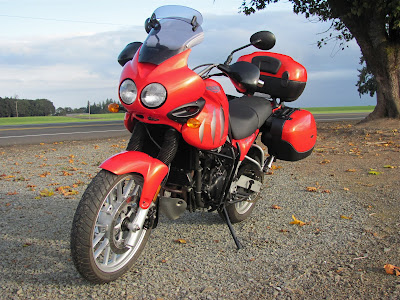 I'll be writing more on the new to me bike, but first I have to finish the work week, this is an expensive addiction.

Talk of a Sunday ride came up at coffee yesterday, the weather has warmed back up after a week of rain, cooler weather and morning fog, kids are back in school so that means less campers on the road which makes for a good excuse for a ride.

Trobairitz and I rode down the street to our old group ride meeting spot, former Creekside Coffee and goofed off while waiting to meet ORTrooper who came in from Lebanon on his Wee Strom. 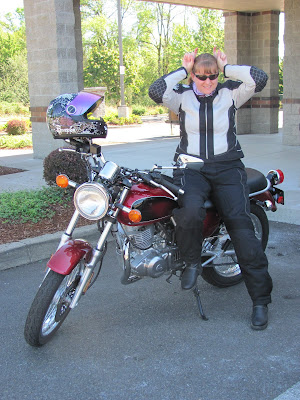 We rode down Bellfountain Rd. South to Alpine and met up with Tim and Rick who were out riding earlier today to put some miles on Tim's new bike. 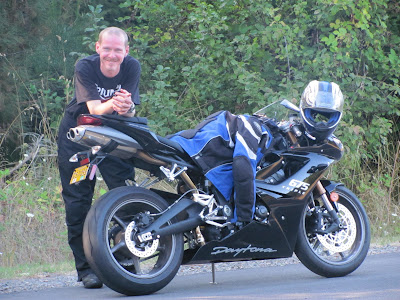 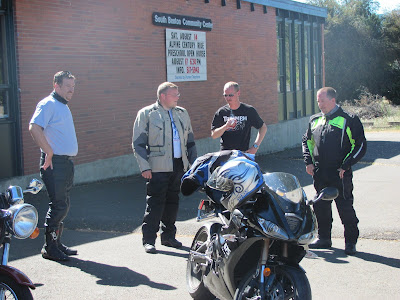 We all oogled over Tim's new Triumph Daytona 675, then I couldn't resist violating her. The green streak of jealousy rears it's ugly head. 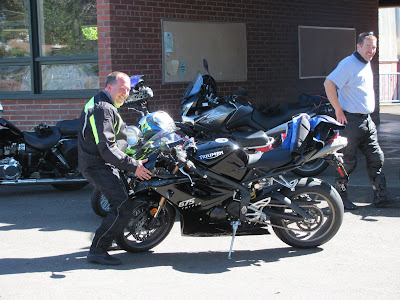 We were mounting up to ride from Alpine to Alsea Falls then onto Alsea when Rick offered, then ordered me to ride his ZZR1200. The man didn't really want to ride a cruiser through the twisties did he? Nah... he wanted to hear his Muzzy exhaust and push me just that much closer to buying a Tiger. I don't know whether to thank him or not.

Off we went, a familiar route on an unfamiliar bike. I followed second in line behind Tim with Rick, ORTrooper and Trobairitz bringing up the rear. So this is what I've been missing? My feet under me, control in the corners and no wallowing suspension or scraping pegs through the turns? Thanks Rick, now I know cruisers really do ride like crap. I ignored that little mischievous voice in my head, never got the bike much over 6000 rpms (Rick wanted to hear the pipes) and I kept it civil. Although 1200cc's is more power than I'll ever need, it was nice to ride a sportbike again. I had a blast and was able to practice ready, aim, fire from my Advance Rider Training. Thanks Rick.

We stopped in Alsea for something cold to drink and Tim found that he had picked up a small nail in his brand new tire. It was holding air so we headed back the way we came so he could get home and repair it. Back on my bike, with our radios on and Trobairitz on my six, I took this opportunity to lead her through the turns and explain outside, inside, entrance, apex, exit and looking through the turns. She coming along nicely. 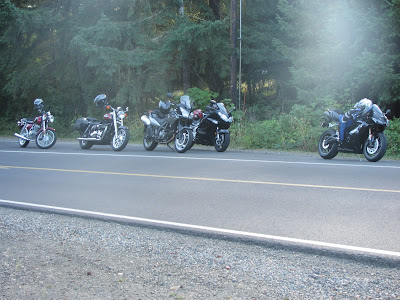 We stopped back in Alpine, well the group stopped in Alpine and waited for us. We chatted, took pictures and enjoyed a few blackberries. 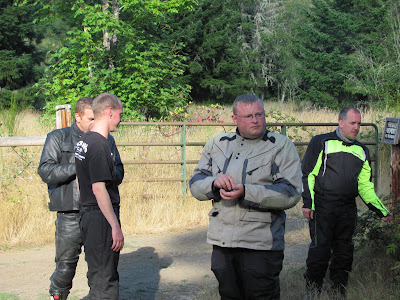 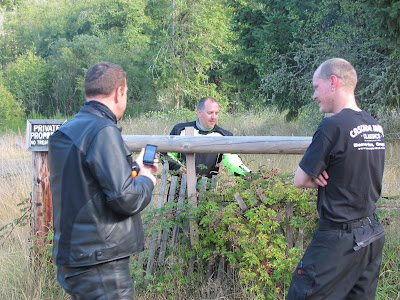 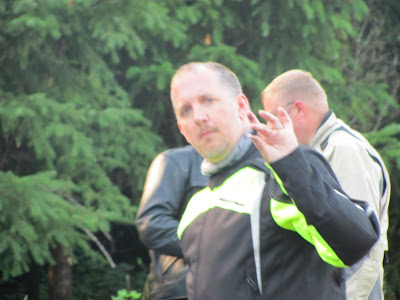 There was talk of Quartzville Road in the next couple of weeks, stay tuned for a Autumn Solstice Ride.

Troubadour on a Ténéré

Okay, Triumph has pissed me off, they can take their new Adventurer and sod off.

I've been waiting for the new video of the Triumph Adventure and hoping for some better photos of the bike, but alas I face another disappointing video. Flashes of the bike with no real information other than a low voice Brit spouting off about the suspension and blah, blah, blah.

Show me the damn bike already!

Thanks to Tbolt for the Hell for Leather link to more photos. 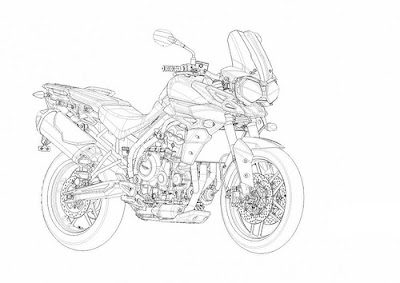 But wait! What's this? While I sit and wait for Triumph to show us their bike Yamaha is over here showing us and taking deposits with a Spring 2011 delivery date of the Super Ténéré. 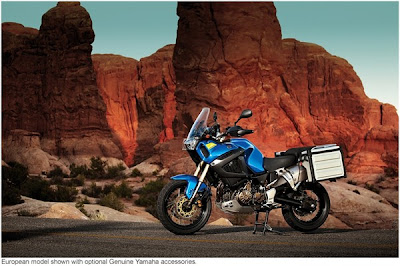 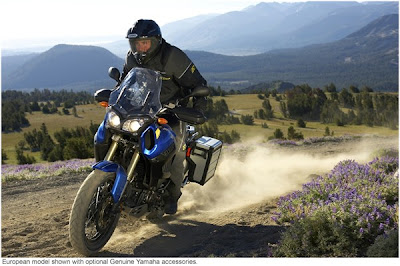 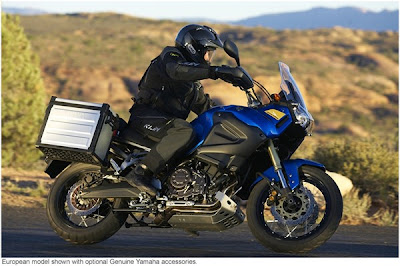 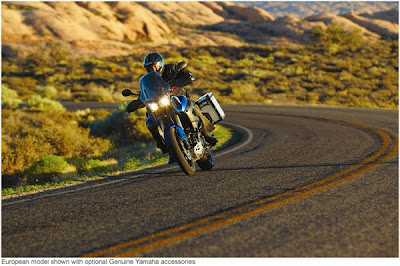 Wake up BMW, Yamaha is knocking at your door. Oh and don't worry about Triumph, they haven't even started up the walk yet.

The only things stopping me from sticking it to Triumph and buying the Ténéré is I so love that Triumph Triple motor and the Ténéré is just too much bike for what I need and too much money than what I have.

So it's back to Craigslist and CycleTrader, there's going to be plenty of used Tigers available for dirt cheap once the Ténéré and the Adventure hit our shores. 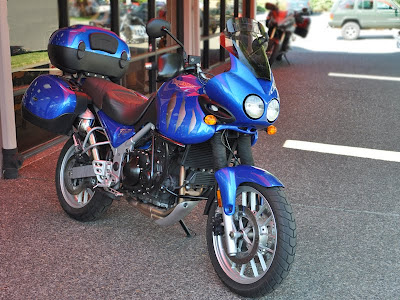 Triumph owners can't be that loyal. Can they?