I received an email from a friend the other day, a friend to whom I had sold my '76 KZ900LTD. 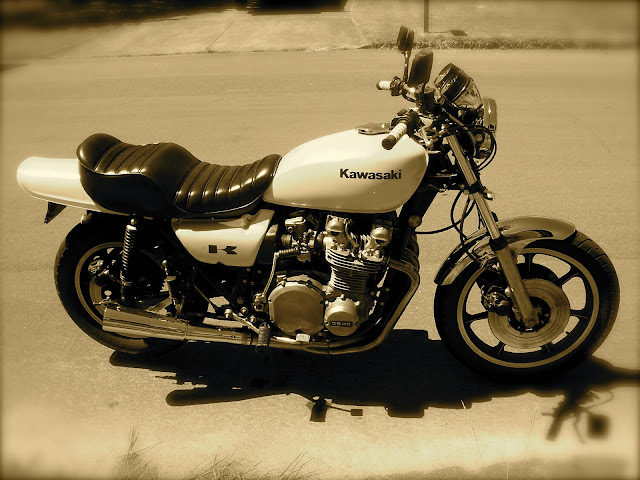 I have a history with this bike. When we moved from Canada, found work, settled in and getting established my new boss sold me a KZ900LTD he had just bought from a mechanic. He is a big fan of KZ900s with several in his shop including one he bought new and was quite knowledgeable with these bikes. I learned quite a bit too. We would take off after work and ride our bikes to the coast, we would go for chowder rides on the weekends and I commuted daily on it. I loved that bike and can't remember how many miles I logged on it, I repainted it (somewhat poorly) and even taught Trobairitz how to ride on it.

Several years ago, the old KZ started making ticking noises, the starter wouldn't engage and I much preferred the more reliable Triumph Sprint ST I had recently purchased, so I had parked the bike in the backyard and covered it. I had full intentions of restoring it but eventually admitted that I would never get around to it and at a weak moment let it go to a friend who was willing to get it running and ride it. Well, he did get the motor out and apart, replacing the valves and valve spring retainers but then life got in the way. He graduated college, went in search of work, got married, moved and just didn't have the time, money or resources to finish it. So he asked if I wanted to buy it back.

Needless to say, weak moment number two... I now have a project bike. 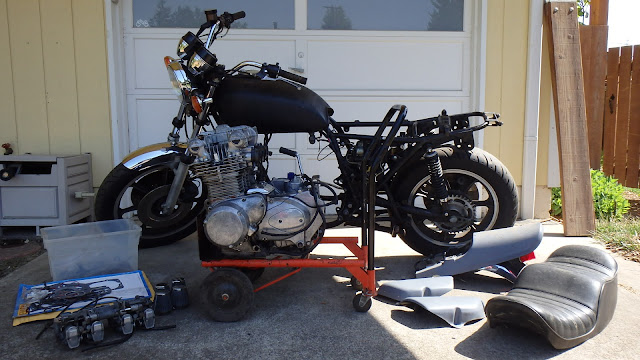 Some of it is in my single garage and space is tight, the rolling frame is again in the backyard under cover.  I still don't have the time and just enough knowledge to mess it up, but my intention is to sand down the tank, sidecovers and tail piece then try my hand again at painting. I'll mount some new tires, bleed the brakes, polish the bits of chrome and spot paint the frame. I need to get in touch with another friend who is a detailer to fine tune and shine up the engine.

I know she'll never be a show bike, but I certainly hope at the very least I won't have to part her out on flea bay. Maybe, just maybe, eventually we can make appearances at bike nights and coffee.


My old father used to have a saying:  If you make a bad bargain, hug it all the tighter.  ~Abraham Lincoln