Oh, to be the best

Even Ducati wants a Tiger, Italians never were.... subtle. 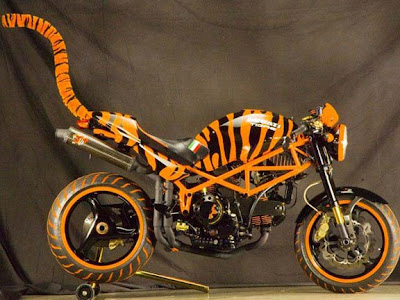 Then there is Scion's attempt 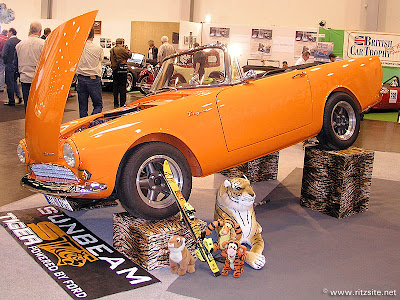 I finally have my Tiger running now, I replaced the stepper motor that controlled the Idle Air Control Valve. The electrical gremlins have been rousted out of hiding and sent packing. 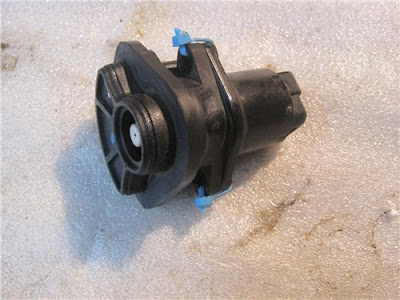 (stepper motor)
Unfortunately, the gremlins moved out of the garage and made it as far as the driveway where the car was parked and claimed the Body Control Module as home sweet home.

The car left Trobairitz stranded Friday morning. I highly recommend becoming a member of AMA with automatic renewal as it includes their towing service which saved me an expensive tow charge to the dealership.

The Tiger is now our main mode of transportation for a week while our one and only car is in the shop. I guess the saddlebags will go back on the bike so we can fetch some groceries. We'll either no longer take the car for granted or simply learn to live without it.
Posted by Troubadour at 8:27 PM 7 comments:

My stepper motor did not come in last week as I had hoped. I was planning to pick it up last Saturday and install it Sunday but of course it arrived Tuesday instead. I won't be able to make it to the shop until this weekend. This delays my repair a week and has me manipulating the throttle to compensate for the poor idle. The bike runs fine at speed but the faulty stepper motor won't regulate the air intake at idle and cause it to stubble and stall. I'll replace it this weekend and hope it fixes the problem.

In the meantime, I've been ordering farkles online and today I received new footpegs from K&L Cycle. 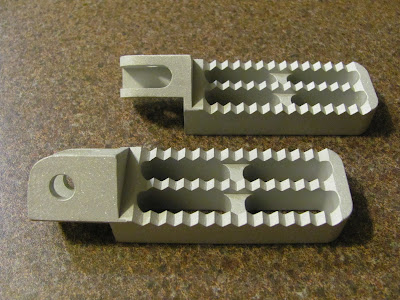 A much more aggressive cleat to secure my feet while standing on the pegs as I explore beyond the pavement. These drop the pegs about an inch thus lowering my weight on the bike. 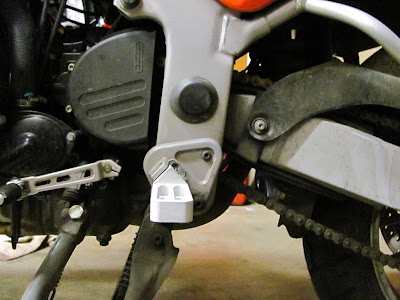 I mounted them right away and adjusted the shift lever, the brake lever seems good but I may adjust it after a ride or two. They look odd, not because they don't have rubber inserts but because they are so clean. 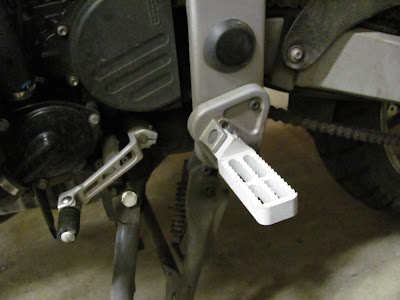 I really need to wash my bike sometime. 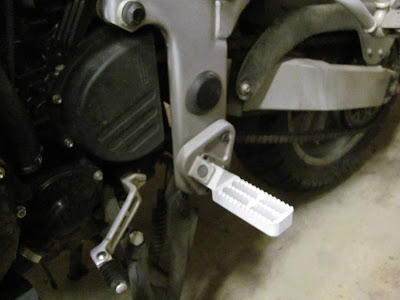 Maybe this summer, when the rain stops.

Off to see the Wizard

I have been busy lately with work and home. This is our busy season at work and though the rest of the country is buried under six feet of snow we are being pushed to ship grass seed. This is thanks to computers and the loss of human interaction. Buyers aren't looking out the window and basing their decisions on what the weather is doing right now or expected to be in the next few weeks but rather gazing into a computer monitor and reading what sales were last year. I know it takes time for product to ship, the transit time for an order to reach the distribution centers, then be consolidated with other orders and shipped again to individual stores. It can take two to three weeks for a store in Pennsylvania to receive an order from Oregon but it also can take weeks for snow to melt.

I laugh cause everything we do is so reliant on computers, even our bikes. Several weeks ago we had a lot of rain, it was blowing sideways wet. During that time my bike developed an ailment and has not been running at her best, experiencing hesitation, rough idle and stalling. I've had the tank, battery box, air box, filter and spark plugs out twice, replacing the spark plugs the second time and draining the fuel tank suspecting water in the fuel. It is nearly an hour job to dismantle the Tiger to get to the plugs and another hour to reassemble just to find it still runs rough. I've spent hours online reading forums learning about ECUs, IACVs, EFI, O2 sensors and all the little electrical gremlins residing in modern bikes. I've done all I can to fix the problem so now it's off to see the Wizard today to have him remap the ECU. (And maybe test ride a Street Triple).

Computers, do they really make life that much easier? When they are doing what they are supposed to do then yes, otherwise it takes another computer to fix the computer that you need. Great, now computers are a need.


-ADDENDUM: I had a great ride down to the Triumph shop and a better ride back, now that I know what the problem is. Apparently the gremlin I've been chasing is a faulty stepper motor for the Idle Air Control Valve, a $113 part. So with the part on order and an hour shop labor to disassemble, diagnose and reassemble and two new O-rings for the fuel fittings I am down $191.50. I have to tolerate the rough idle for another week until the part comes in, install it myself to save me an hour labor charge, then next time I'm at the shop they'll wipe the codes for me.

Ahhhhh, computers.
Posted by Troubadour at 8:01 AM 5 comments: