This year went much smoother than last year. Trains ran on time and stayed on the tracks, allowing us to run up I-5 and I-84 to Hood River and the fairgrounds in Odell where we'd spend the weekend. Polar Bear looped around the fairgrounds looking for a suitable spot to call camp. We drove up past the restrooms, past the bandstand and found the perfect, shady spot in the corner with power for our buddy DJ and his Class C motorhome and trailer. It was away from both busy roads and all the hustle and bustle of the other attendees.

We unloaded our gear, got our tents set up, then sat and enjoyed a cold beer under the shade of a birch tree while waiting for DJ. It was sure nice to be up there early, claim a spot and relax while everyone else rolled in. About an hour later DJ and his friend Thad rolled in, backed up and leveled the rig in true glamping fashion.

Dinner plans were discussed and the gang went down to the meeting hall for $2 tacos from a local vendor who set up on site. I wasn't up for a token lettuce taco so I stayed and puttered with my jet-boil and prepared a delicious meal of rice and lentils in curry sauce. Just add hot water and stir.

The guys got back with the news that the night ride was easy gravels roads "C course" so we decided to all go. DJ and Thad brought their dual sport bikes for Saturday's more challenging "A course", and their bigger adventure bikes for Sunday's "B-C course"; and now Friday night's ride. Andy and I unloaded our bikes all the while trying to figure out how to fasten lights to our helmets to read the roll chart.


We wandered down to the hall to pick up the roll chart for the ride and any other information we needed, such as departure time and approximate mileage. Back at camp we loaded our roll charts, taped flashlights and head lamps to our helmets, and waited for dusk before gearing up and heading out.


Not being familiar with the area makes the riding fun and full of discovery. The road unfurls before us, revealing beautiful scenery as the sun slowly sets behind a mountain. Again, not being familiar with the area makes the riding in the dark... fun... and full of discovery. Especially for the one of us whose "street legal dirt bike" has less than adequate lighting. Polar Bear, short of stopping to light his gas lit carriage lamp of a headlight couldn't see into the night let alone cut through the dust which hung low like an early morning fog. Me being behind him didn't help, so I passed him to give him a taillight to follow. We had our Senas on so we could at least communicate with each other and it wasn't long before I felt like his seeing eye dog, leading him through "most" of the sharp turns. I commented that his red and white Husqvarna was like a blind man's walking stick, which I don't think he appreciated, but isn't that what are friends are for?

The pace slowed considerably, but we made it back safe and sound. It was late, we had an early day Saturday, so we called it a night and made our way into our respective beds.

The neighborhood rooster woke me up at 4:00 Saturday morning, which is about the time I get up for work anyway. So I quietly gathered up my jet-boil and breakfast fixings to peacefully enjoy the sunrise with a hot cuppa tea. I knew that once everyone woke up, the race would be on and the pace set for the day.


Tick tock, pick up roll charts at 6:00, rider's meeting at 7:00, there's the horn, let's go!
The organizers have us raise our right hand at the meeting and recite "this is not a race".

Andy and I prefer the "B course", also Andy likes to start off slow then taper off from there. DJ and Thad on the other hand were chomping at the bit and were gone on the "A course".

The two of us eased into our gear, rode our bikes down to obstacle course, spanked the monkey, then headed out. Much easier in the daylight.

Saturday's ride was a leisurely tour, much less KTM rhinoceros traffic than last year's shared course. The "A course" and "B course" were split up this year, on opposite sides of the river, in separate States in fact. We rode across the scary bridge into Washington while the "A course" stayed in Oregon.

B-C-Courses-BD-2017 from Thom Niemela on Vimeo.


We took our time and ambled along as we had all day. Took a few pictures and stopped for snacks, pee breaks, and more often than not, to stretch our butt muscles. 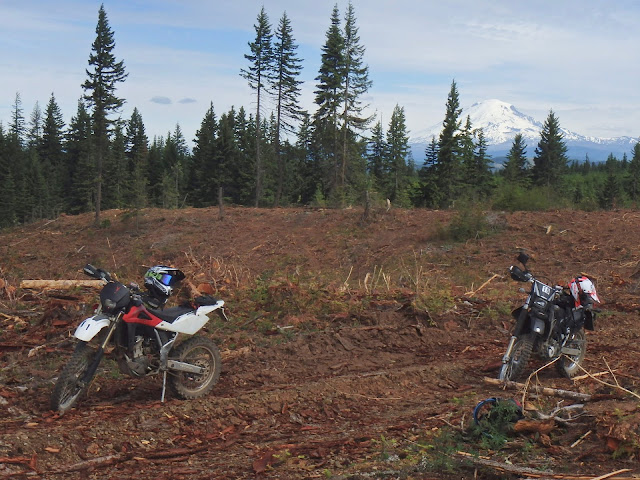 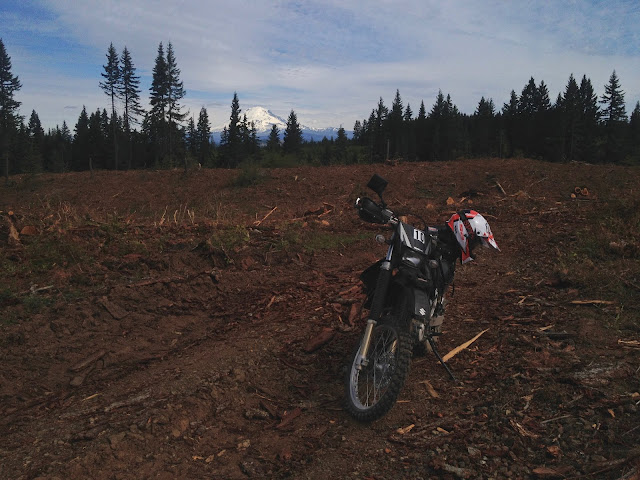 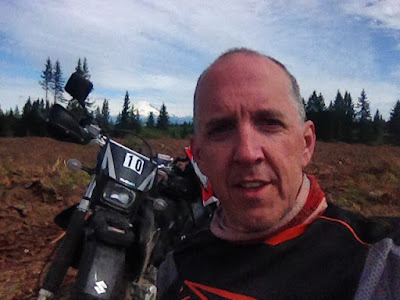 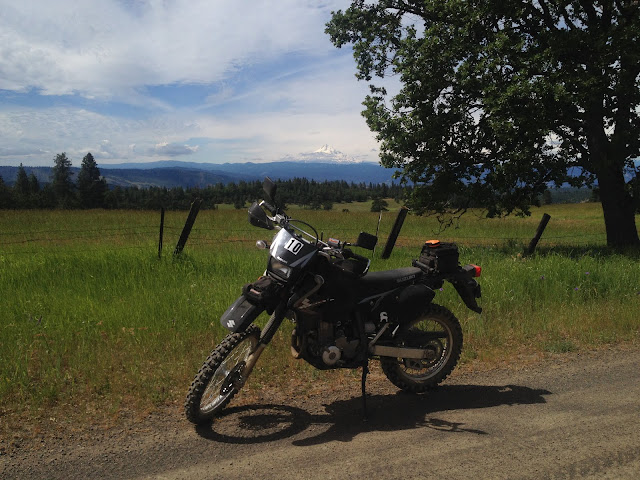 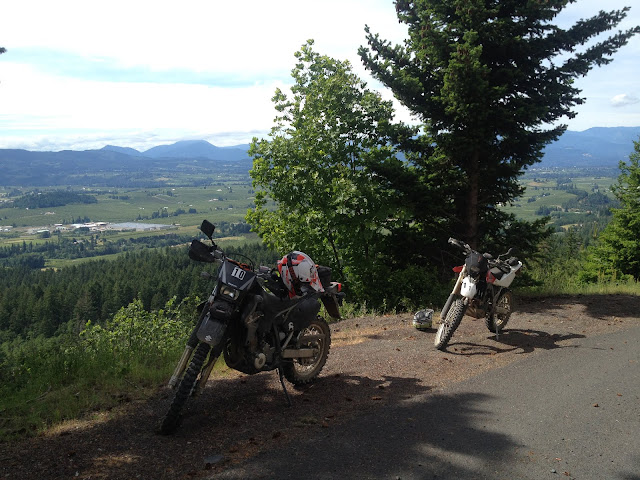 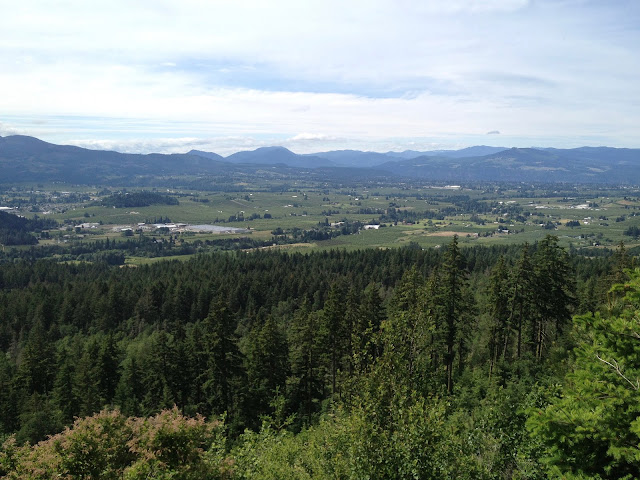 With so much rain this year, neither one of us had been out riding motorcycles or mountain bikes, let alone any training for longer rides. I'm in pretty good shape for a guy not in very good shape.

Pulling back in the fairgrounds for the day, we were met with a little riding challenge for points. We had to ride up to a mailbox on our left side, reach in and grab a poker chip without dabbing (putting a foot down). This is much harder than it sounds as the left side doesn't allow you to use your clutch, thus causing my bike to stall and me to dab. Andy had better luck by staying on the throttle a bit and dragging the rear brake. Must be a trials riding technique. My neighbors are going to wonder what the hell I'm doing practicing at home riding up to my mailbox trying to grab a poker chip.

We were whooped, so we headed back to camp for a cold beer and converse about our day. It wasn't long before bed as we had to be up early again for Sunday's ride.

Cock-a-doodle-doo went the alarm at 4:00, and again I enjoyed the peaceful sunrise over a cuppa while packing up my sleeping bag and camping gear.
Grab the roll charts, load our holders, gear up, spank the monkey, and we're off. All the rider's shared Sunday's ride so we were wary of the KTM rhinoceroses. And sure enough they didn't disappoint.

We had to be back by 2:00 so the pace was a lot quicker, with fewer stops and much fewer photos.

The route and roads were awesome, we crossed the scary bridge and made our way up to Gifford Pinchot National Forest for a quick loop through the woods and past the Ice Caves, too cold to stop. Then it was back down to Trout Lake and up the other side toward Conboy Lake National Wildlife Refuge, wish we had time to visit. Sunday's route was fantastic, but the pace was way too fast. It does give me an excuse to go back with Trobairitz and enjoy it at our leisure. 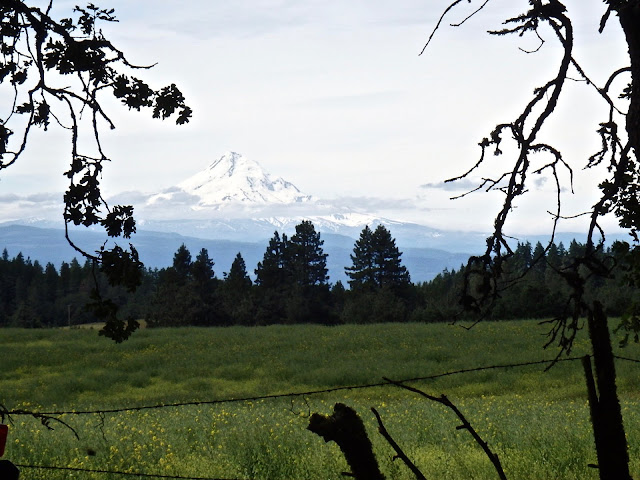 We did find time to stop and assist a KTM rider with a broken hub, more console him than assist as there was nothing we could really do. He called the event organizer to have a truck come pick him up. And we talked to a 70 year old gentleman that rode the entire B course, both days on his Harley Davidson 1200 Sportster. He said it was lighter than his BMW R1200GS and he could touch the ground. 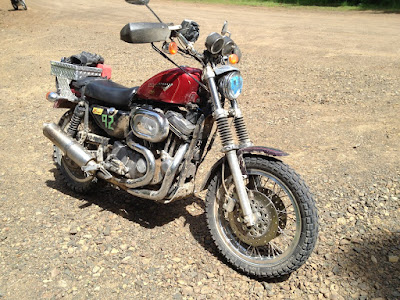 Back at the fairgrounds we enjoyed another  challenge for more points, touching the top of 4 traffic cones lined up in a row without dabbing. Again, much harder than it looks, I nearly lost control of my bike and fell. I tapped two out of four, and something else I'm going to have to practice.

We rode back to camp, loaded up just in time to attend the awards ceremony. I didn't earn enough points to warrant a prize, but I wasn't there for the points, all I wanted was to ride.

It was an uneventful drive home, it was great just to sit and relax.

"Thanks for driving Andy!"