After coffee last week, Andy and I were wanting to go for a ride. Without a plan or a route in mind, we couldn't decide which way to go. Fortunately, Andy is a walking GPS and off the top of his head linked together several short stints of backroads to make for a great afternoon of riding. I was quite happy to follow along, singing a song, and not having to plan a route. It's not that I don't have any sense of direction, I just don't know which way to go and can easily end up riding around in circles.

We stopped at Salmon Falls Park and walked down to the falls. I'd never been out there before, and it had been several years since Andy had been camping up the creek nearby. 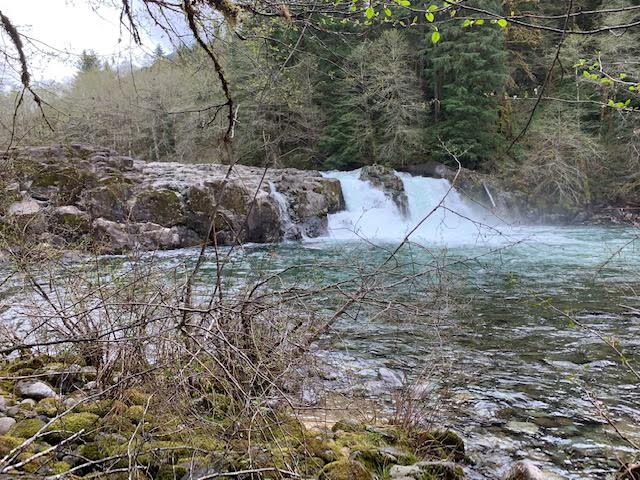 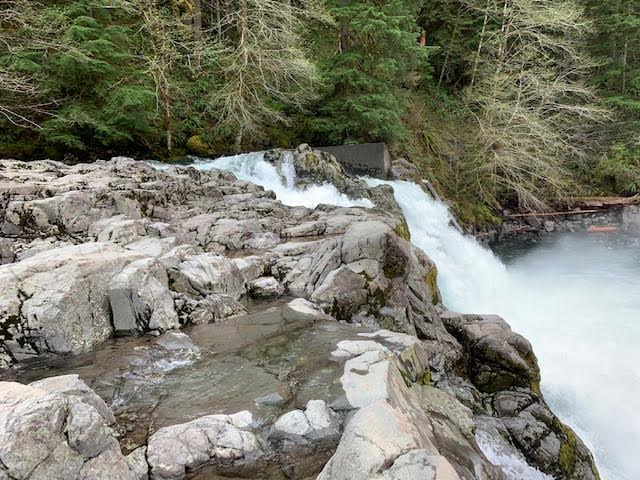 Plenty of nice swimming holes to jump into, and pools to relax, I'm sure it's crowded in the summer


We rode a little further up to where the pavement ends, but with the grey skies and recent rain the road was a wee bit muddy and we weren't up for picking up our bikes. So we turned around, headed into town and ended up at a motorcycle dealership to peruse their wares. I was hoping to catch a glimpse of the highly acclaimed KTM 790 Adventure R... no luck. They did have a few KTM 790 Dukes that tempted Geoff James into tomfoolery and shenanigans.

We hummed and hawed, sat on a few bikes and made vroom vroom noises...

And not to say I don't have my own temptress, and seriously considered this pavement princess.

It was a great afternoon and a great ride, but something had been bothering me for a while. Because I didn't have to plan this route, I was able to follow along mindlessly and it gave me all afternoon to ponder other things.


All this temptation was too much to handle,

Well, you do what any foolish minded motorcyclist would do.

Simply compound the problem by adding yet another bike to the fleet. 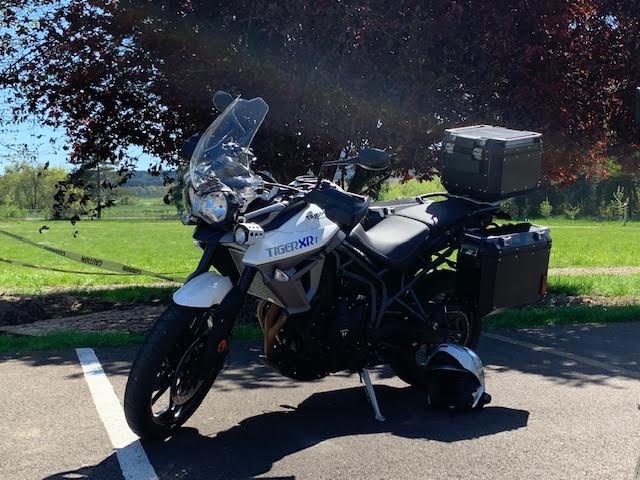 For some reason this tree at Muddy Creek Charter School has been the go to place for new bike pics. I don't know why, as it's not particularly pretty, and we're always fighting trash cans and caution tape in the background. But tradition is tradition, so we rode all the way down south of Corvallis to continue said tradition. 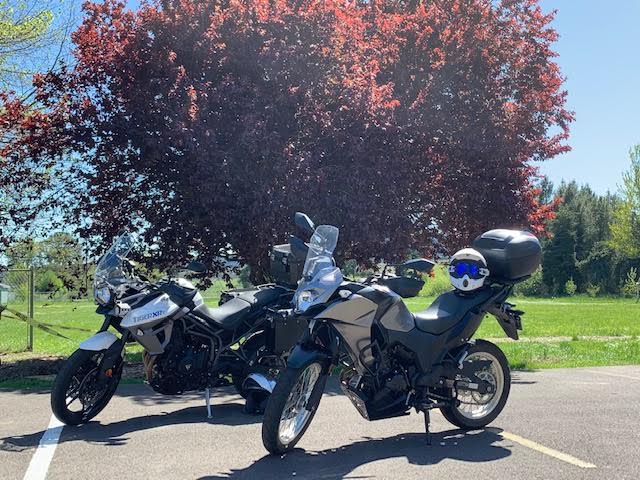 So Lucy is currently sitting in the garage. I'll take her into work one day, then list her for sale for someone else to love.

We had some great times together, thanks for the memories,

~ It's hard to forget someone who gave you so much to remember.

One of the many great things about working with Team Oregon is talking with former students, they love to tell us their stories and experiences of their classes and instructors. I was visiting with a vendor one day, who happened to be a former student, and he mentioned something his instructor said to him that stayed with him for years,  although he couldn’t remember his instructor’s name, he recited “Never ride like you’re late for work”.

We tend to get in a hurry, whether late for work, late for an appointment, fetching groceries, shuttling kids to their game, or simply trying to make up some time. Regardless, that’s when we make mistakes, and as we teach in class, a mistake in a car may result in a minor fender bender, a mistake on a motorcycle can be fatal.

Driving isn't what it used to be, long gone are the days of going for a Sunday drive, and stopping alongside the road for a picnic lunch. Driving just for the enjoyment of driving.

Motorcyclists still get it, but even then many of them are in the same hurry, hurry, rush, rush mindset as car drivers. Destination over journey.

Brandy likes to leave for work early, I’ve always contributed this to her OCD (or as she calls it “CDO” because it has to be in alphabetical order), so I’ve also adopted this schedule and learned that I beat the “rush hour” traffic. This allows me to ease into my day, appreciate the sunrise, and the quiet stillness of the morning. I take my time and admire the scenery. My commute is much more pleasant now that we've moved and changed jobs.

And, I can stop to take photos like these ones I took this morning. 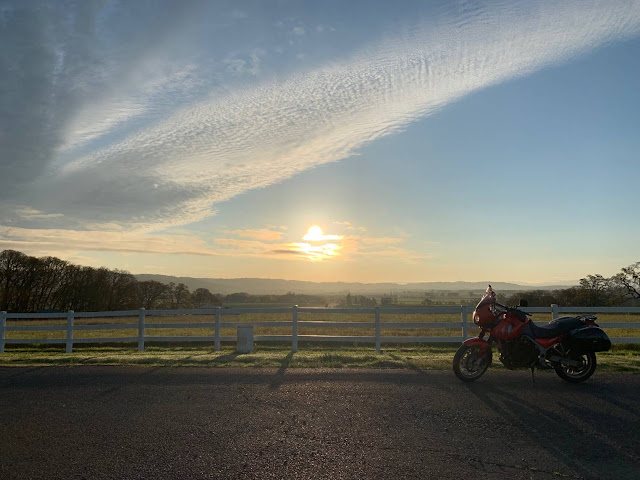 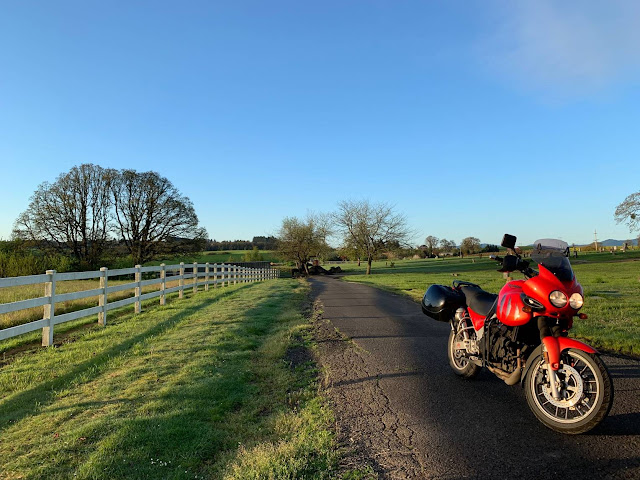 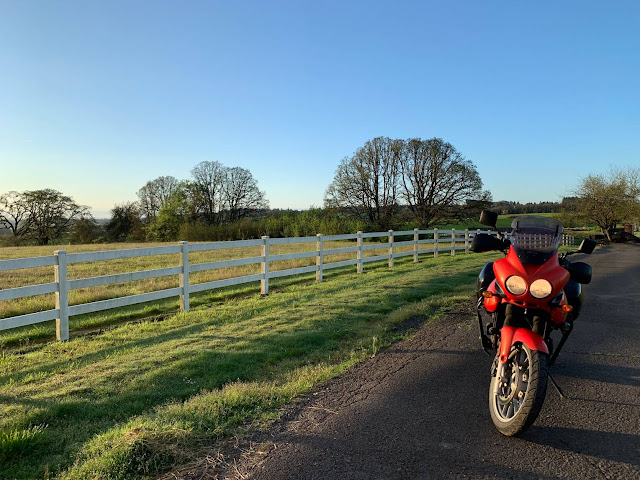 So I thought this would make for a great challenge to other riders, and commuters alike to leave a little earlier, take your time during your commute, pull off on that side road for a moment, and take a picture. Whether you work day shift, night shift, split shift, or maybe you’re retired and you’re out picking up the morning paper.

It can be of your bike, your car, your bicycle, or simply of you stopping to smell the roses…

Slow down, and appreciate the small wonders along your commute.

~ I regret less the road not taken than my all-fired hurry along the road I took. ~