I know I haven't been posting a lot lately, we shut off our TV and have been busy doing other things instead like fixing bearings, bleeding brakes and soon to be changing tires. We've been riding our motorcycles, enjoying summer and traipsing to San Francisco, you know... life.

The most important thing we did was shutting off the TV. After my surgery it was too easy at the end of the day to shut off our brains and zone out in front of the tube until it got dark and then drag ourselves to bed. It's amazing how busy you can be when you take the time to do something, anything.

Then there is the computer and social websites, I was connecting and neglecting, they don't call it "wastebook" for nothing. Forums, Netflix, Facebook, Google+, Craigslist, ebay, when does it end? It ends now. I've neglected the house, the yard, the blog and I've wasted too much time watching videos, reading status updates and commenting on other peoples lives. When I need to be reading the stack of magazines I have on the coffee table, the books sitting on the bookshelf, the blogs you all put so much time and effort into for yourselves but share with us as well.

We shut off the TV, cancelled Netflix, locked down facebook and stopped logging into the forums every hour on the hour. Netflix made it easy with the whole Netflix and Quikster fiasco, they want to change our accounts and separate DVDs and streaming. I was mad at first but realized my energy could be focused elsewhere and closed our account.

Then facebook completely revamped their whole webpage and changed the way they share your information. You think Big Brother was scary, there's a new thug in town. 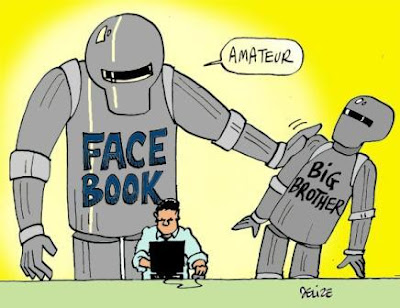 Google+ is the new social network, I gave that a try until I was banging my head on the desk. Plus one this! 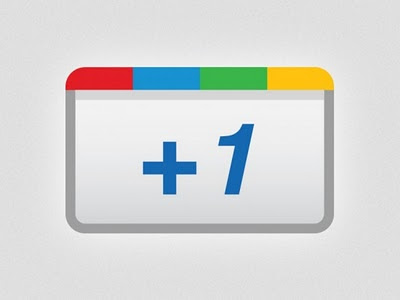 Connecting with friends at Saturday morning coffee every week, bike night once a month and checking the forum once every other day or two should suffice. There is always email and although I despise the cell phone I suppose I could open Skype once in a while.

Anyway, amongst all the online social interaction, we have gone on a few rides. Some on our own, some group rides and a couple of more intimate rides with another couple, Josh and Meg. Trobairitz wrote a bit on our rides so I won't reiterate, but she did leave out the best part at the peacock park.

We met some kids that invited us to go sledding. ATGATT!!! 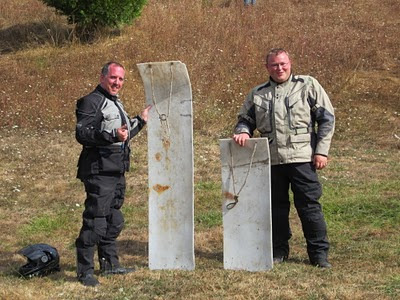 This is a completely new concept to this Canuck as I never heard of sledding down grass slopes in the middle of summer. 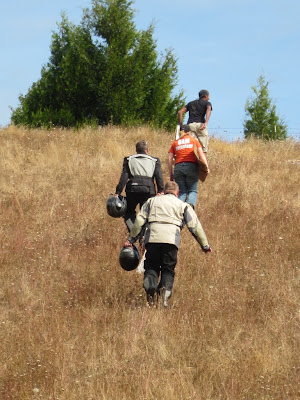 Simply find some cardboard or nylon sheeting, climb a hill and go.

I haven't ROTFLMAO like that in a long time. 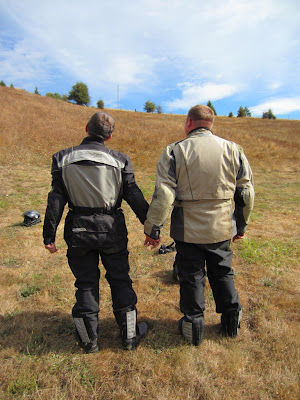 
Trobairitz has been posting our adventures in San Francisco but hasn't got to Sunday yet when we went to Alameda. She wanted to go see the USS Hornet, a World War II aircraft carrier. I won't spoil her tale but I encountered something much more fun than a big old ship.

We boarded the BART system to Oakland and hopped a bus to Alameda. The bus dropped us off just outside the Naval Air Station so we walked a few blocks. We didn't see the MythBusters but could see the Hornet in the distance.
When we came around the corner I had to stop to take a photo, what wonderful fun is this? 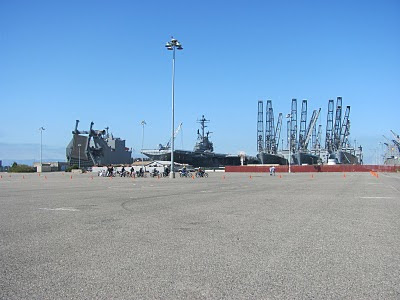 What a great photo op, of course you know of whom I thought. 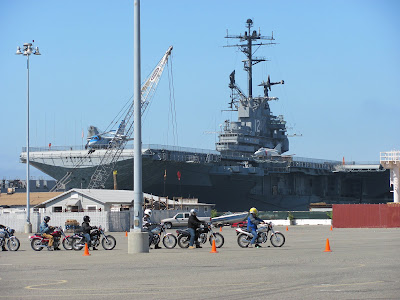 But then we got closer and spotted... *rubbing my eyes*... could it be? 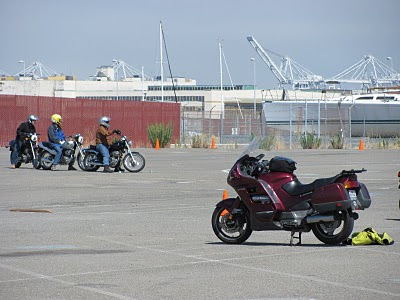 Sophie with a Hi-vis jacket on the ground beside her? 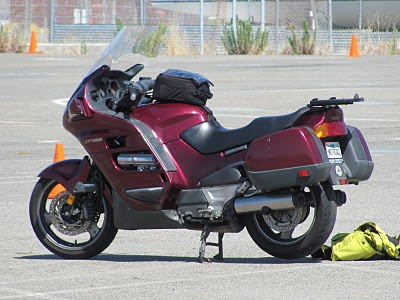 Irondad!!! We found your doppelganger!!!! Or did we slip back in time? A younger, dapper Dan? 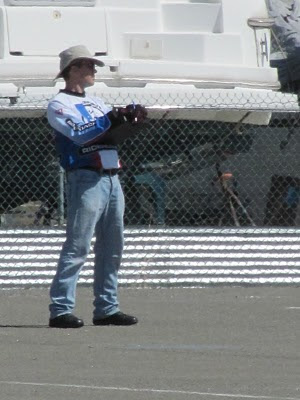 To train and to learn under the watchful eyes of an aircraft carrier would be pretty cool. I could've stood there all day watching bikes go round and round. 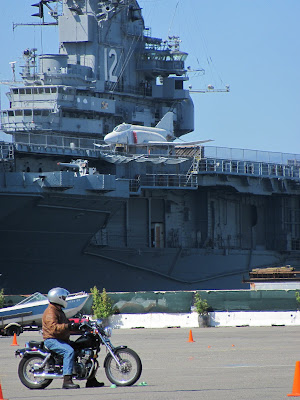 Even from the control tower... 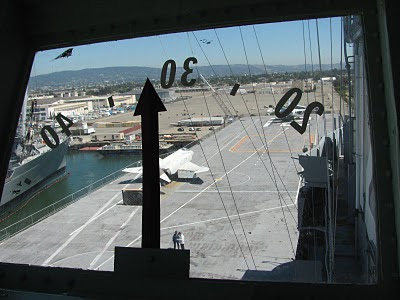 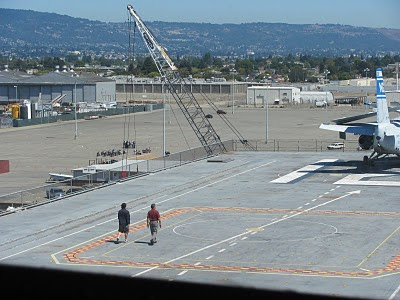 and the flight deck, I did. 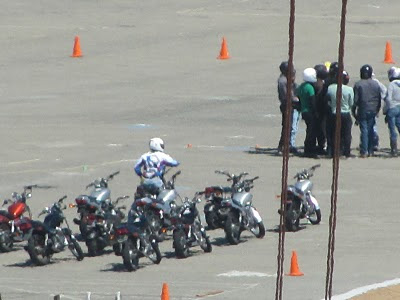 Seeing these bikes on the course gave me something to think about, now I have all this spare time.


"A tribute to learning is teaching." -Wise Saying from the Orient
Posted by Troubadour at 7:01 PM 7 comments:

Why I shouldn't work on my own bike...

While dealing with my bearing fiasco, I noticed that my rear brake pads were due for replacement and promptly ordered new pads all the way around. The front pads were fine but I knew I'd better have a set in my tool chest for when the time came to change them out. While picking up the pads from the shop, the ever helpful young man at the counter asked when the last time I changed the brake fluid in the bike. Way to up-sell. Well I said, I haven't had the bike a year yet and the previous owner was a retired shop class teacher and we know how meticulous they can be, so I would say about a year. I checked the sight glass in the front master cylinder/reservoir and sure enough it could definitely use a change.

I bought some Speed Bleeders over a wet dream I had thinking I'd attempt bleeding my own brakes. I've bled brakes before and it is so much easier with two people but I am more work at my own pace, enjoy the peace and quiet, mutter to myself, kinda guy. Speed Bleeders would make the job so much easier and maybe, just maybe I wouldn't be so reluctant to change my brake fluid next time. 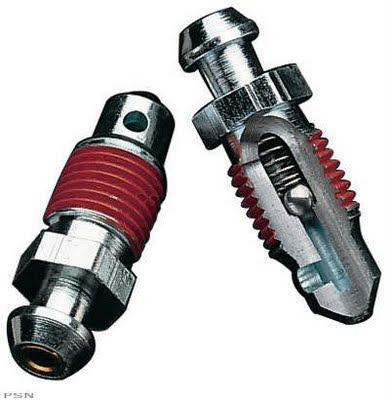 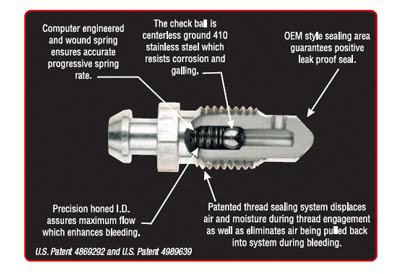 After a week of going round and round looking for the absolute best, high performance, race quality, motorcycle specific DOT4 brake fluid that money could buy, I settled on Galfer Brand and I was all set. 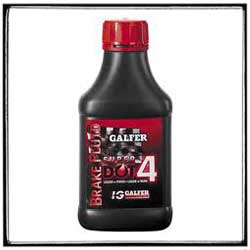 I started with the front bleeders and had the old ones out and the new ones installed in no time at all. I was standing proud in my garage that I hadn't stripped out the aluminum threads on the brake calipers. However, in my eagerness I realized that now I was committed. The delicate integrity of brake fluid has been tainted, the seal broken and there is air in the system, there is no pressure behind the lever and the bike is officially out of commission. I gazed upon the two little innocent looking Phillips bolt heads holding down the cover of the reservoir.

Being from Canada I was born and raised on Robertson drivers, such a wonderful invention, I applaud you Mr. Robertson. 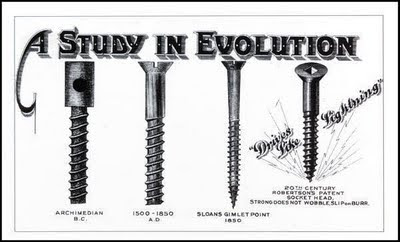 And I have learned to appreciate many other socket type heads throughout the years. 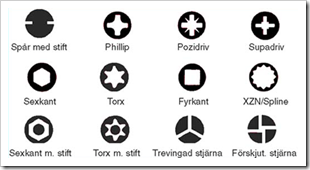 I have a set of hex keys and even a few torx driver bits in my arsenal. All wonderful to use but seeing a Phillips type head will bring this grown man to tears. Why, oh why does this style still exist? Most useless fads come and go, giving way for new and innovative replacements. Take music media for example, just in my lifetime I've seen vinyl records, reel to reel and 8 track tapes make way for cassette tapes and compact discs. Now they're obsolete with MP3 and digital media taking over to the point that I don't even know what to call it. (Where's my cane?) So why do we hold on to such a poor design as the Phillips head? Why?

So anyway, you see where this is going, right? Yes, these two little thorns would be no different and knowing that an aluminum reservoir and steel bolts create a wonderful galvanic reaction, I took my time and approached the task slowly, delicately and with utmost precision. Needless to say, I stripped out the head and reached for my drill. I drilled out the first bolt head hoping to leave enough material to grab with a pair of vise-grips once I got the cover off... well, it worked in theory.I went after the other side and drilled a small hole being careful not to lose the head of the bolt this time. I inserted a screw extractor, with a few taps of the hammer I managed to get a good purchase on the screw and slowly turned counterclockwise until... the extractor snapped. Shit! Shit! Shit! and much, much more expletives.

Deep breath and muttering to myself. I used a center punch and hammer, slowly tapping the screw from its grip. That's one out, the cover is off and I emptied the reservoir and stuffed a paper towel to catch any shavings, now back to the other side. Using a smaller bit I drilled out the broken bolt just a wee bit more and the next day I bought another extractor. You would think I'd be smart and buy a better quality extractor than the one I just broke right? The new extractor filled the well I had just drilled and the drill bit is no match for the remnants of the new extractor.

I went ahead and flushed the system, bled the brakes and replaced the cover with the one bolt while I ponder going after the other with a rotary tool and left hand drill bit, purchasing a better quality extractor or replacing the whole reservoir and master cylinder. As long as I get to it before the rain comes.

And I did replace the one bolt with a stainless steel hex head.

I did ride to work today, what a difference new fluid makes. The Speed Bleeders made it simple to flush and bleed the system. I recommend them.
Posted by Troubadour at 12:30 PM 7 comments: