"Please accept, with no obligation, implied or implicit, our best wishes for an environmentally conscious, socially responsible, low stress, non-addictive celebration of the winter solstice holiday, practiced within the most enjoyable traditions of the religious persuasion of your choice, with respect for the religious/secular persuasions and/or traditions of others, or their choice not to practice religious or secular traditions at all.
May you also experience a fiscally successful, personally fulfilling, and medically uncomplicated recognition of the onset of the generally accepted calendar year 2015, but  with due respect for the calendars of choice of other cultures whose contributions to society have helped make America great (not to imply that America is necessarily greater than any other country, or is indeed the only “America” in the Western Hemisphere), and without regard to the race, creed, color, age, physical ability, religious faith, or choice of computer platform of the wishee.
(By accepting this greeting, you are accepting these terms: This greeting is void where prohibited by law, and is revocable at the sole discretion of the wisher. This wish is warranted to perform as expected within the usual application of good tidings for a period of one year, or until the issuance of a subsequent holiday greeting, whichever comes first, and warranty is limited to replacement of this wish or issuance of a new wish at the sole discretion of the wisher.)"
~ Author unknown
Posted by Troubadour at 7:38 PM 11 comments:

Back in the Saddle Again


Last summer, I had the rare opportunity to help out new instructors and play error rider for their range training session. This also gave me another rare opportunity, a brief discussion with my mentor. We talked about our lackadaisical riding as of late and how he had nothing to prove to himself or to others.

I thought about this for the rest of the summer. I've ridden year round in both temperature extremes, commuting back and forth to work for the past several years and although I am not nearly as proficient a rider as Dan, my skills have improved immensely since becoming an instructor. I will continue to hone my skills and challenge myself, but I recognized that I too have nothing to prove to myself or to others for that matter.

The reason I mention this is that I was using my commute to prove myself, a 22 mile stretch of four lane highway that I absolutely detest. A half hour ride every morning at dark o'clock tends to cause one's mind to wander, to the point that I began asking myself "why the frack am I out here?!?" It is too cold, too wet, too dark, too dangerous and no fun at all to say the least. I was just as miserable commuting home in the late afternoon fighting traffic. Then when weekend came around, I had no desire whatsoever to share the road again with the same cagers that were out to kill me all week.

Motorcycle riding had become a mundane chore and I nearly lost interest in everything motorcycle related. I receive several monthly motorcycle magazine subscriptions, but they just stacked up and went unread. I skipped a couple of local bike nights and purposely missed Saturday morning coffee meetings a time or two because I wasn't feeling up to it. I was burned out...

I needed to evaluate, prioritize and revitalize. Enter the mountain bike. 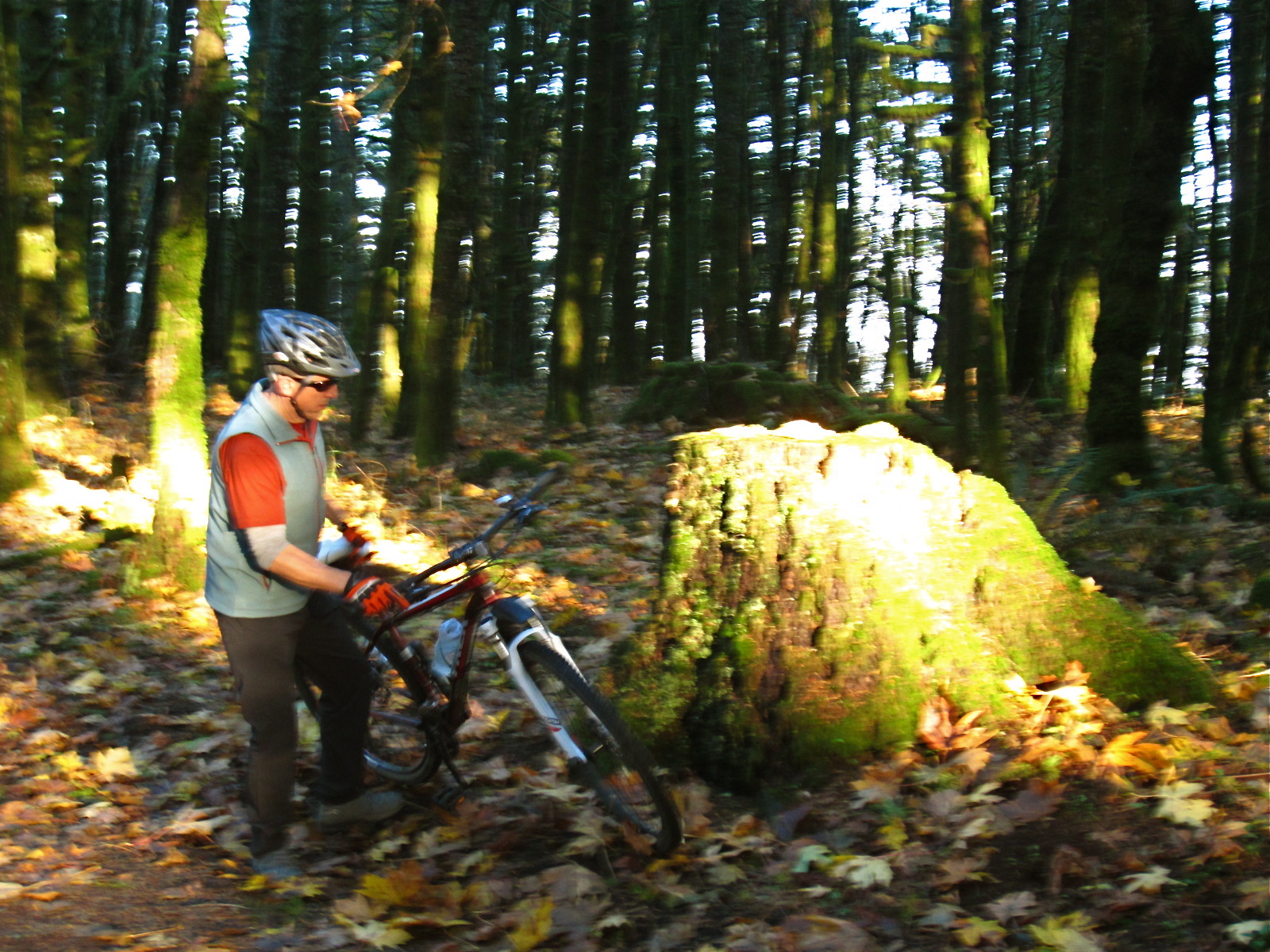 I work four 10 hour days which affords me Friday off, but Trobairitz works Friday mornings, so I use that time to hop on my bicycle and ride up the secluded forest trails where I can be alone and recharge. No traffic, no people, no cell phones. I have been having a great time climbing the trails and even more so, the ride back down. I've been following mountain bike group social pages, reading articles and perusing maps. I'm discovering several great trails and parks in the area while improving and gaining confidence in my mountain bike riding ability. Adding other hobbies and activities helps me maintain a balance, rather than focusing on just motorcycling. 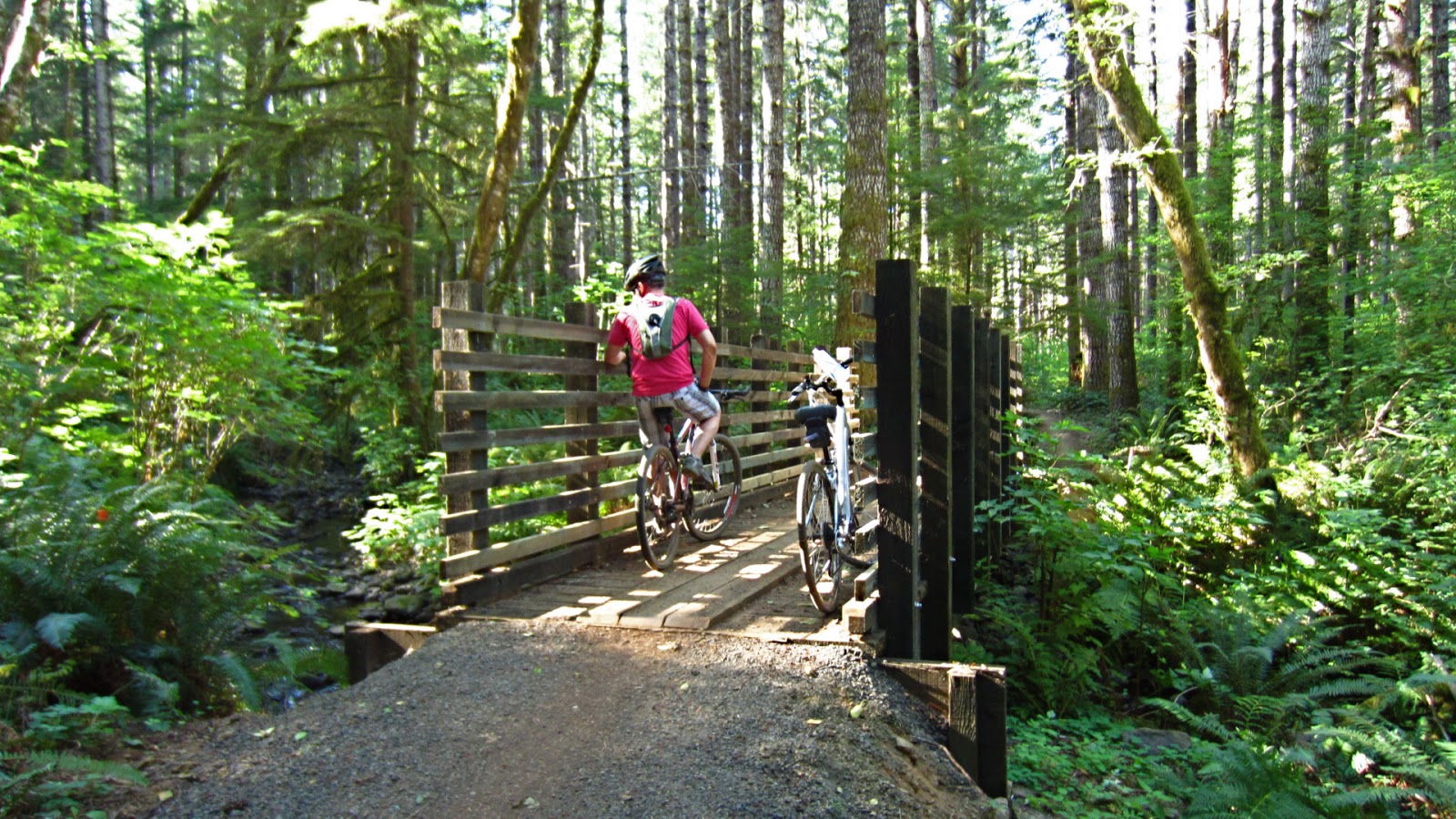 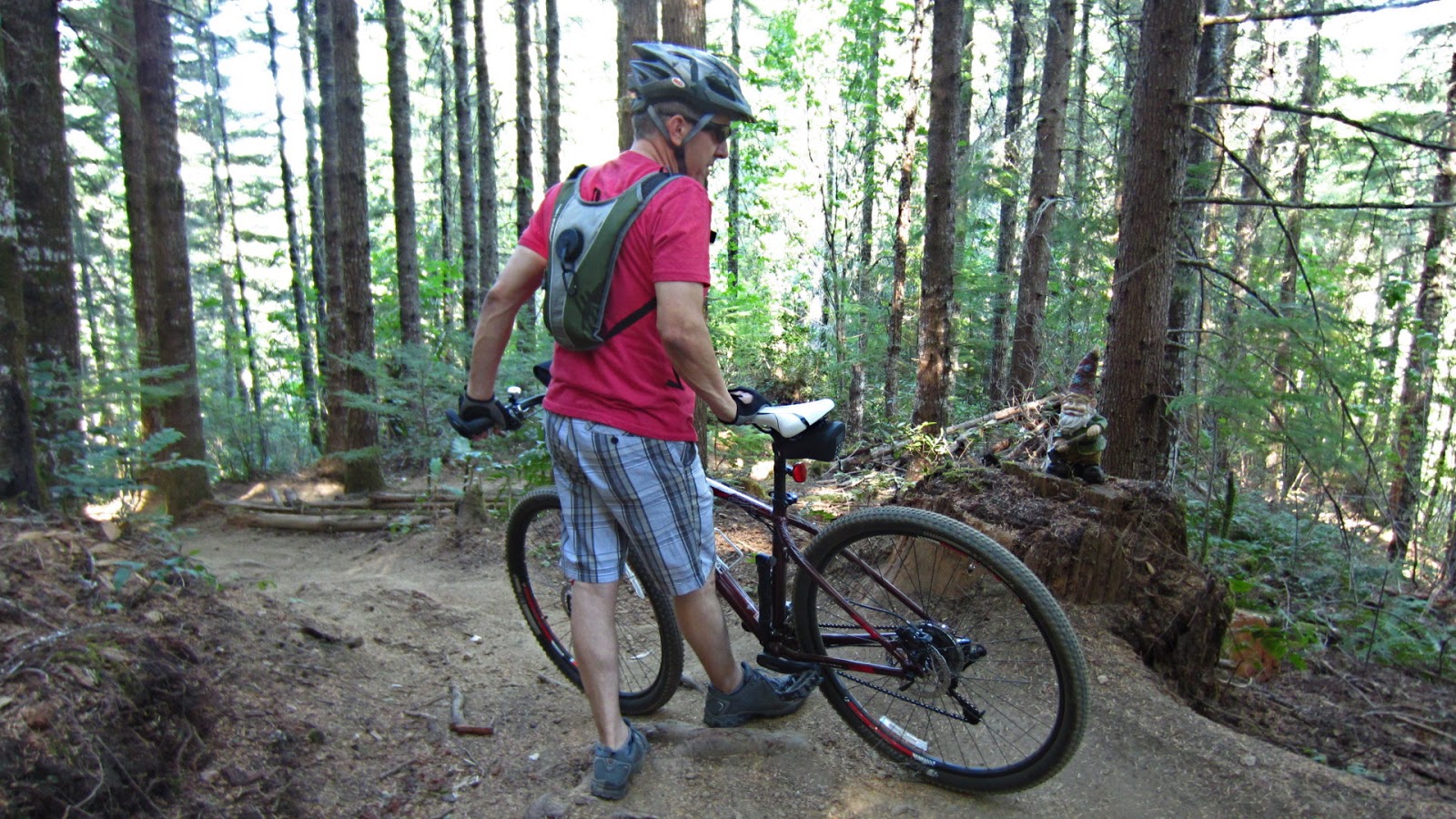 I haven't been on the Tiger (or my blog, sorry) since our ride to the Tillamook Air Museum in October, and our bikes have been parked in the garage since. An unexpected half day head start on the Thanksgiving weekend and sunny, dry weather presented an opportunity to "service" the bikes. I've been meaning to rotate the tires, stir the oil and replenish some of the old gas in the tanks with fresh gas. Since I was out of practice and for self preservation, I took Trobairitz's Gladius out first, I'm a much more cautious and somewhat reserved rider with her bike. I rode to the top of Marys Peak, stopping for a couple photos along the way, then rode home to swap bikes to take my Tiger out on the same route. 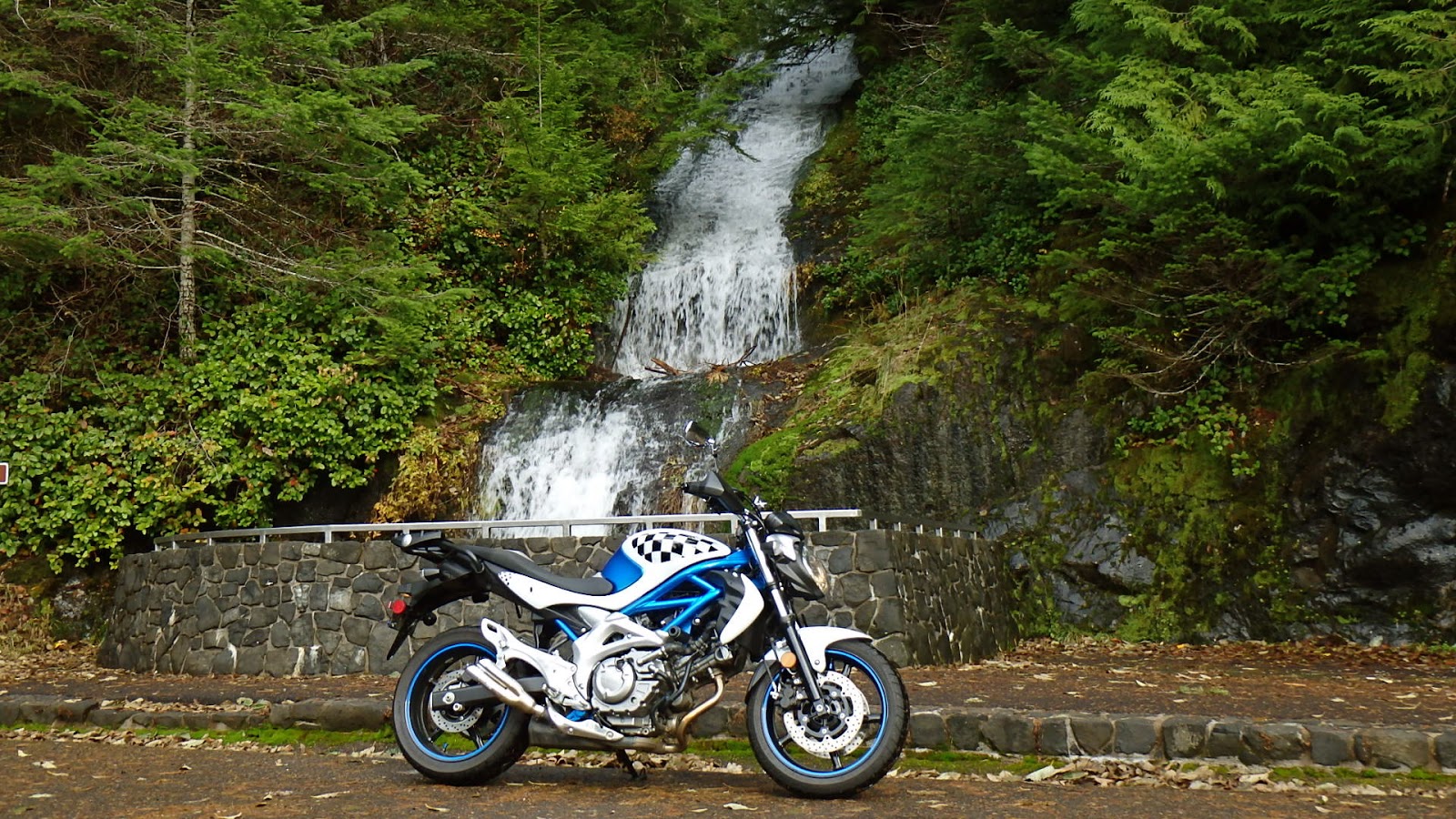 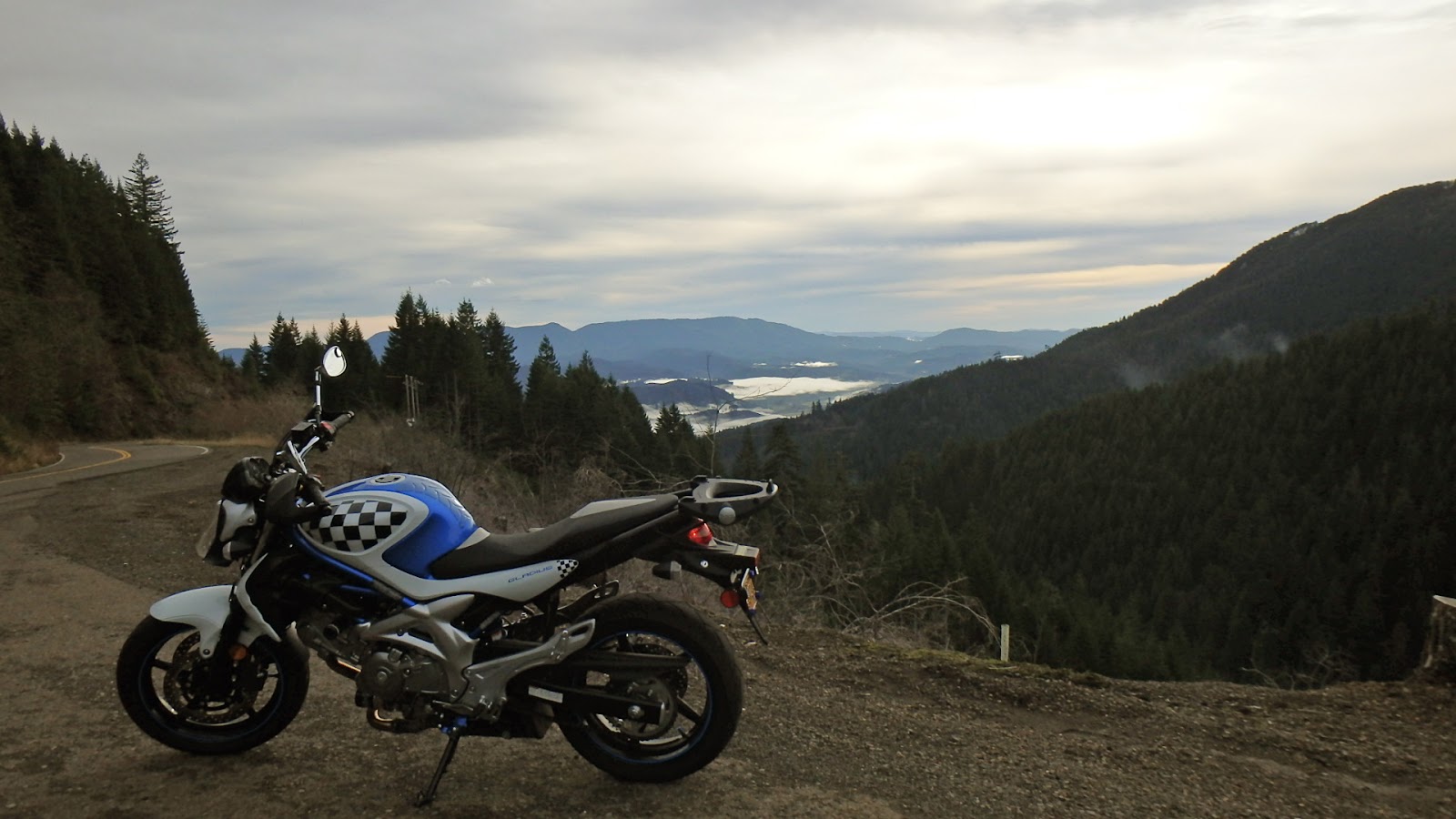 Hoohoo, the Gladius is a blast to ride, but I forgot how much fun it was to ride the Tiger! It wasn't long before I slipped back into the familiarity of my bike, quick on the throttle and leaning through the corners. I was quickly reminded how poorly my tires gripped wet roads, especially roads littered with leaves, fir needles and moss. I also remembered how well ceramic brake pads can lock up the rear wheel. Evidently it wasn't just the bikes that needed to be run, I had a few cobwebs that needed clearing out too. I eased up a bit and just tootled along, enjoying the sunshine and adding a gravel road to my route for a thorough refresher. What a great ride. 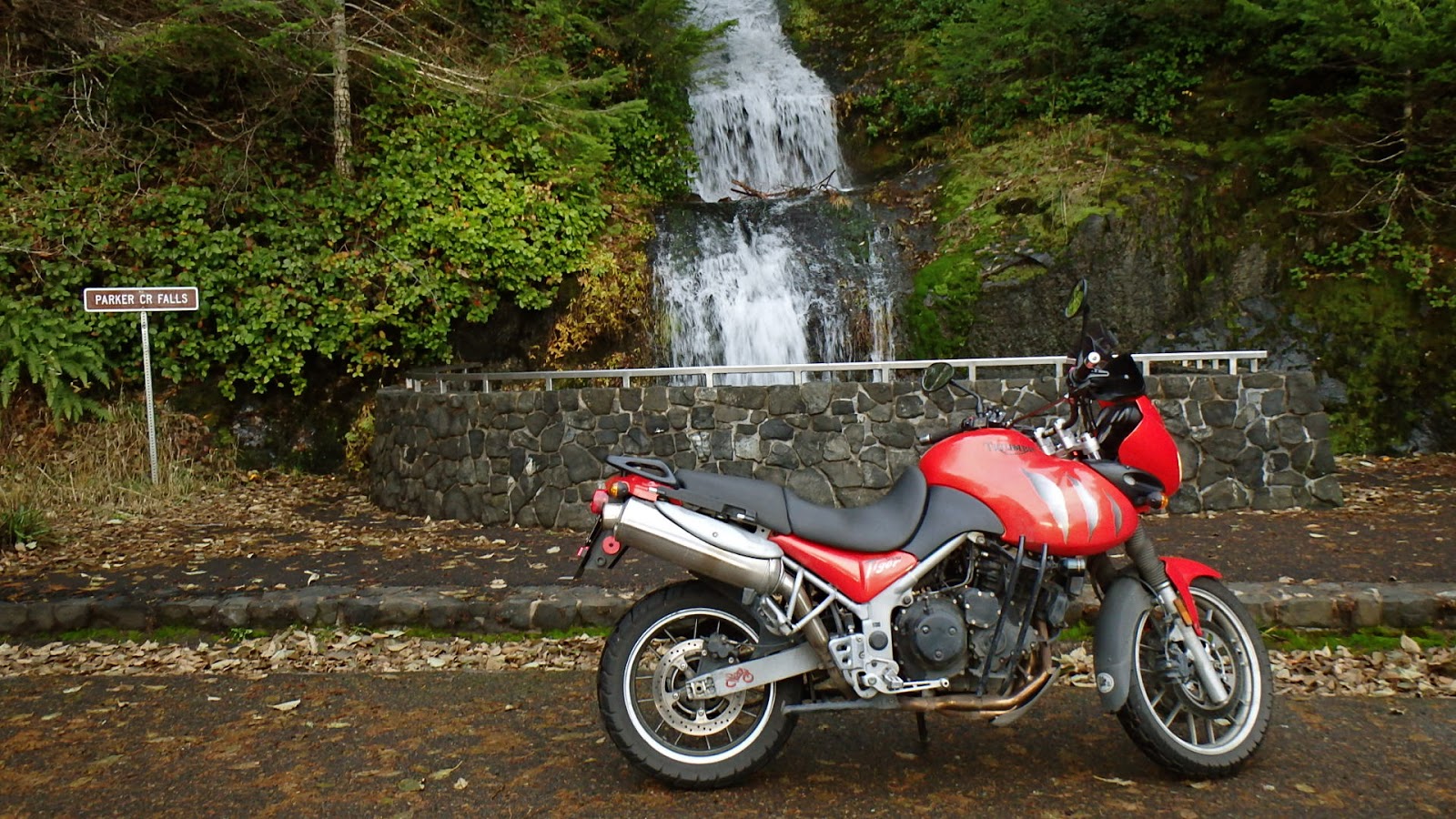 With both bikes safely parked in the garage and a seasonal IPA in hand, I contemplated my next ride, hoping to take the dirtbikes out Thanksgiving weekend. Unfortunately it rained all weekend so we didn't go, it's one thing to be cold, it's another being cold and wet. I discovered a direct correlation between degrees of temperature (ºF) and rider's age when it comes to motorcycling, kids don't care if it's cold out but I don't much care for riding in temperatures below 39ºF. In the meantime, I am happy to go for drives instead of rides, walks and hikes or bicycle rides instead of fighting the cold and wet weather on the motorcycles. 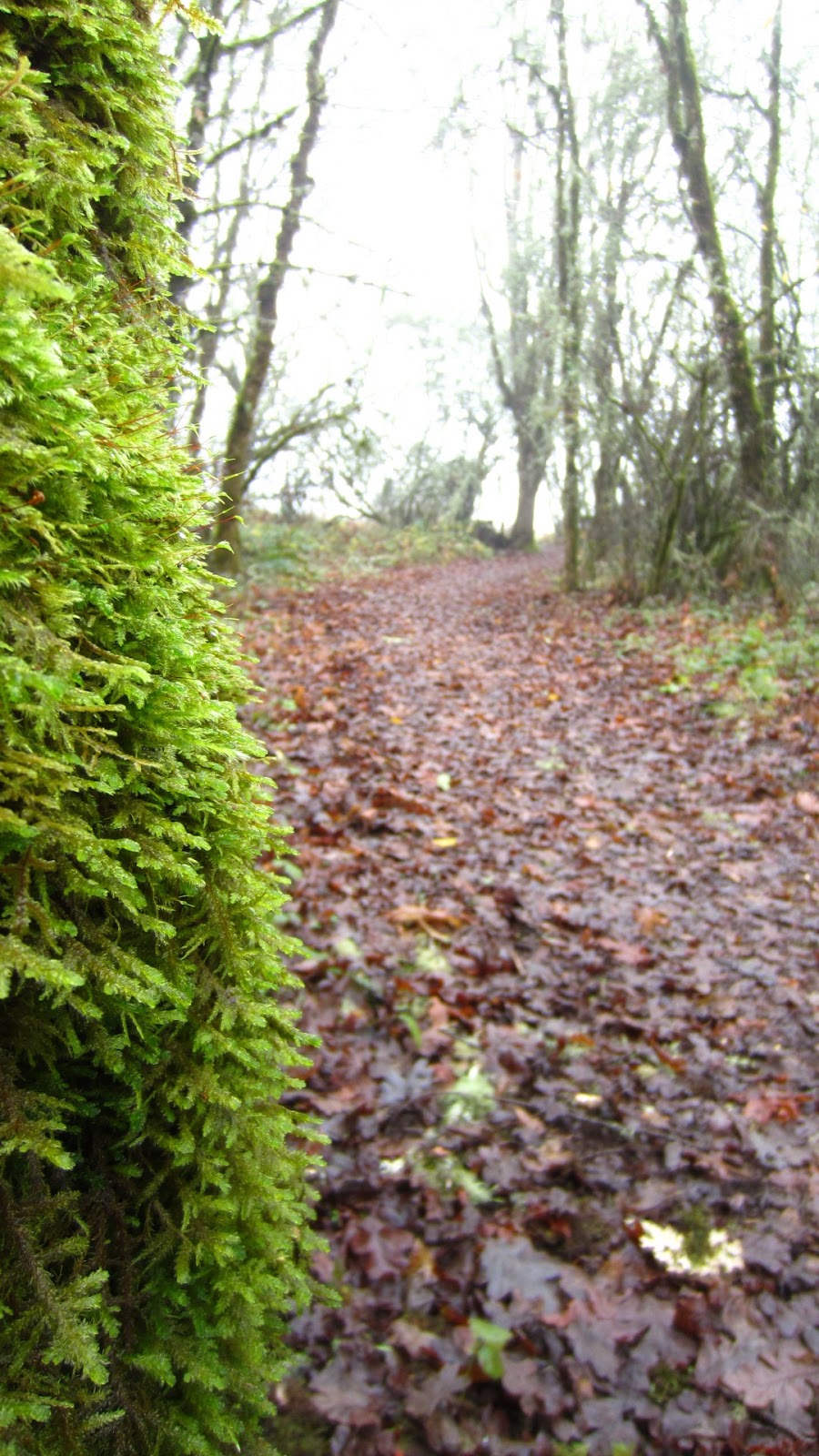 After somewhat of a hiatus from motorcycling, I'm enjoying a renewed interest in riding and I'm looking forward to teaching bright eyed and bushy tailed students next season. Classes start in January, first with an instructor and mentor update for me, then it's boots on the ground the following weekend.

Now if Mother Nature cooperates, maybe I can get a few more practice rides in, as well as a few more hikes, bicycle rides... and blog fodder.