I keep going back to work on a project I've been tinkering with in the garage. I don't know how we got on the subject but a couple of us at coffee one morning were talking about garage space, driveway angles and the ability or lack there of to negotiate our bikes in and out of the garage, past vehicles in the driveway and out to the street. The conversation went way too far into having an electric, motorized, switchable turntable in our garages to spin our bikes around so we could ride in, spin and ride out. Like this: 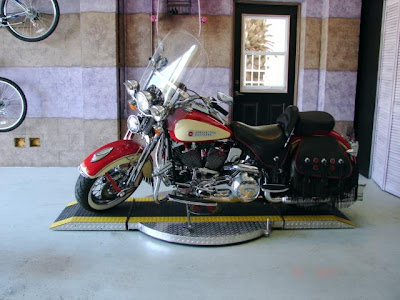 So I had a sheet of 3/4" plywood in the garage left over from the kitchen remodel, all I needed was a Lazy Susan and some casters. I searched the interweb and found that Lowe's has a 1000 lb. capacity Lazy Susan bearing. 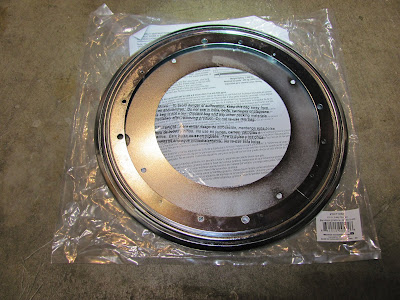 I had originally mounted it directly to the plywood in hopes to keep the spinner as low profile as possible. Unfortunately, plywood flexes and I once I had the bike up on top of it I couldn't get it to turn at all. I'm not an engineer by any means so all of my work is by trial and error.

I did have a length of pine shelving kicking around left over from a closet renovation. I rarely throw anything away, maybe that's why my garage is so crowded. I don't need to sell bikes to make room, I just to throw a bunch of this crap away and stop doing renovations.

I screwed the pine plank to the underside of the plywood taking note of the warp in the plywood and remounted the Lazy Susan to the plank. 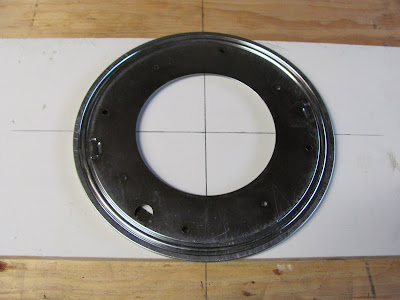 This of course raised the plywood up off the floor and now the bike on the platform resembled a drunk coed dancing on a roadhouse bar pedestal table.

Honestly, the reason I wanted a table platform is that I'm too lazy to put the bike up on the center stand to spin the bike. The Tiger is a tall bike for a guy like me with such short legs, so to slip even a 1/4" under the center stand and try to get it up is nearly impossible. 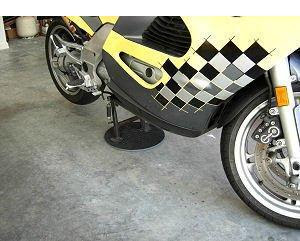 This was discussed in the original coffee conversation.
I needed casters to take up some of the wobble along the outside edge. There wasn't a lot of room and I played around with a couple of ideas before I wandered into Harbor Freight and found these little gems. 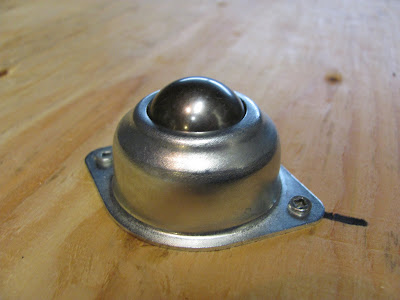 I mounted eight of them around the outside of the plywood and with the pine shelf being 5/8" this raised the outside just enough to make giant skateboard. 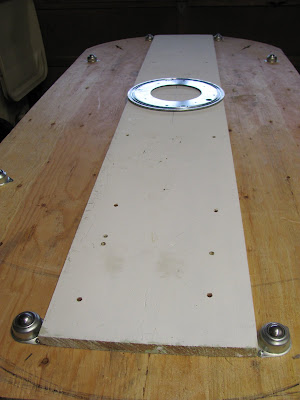 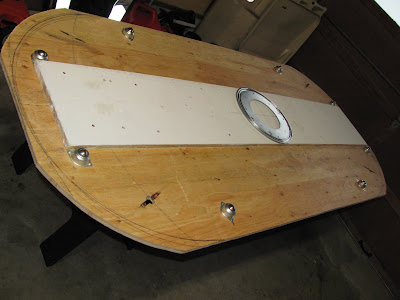 I couldn't get the bike onto the table without it skating away (more trial and error), so I had to find something to place under the Lazy Susan bearing. I found a piece of rubber mat at the hardware store but discovered it wasn't quite thick enough to meet the bearing so I scrounged around the garage and found an old rubber welcome mat kicking around. I said I never throw anything away. It was just tall enough along with the rubber mat I bought at the store to work and hold the table still. 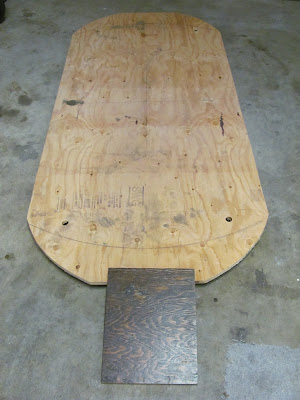 Using a ramp, I was able to back...er, heft the bike up onto the table and give her a spin. 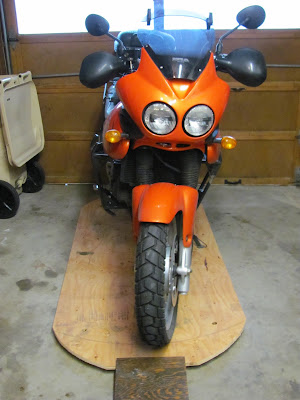 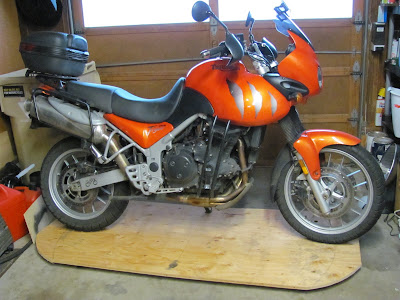 The garage is just wide enough. 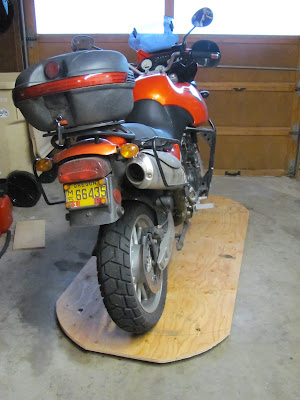 And around she went.
I've used it the past couple of evenings and it works great. When Trobairitz and I both ride, she can pull in first, spin her bike around then back it off into the garage and then I pull in spin it round and leave it parked until my next ride.

Now all it needs is a coat of paint and a more permanent ramp built. I know there's some old paint around here somewhere from some sort of renovation.

it pours, and what do you do when faced with a rainy Saturday? If you're ambitious you go for a ride like real motorcyclists. But I come home with wet gear nearly everyday from my commute.

So instead, we explored our favorite roads in anticipation of summer. We had lunch after our usual Saturday morning coffee and decided to run up Mary's Peak in the car to see if the snow level had receded. We made it to the second gate before we ran into snow. Unable to proceed any further without running the risk of getting stuck, I snapped a few photos of the car. 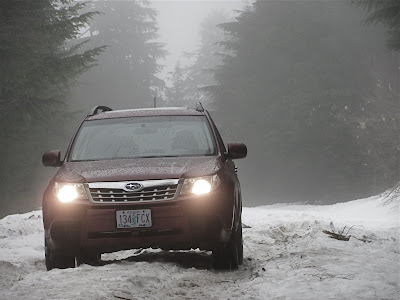 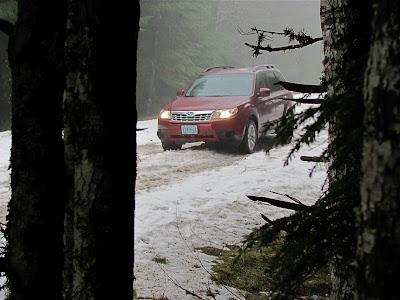 The road up was littered with debris from the trees this winter, overhanging birch trees make a terrible mess. Conifer needles carpet the corners and gravel lay in wait for the highway maintenance crew to sweep up this Spring. It may be several weeks yet before the road to the top is clear. 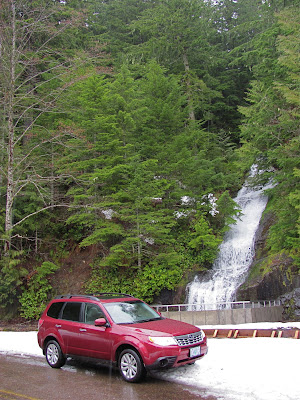 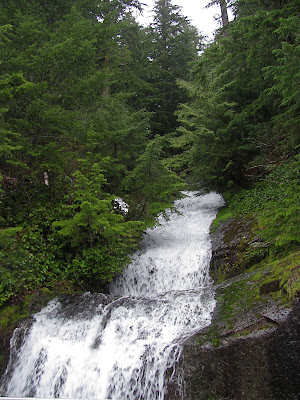 On our way down the mountain we decided to take the journey over to Harlen via the National Forest Road 3000. It is just a gravel road but there are a couple of side roads to throw you off if you don't know where you're going. Having only taken this road once before, several years ago I cheated and plugged in the GPS to have tracks to follow out, just in case. 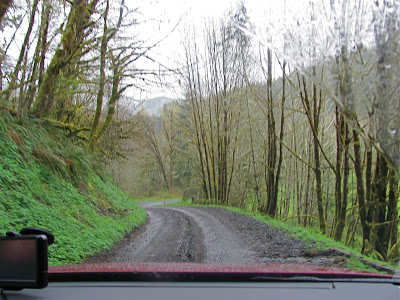 We found a couple of camping spots, discussed how we would camp including sleeping arrangements and are now saving our pennies for a rooftop tent. This made the most sense as we can camp anywhere the car takes us, mountains, beaches or WalMart parking lots. We don't have to sleep on the rocks or the cold damp ground and hopefully will be a little bit safer from things that go bump in the night. 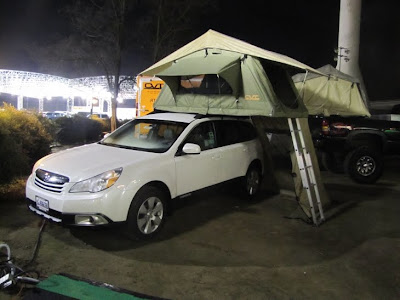 We found our way out easy enough, I knew not to get too far off the beaten path of our spontaneous adventure as we didn't have food, water, shovel, map or even a full tank of fuel nor did we tell anyone where we were. I'll be adding those essentials to the blanket, flashlight and minimal first aid kit already in the trunk. 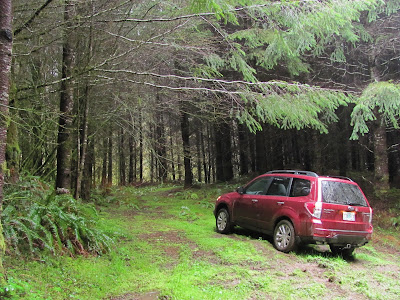 We had fun and stayed relatively dry. 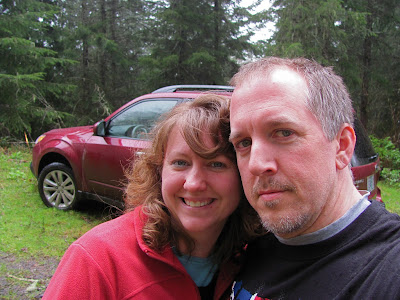 Now we're looking forward to exploring more dirty roads in both the car and on the bike.

ABCD - Will You Take Part?

ABCD - Will You Take Part?

Maybe you would like to join in with this.....

A Bloggers Centerline Day, or ABCD, will take place on Sunday 1st May 2011.

The plan is to inspire as many bloggers as possible to go outside and take a photograph of themselves on this day, wherever they are in the world. The photo can be creative, arty, contain more than one person, be in any type of location and can contain anything else you like. It must however contain the centerline of a road and at least part of you, the blogger. 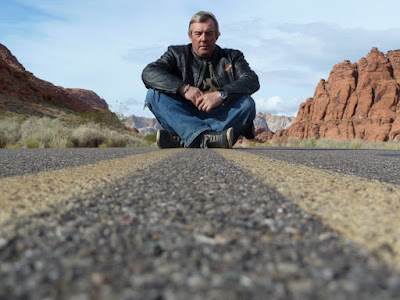 Rule 2 - the picture must be of yourself, and you must be a person that publishes a blog. You can include whatever else you like in the picture, including other people if you wish.

Rule 3 - the picture must include the centerline of a road.

Rule 4 – you should publish the picture on your blog on 1st May 2011, along with a few words about the picture and why you chose that location or pose.

Rule 5 - when you have posted the picture on your own blog, put a comment on http://garysusatour.blogspot.com/2011/04/abcd-will-you-take-part.html and include in that comment the address of your own blog post containing your own picture.

Gary France will then pick his favourite photos and publish these as being the winners. There will be a prize of $100 awarded to the overall single winner, as chosen by Gary.

In order to get this event known as widely as possible, please copy and paste this posting onto your own blog, including the title. Please do that today!

As a reminder to yourself to take the photo and post it, put an entry into your diary for 1st May 2011.