I posted earlier about the Precision Maneuvering Clinic that Team Oregon hosted for instructors, and promised more photos as they became available. Of course Lucy and I were the most photogenic. 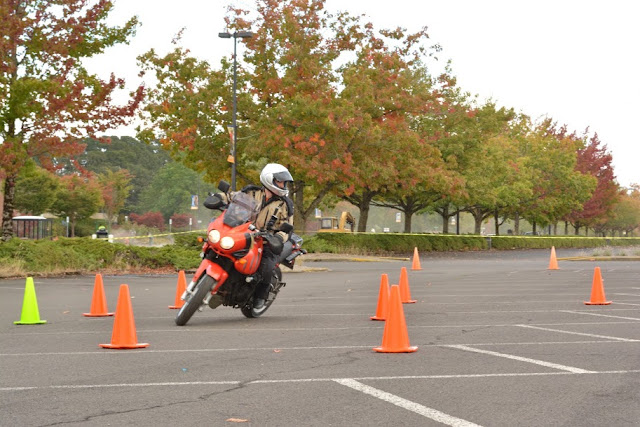 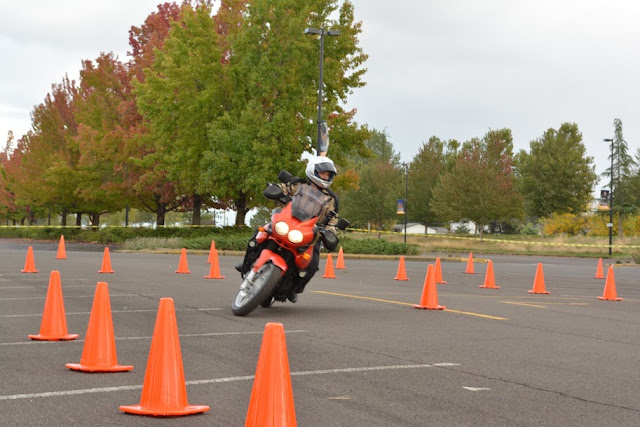 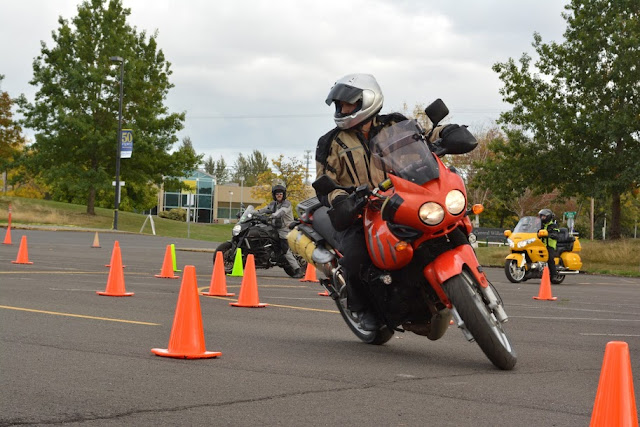 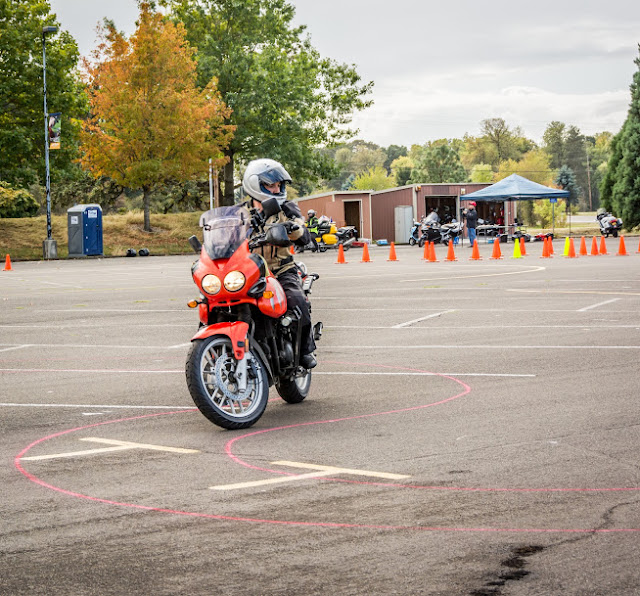 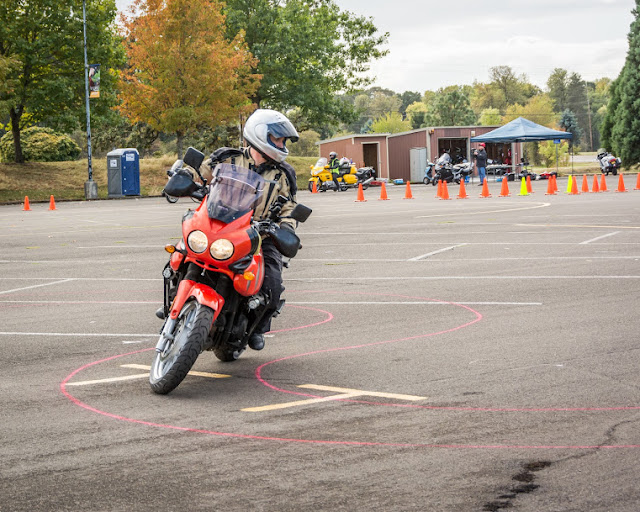 My fellow instructors, and friends: 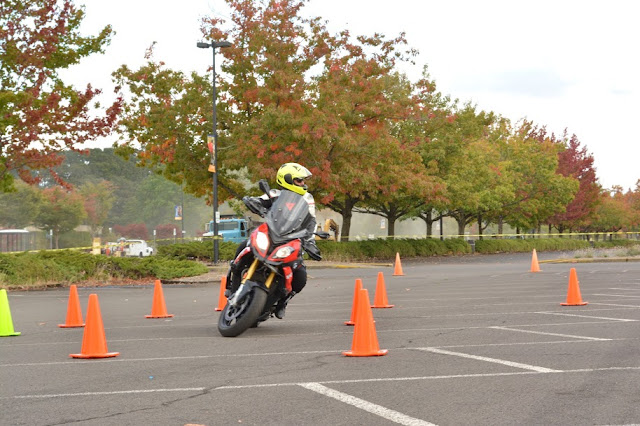 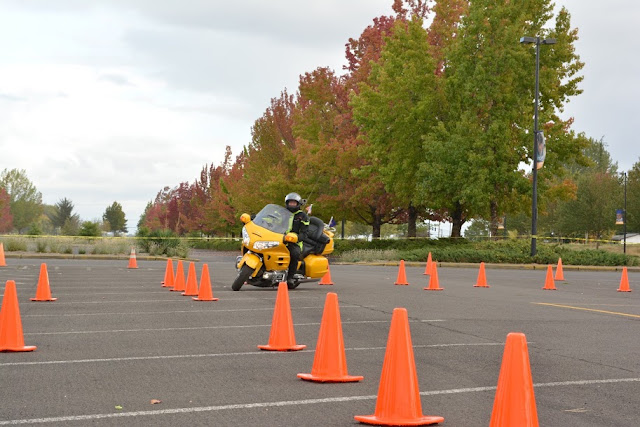 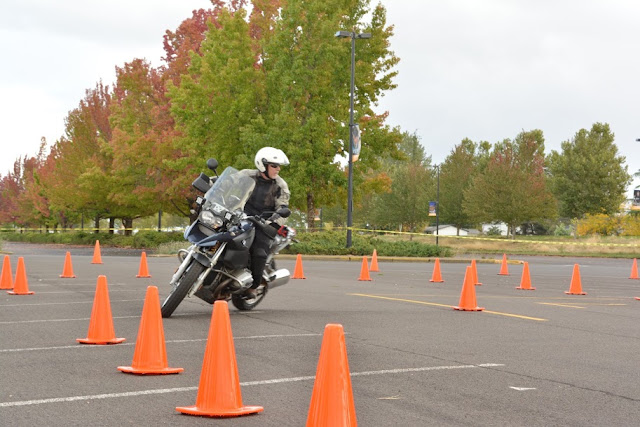 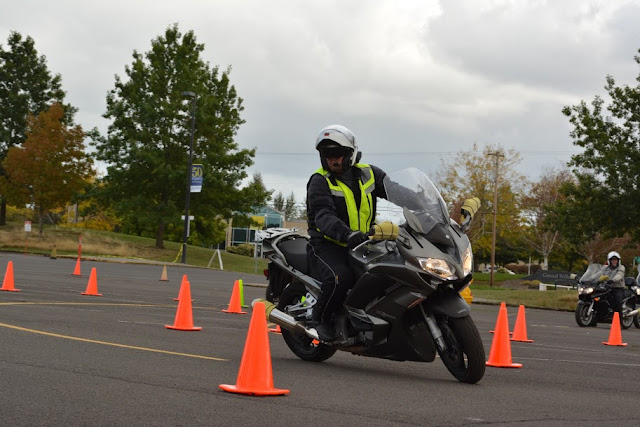 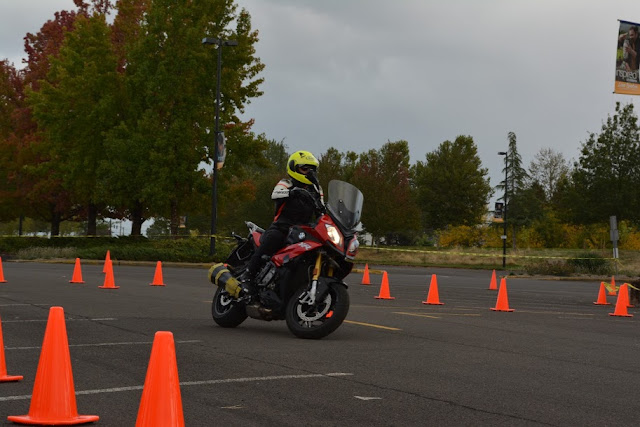 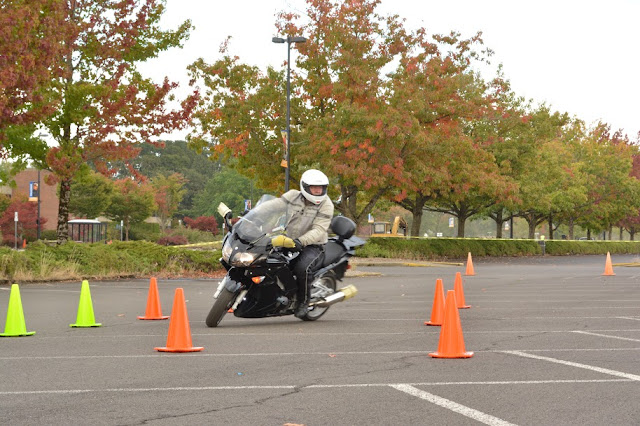 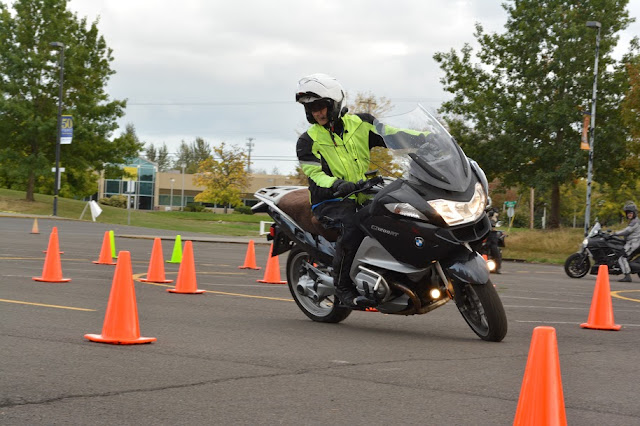 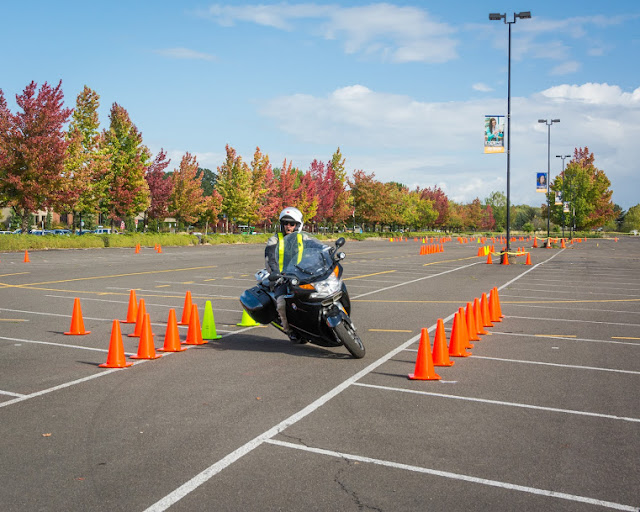 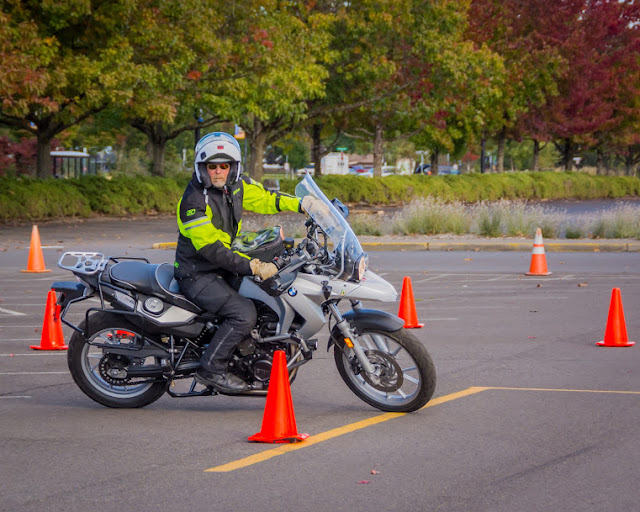 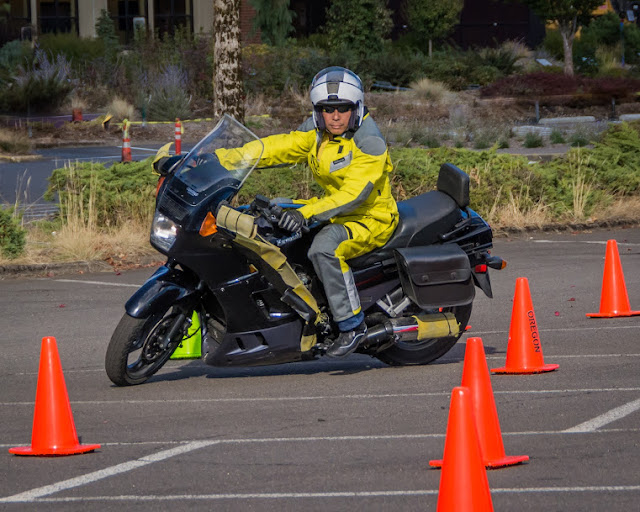 Pat Hahn edited a video of the Precision Maneuvering Clinic, turn it up!

If you ever have the opportunity to take more training, please do. If you don't believe me, Geezer With A Grudge posted his experience with a very similar class. Coincidence?
http://geezerwithagrudge.blogspot.com/2017/10/157-who-is-expert-rider.html

A former coworker (and personal friend), just traded his Kawasaki KLR650 for a much more manageable Suzuki DRZ400S.

When Jeff was originally looking for a bike, he told me he wanted something that would be suitable for riding gravel roads, yet comfortable enough for highway speeds and asked me for advice. I told him, if I were to own just one bike, it would be the Kawasaki KLR650. The Swiss Army Knife, or the Leatherman of motorcycles, a well rounded, do nothing well, but everything bike. That, and Jeff stands 6 foot something tall, so he could straddle it well enough. And so it was...

I rode with Jeff, and a couple other coworkers on the OBDR6 (Oregon Backcountry Discovery Route 6) back in July of 2016. Jeff has mentioned more than once how whooped he was riding that weekend, and how much that heavy KLR pig of a bike took out of him.


While working with Jeff, he would mention his previous bikes in conversation, street bikes and cruisers. I suspected that he did not have a lot of off-road or gravel road riding experience, so I concluded that one reason he was so exhausted after that weekend ride was that he was fighting the bike. That, and he was suffering a hernia at the time, oh how familiar that sounds.

During that ride I had my little Yamaha XT250; I bought the smaller bike on purpose, it had been several years since I rode bikes as a kid so I wanted to get used to a smaller bike moving underneath me. I also don't suffer from that little man, neanderthal mentality that bigger is better, or that I have to prove myself by riding the latest, greatest, biggest, baddest machine to come off the showroom floor. I have way more fun flogging smaller bikes than dragging big bikes out of precarious situations. 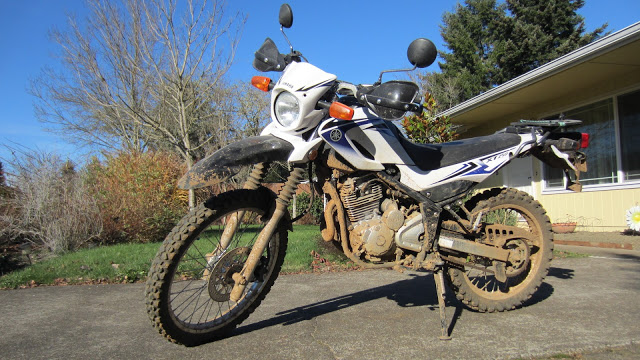 Since then, I've gained a little more experience and a lot more confidence riding that little XT250. I flogged that little bike to where I felt I could step up to something a little more road worthy, yet still single track dirt capable. Again, I don't possess the "go big, or go home" attitude and immediately dismissed the KTM 690 Enduro, or any KTM for that matter, the Honda XL650, and Suzuki's DR650.  I test rode the Suzuki DRZ400S during a Suzuki Demo day and fell in love. The DRZ400S was nearly as light as the XT250, slightly taller, and would be much more capable on the highway loaded down with camping gear. Perfect!


I still love the XT250 and highly recommend for learning to ride gravel roads, exploring trails or plodding around the woods. I would still have it if Trobairitz didn't have the TW200 in the fleet for me to flog at will. So I bought a DRZ400S and sold the XT.

Jeff quit his job, semi retired, and found part time work much closer to home. He'd ride his bicycle to work in the morning, ride home for lunch, then drag out his KLR to ride back to work for his afternoon shift. It wasn't long before he realized the KLR was just too big and heavy for quick jaunts to work, and for running errands after. Again he asked me for advice, finally someone who values my opinion and actually listens! He asked me about the DRZ, so I told him how light and nimble it was, how it had plenty of power, and made for a fantastic dual sport, but this time I added "not as an only bike". I explained that my intention was to put street tires on the Tiger, use that as a commuter, tourer, and for known gravel road jaunts. The DRZ is my explorer of unknown trails, single track OHV riding, bike camping, and Black Dog Rally bike. Exactly the same type of riding that he wanted to do too, and so it was...

Now to get it dirty, which is quite difficult with Jeff, as he likes to keep his things tidy. We named his KLR "Dusty" in jest; we were out on a ride one day and he complained that his bike was dusty, I replied "that's a pretty name" and it stuck.

We set up a play date and I took him out on familiar logging roads around here to get him used to his new DRZ.

He couldn't believe how much lighter, and more manageable it was over the KLR, not to mention how torquey the 400 was. We had much better weather the following week and set up another play date. I planned another gravel road ride of about a hundred miles to accommodate his schedule and his fuel tank. One short coming of the DRZ is its tiny 2 gallon stock fuel tank which is only good for just over a hundred miles. He bought a rear rack and a Rotopax gas can to overcome this problem, I have a 4 gallon Clarke Tank, but as I mentioned he likes to keep his shit tidy and isn't big into bike mods. Accessory or farkles are fine, modifications take much more convincing than I'm willing to invest. 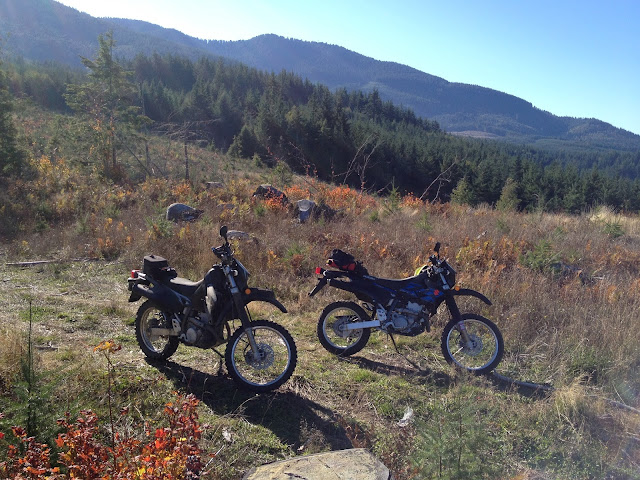 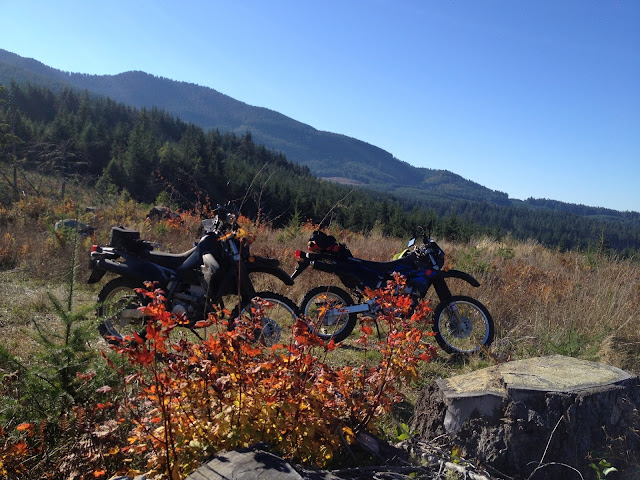 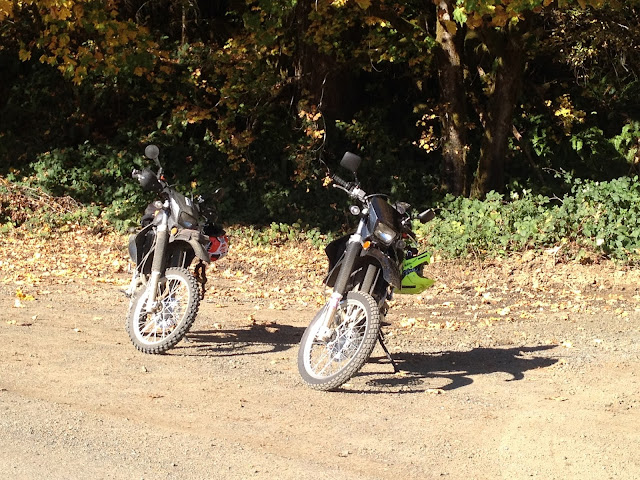 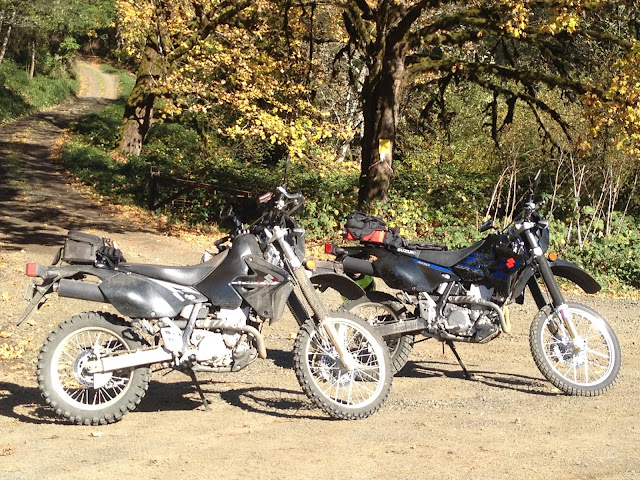 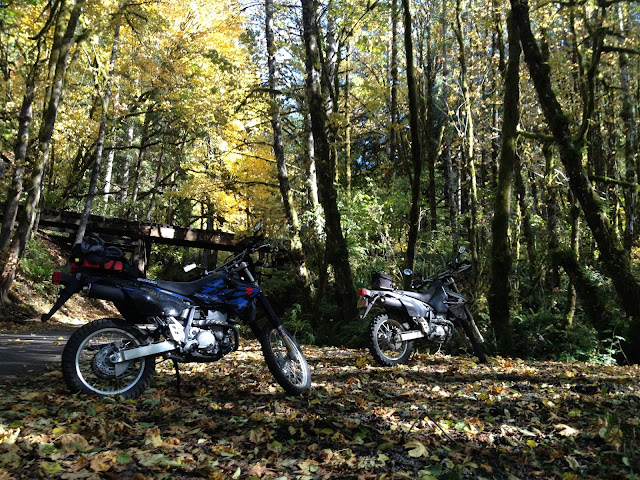 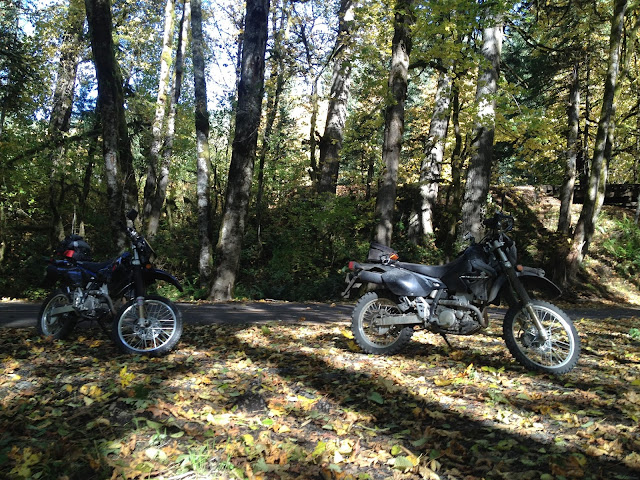 The rain has returned, which means we spend more time on the computer than our bikes, which can be dangerous. Not physically, but financially; I did say he like his farkles. Our next play date is a garage day to install his Rox Risers, Oxford heated grips, and Cycra Handguards. 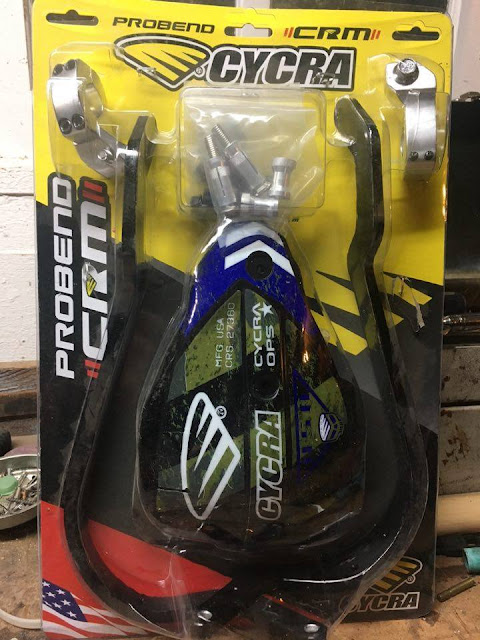 I'm glad he's having fun, and I have a Friday riding partner.

Now to find a rabbit hole to lead him down... ooooohhhhh Andy, wanna come out and play?