This weekend was the Oregon Vintage Motorcycle Show and Swap Meet at the Benton County Fairgrounds just out my backdoor. So what's a guy to do but check it out. Saturday was the vintage ride and Sunday was the show and swap meet.

Saturday morning we met the gang for coffee as usual then Rick, Trobairitz and I headed over the the fairgrounds to get a map of the ride route. Unfortunately, it wasn't nearly the crowd they had last year but a die hard few showed up. 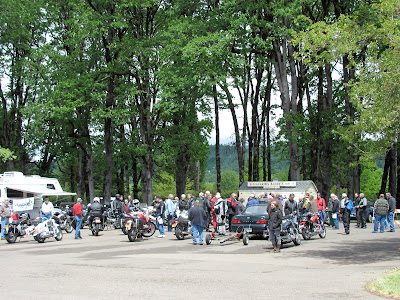 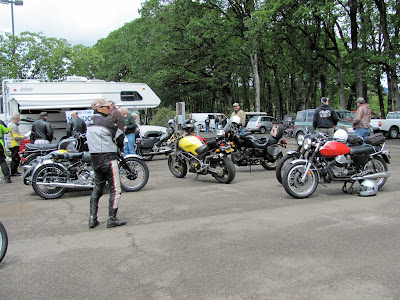 SPCDaytona brought his hack and we recognized another bike, Loosepart's Triumph: 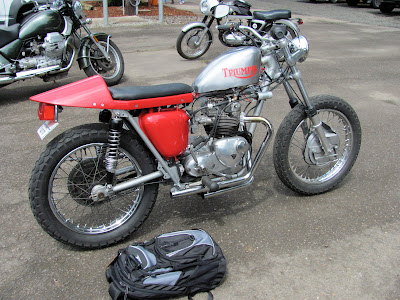 The route lead the riders down Bellfountain Road to Monroe and then over to Peoria Road and back up to Corvallis so we caught up to the group at Alpine and grabbed a video. (Although not great quality, I really need a decent video camera).

With just the three of us on two bikes we opted for lunch in Eugene and we gave Wiley Coyote a ring and interrupted his motorcycle maintenance day with a lunch invite. Two of the Sushi places we stopped were closed for the afternoon so it was over to Cafe Yumm for a late lunch. Then we booked it for home missing yet another ominous rain cloud threatening Eugene and left Wiley ducking for cover.

Sunday morning had me waiting at home for the rain to stop before heading to the show and swap meet, although with this being Oregon the rain didn't stay away for very long and we all got a little damp.

Evidently Kari and Ron were at the show but alas we missed each other. However, I did run into Dan Crouch whom always shares a smile and a cheerful greeting.

I managed to snap a few pics between rain showers, but the parking lot show wasn't nearly as big as last year. 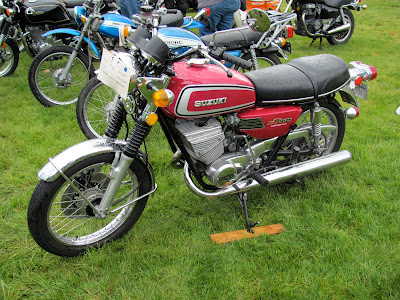 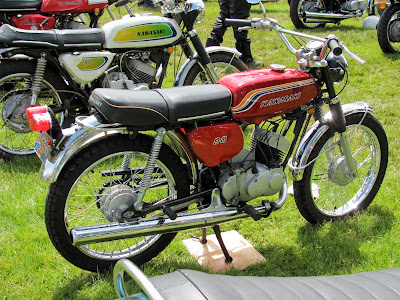 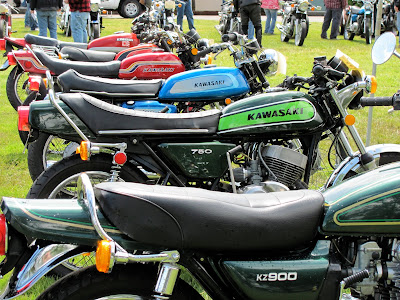 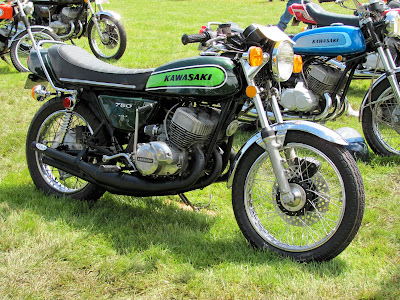 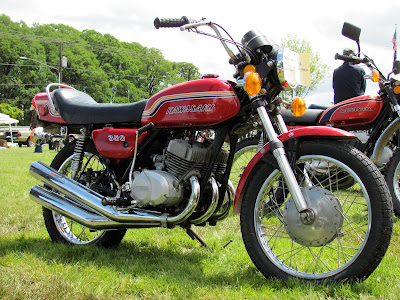 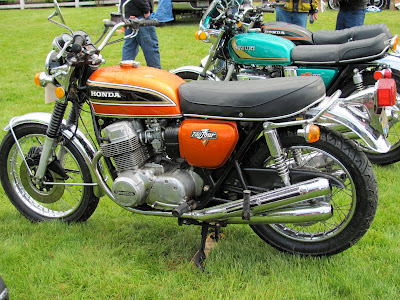 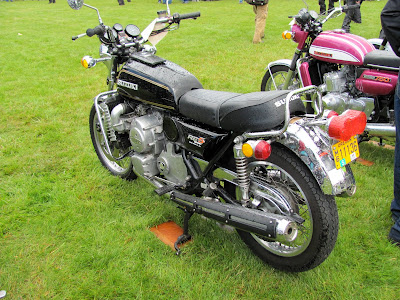 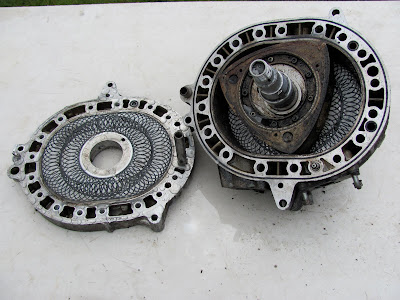 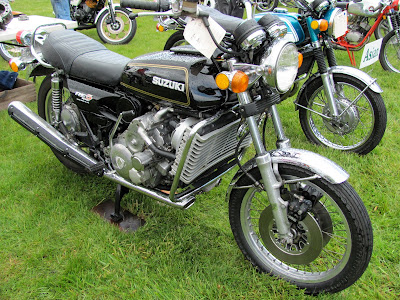 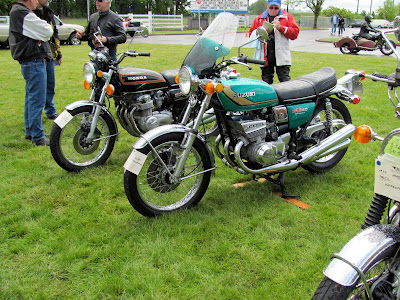 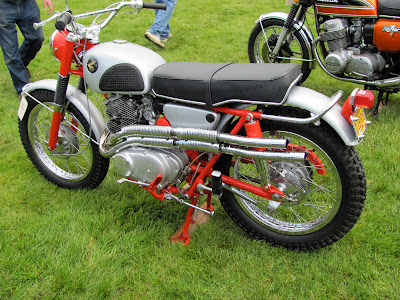 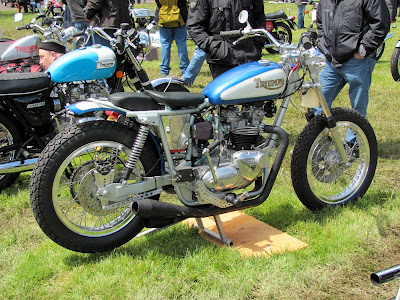 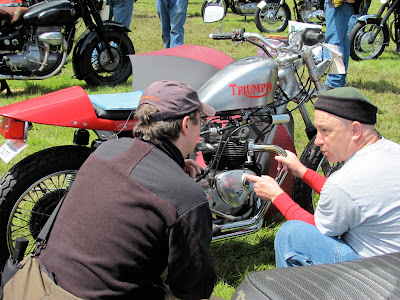 Next up, the OSU Motorcycle Visibility Day on Wednesday, currently the weather is calling for sunshine and 68º...finally? Stay tuned.

May is upon us again, although not nearly as warm and dry as last year, the event schedule is jam packed of stuff to do.

We started off with Saturday morning coffee, an informal weekly gathering much smaller than the monthly gathering of Bike Night which took place last Wednesday. 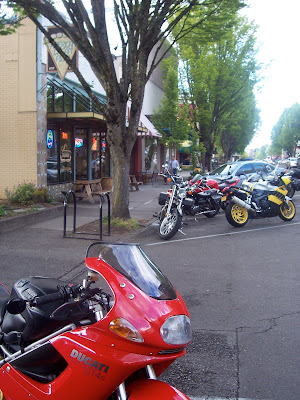 And despite the 6 ways of weather that day, we still had another great turnout. 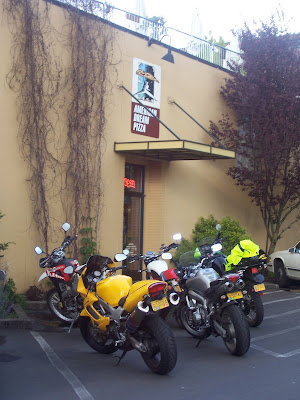 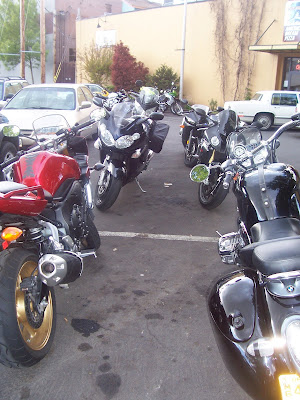 Next weekend, May 15th is Bolty's annual Newbie Ride, she set this up last year and it was a tremendous success. Asking local riders to volunteer to lead and sweep small groups of new riders along some of our favorite routes at a leisurely pace. It brings new riders out and introduces them to group riding in a safe non-intimidating environment. We stop a couple of times throughout the route to answer questions, offer advice and explain what our roles are as group leaders and sweeps or tail riders. We adhere to the speed limits and keep a close eye on all riders. This year we have just as many volunteers as we do new riders. I think they secretly enjoy taking it slow once in a while but won't admit it, either that or they want to see what their best fuel mileage is.

The following weekend, May 22nd and 23rd is the Oregon Vintage Motorcycle Show and Swap Meet which was just listed in the Rider Magazine April 2010 issue under Great 2010 Destinations - National Events Calendar subtitled Lusting For Rust. This is a great event, the best part being the parking lot on Sunday. The old bikes are great and Kawasaki is the marque this year, hard to believe Kawasaki as vintage. I may just fire up the KZ900LTD this year and ride it to the show.

That same weekend is Rhody Days in Florence, I have only made it to this event once and it's alright if you like that brand of bike. 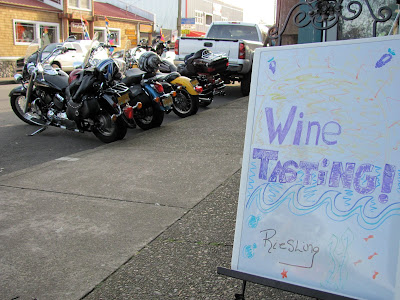 I prefer a much quieter gathering like the OSU Motorcycle Visibility Day on May 26th, I had a great time last year and look forward to it this year. 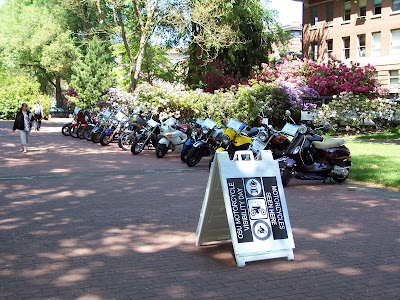 Sometime this month is supposed to be the Ride To Ona Beach but I can't find anything about it and Rod hasn't updated his website since last summer. I'll have to phone him and ask. 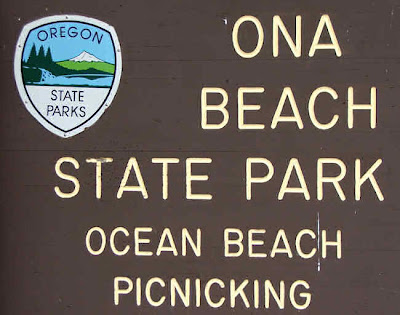 I thought the month ended with Thunder in the Garden but they changed the date again this year from the last weekend in May and now conflicts with both the OVM event and Rhody Days the week before. I made sure they knew about their short notice reschedule and conflicting dates last year so I thought I'd better go this year, but that won't be happening, I gave them shit again. Besides, showing the same bikes several times in a two minute video does not make for an exciting bike show and showing the beer taps twice is supposed to deter drinking and riding.

May is Motorcycle Awareness Month, be careful out there.
Posted by Troubadour at 10:30 PM 2 comments: