Another year has come and gone so it is time to reflect on 2012. 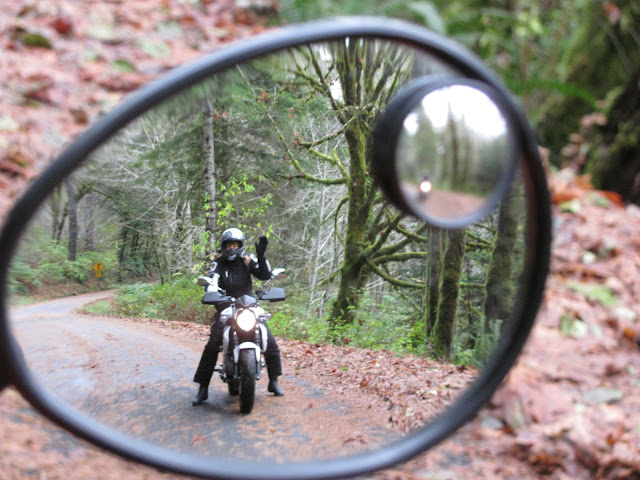 Of course, starting with most recent memories first, I'm thinking how terrible 2012 was and how the New Year simply had be better. But, then I looked further back and although the last couple months of 2012 were... let's say less than ideal, the rest of the year was pretty damn fantastic.

Unfortunately, along with two thousand and twelve playing me the unemployment card, my mom passed away on December 1st.

I took her passing pretty hard. My unexpected lay off was a bit of a blow, a difficult transition and an emotional roller coaster for me with looking for work all the while thinking of my mom.

We went to Washington in October to visit her as she wasn't doing well and although I didn't want to admit it, deep down we all knew we were there to say goodbye. I'll be forever grateful for making the trek north and getting to see her. It was only two short weeks after our visit that she was admitted to hospice where she received the care, attention and the  rest she needed.

Thanks so much to friends, family and most of all Brandy's love and support. I did my best to keep a positive attitude, eventually letting go of some resentment I had about my job and realizing how fortunate I truly am. I was able to evaluate what was important to me and discover what it really means to be happy, also life is too short and money costs too much.

It took me a bit longer than I expected to find work, I patiently waited for companies to get through the election, then the fiscal cliff scare and now year end budgets, but great news came when I was offered a position with a major distribution center and I start my new job in January.

Looking back through both of our blogs, reviewing photos and posts detailing everything else we did last year I must admit, despite the lows, 2012 was pretty awesome.

Just two weeks ago it was a brief conversation leading to a quick and impromptu decision to attend the Motorcycle Show turned into a welcome respite.


Another way to get me out of the house and blow the stink off, Trobairitz humors me and tags along when we go for hikes... 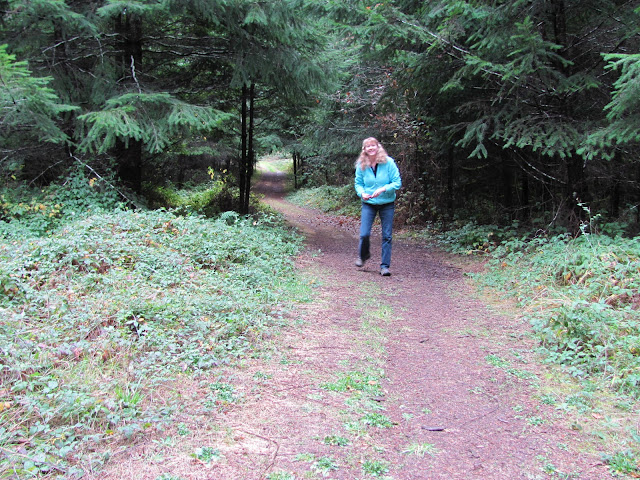 I say 'tags along' because I hike then wait for her to catch up. 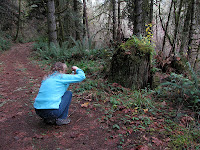 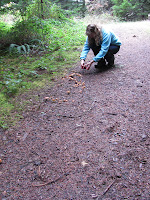 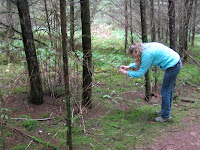 It's not that she's slow, it's the fact that she stops for so many photos.


This works out well for both of us as it gives her blog fodder and me a chance to catch my breath and admire the scenery.


Last summer we went to Seattle, camped out under the skies of Sea-Tac, saving hotel fare for the Experience Music Project Museum instead. 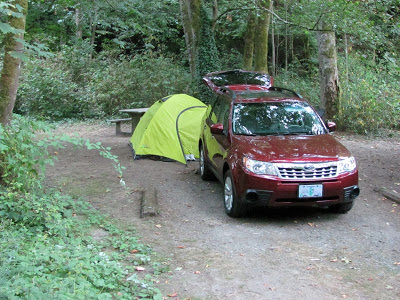 Then that same weekend met Sonja and Roland for the ACE Cafe Summer Shakedown at the LeMay Museum.

It was only two weeks earlier we met up with friends from Canada that we hadn't seen in years and plans for next year are already being discussed.


Then there was the iMBC2012 in Baker City and Hells Canyon, what a fantastic trip. We made some new friends and the blogosphere became a little bit smaller. 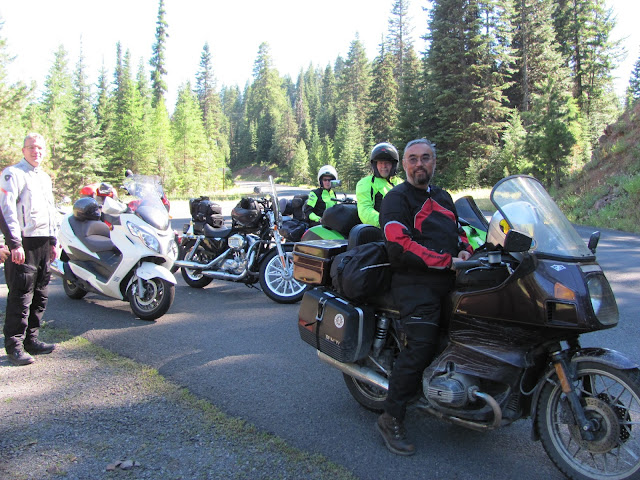 Stig and Mrs. Stig came to visit and I got to ride with the famous Everyday Rider himself. 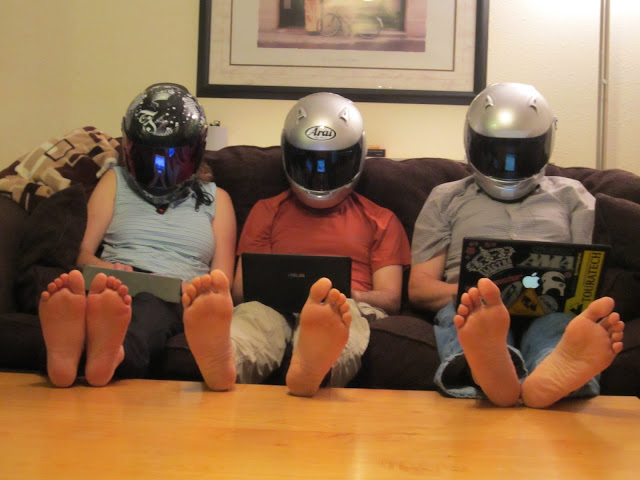 For 2012 I also got to ride a Triumph Bonneville for a little while. 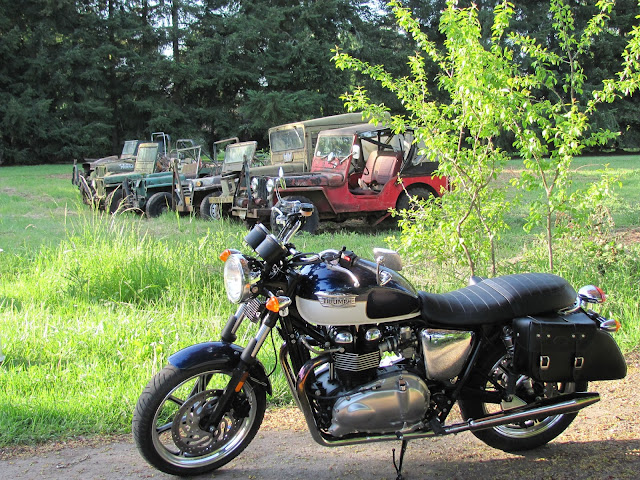 And we visited giant marshmallow farms in Tillamook. 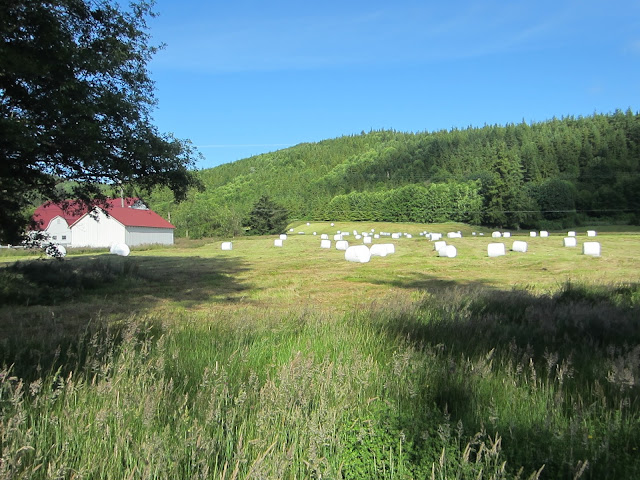 Fuzzy taught us how long February can really be with her photo challenge #29 in 29.

Great challenge but never again, it was fun and a whole lot harder than you'd think.


We also started the year off with a honey-do project... 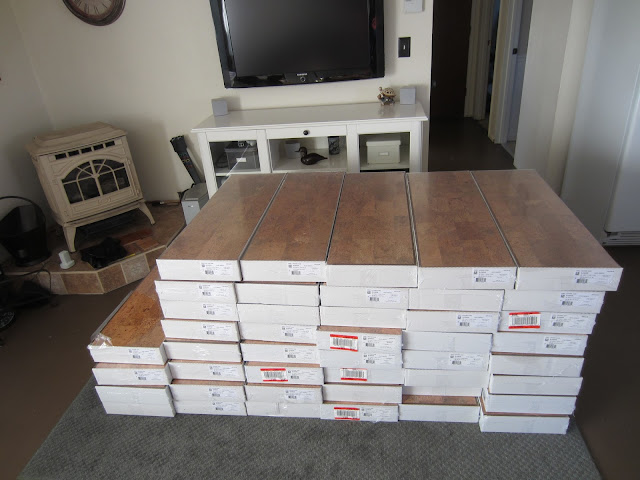 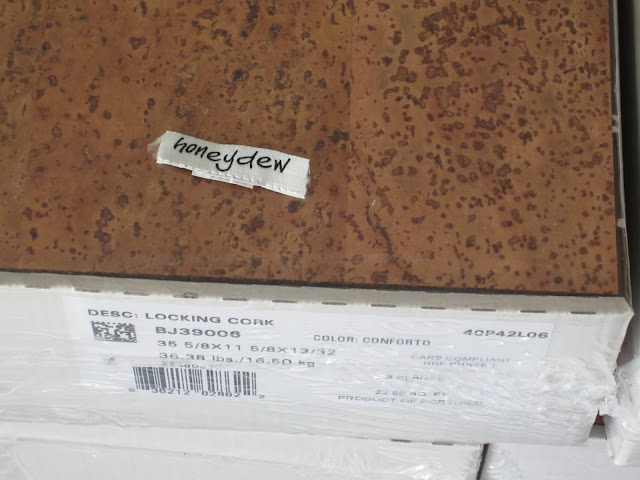 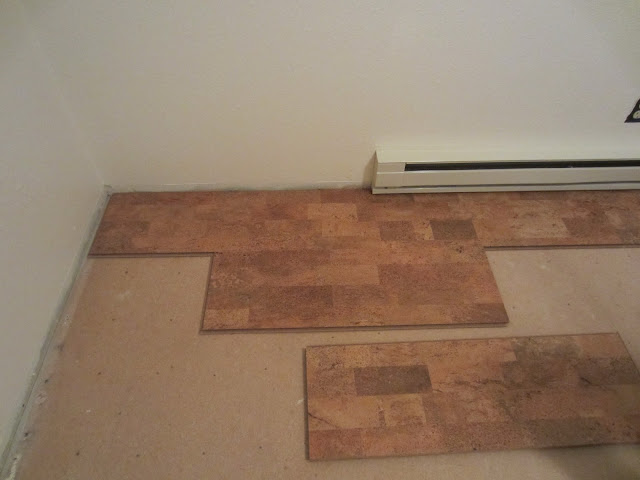 And finally put down flooring in our home.


Of course I cannot forget all the support, the fun and the journey I started by joining Team Oregon Motorcycle Safety Program. I can't wait to get back into the classroom and on the range. 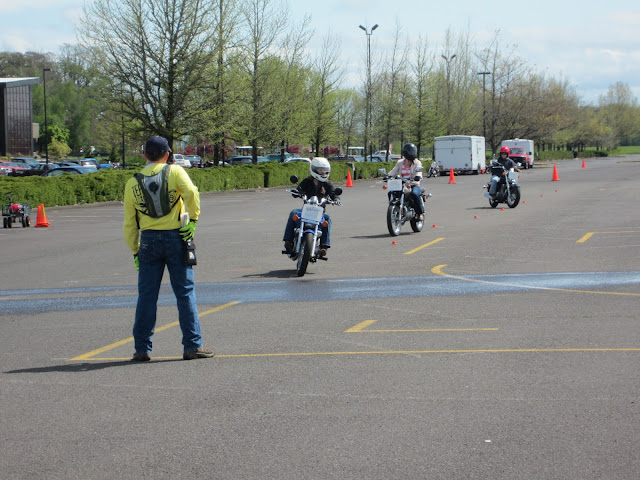 So all in all, 2012 turned out alright. I had a lot of fun, made so many new friends and overcame some personal challenges. Of course without a commute the last four months of the year I didn't cover the same mileage I did in 2011, but even so, with 8653 miles I only came up 1885 miles short from last year. I'm closing 2012 with my odometer reading 43,227 miles and here's to many more miles and smiles in 2013.

Happy New Year everyone and shiny side up!


You know those houses in the neighborhood that put the Griswold's Christmas light display to shame?

Rick posted up a group ride to visit houses in the neighborhood where it looks like someone threw-up Christmas all over it. It has been a long time since I've been out on the bike and since it was the end of the world, we didn't get out for a Solstice Ride so out the door I went.

We started with the local Pepsi Company that puts on a Christmas light display every year, they decorate their warehouse and grounds with Christmas lights, plywood cutouts of  cartoon characters and animate them with lights, mechanical movement and music. Hundreds of people drive the grounds every year as tradition, it is difficult to stop for photos on a motorcycle as it holds up traffic but you can read about it here.

After riding through the Pepsi display we rode slowly past a couple of houses with much smaller electric bills and knowing that our next stop was going to be awesome. 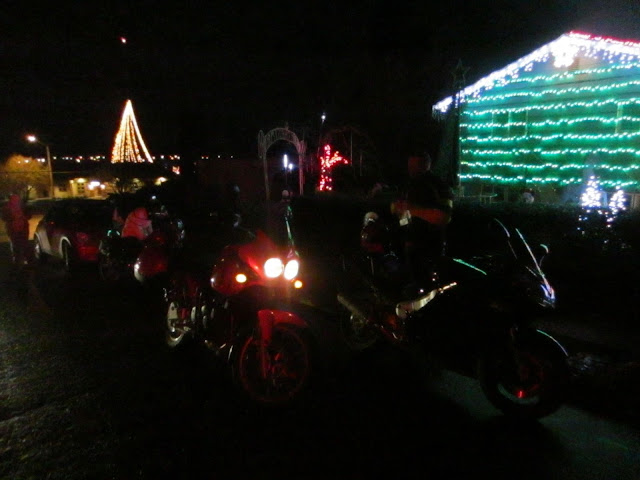 This guy's neighbors invest just as much money in blackout curtains as he does in Christmas lighting, it is quite blinding.


We stuck around for a couple three songs then went off in search of other displays. We rode past a couple more well decorated houses then stopped at this popular house which has been decorated every year for as long as I've been here. 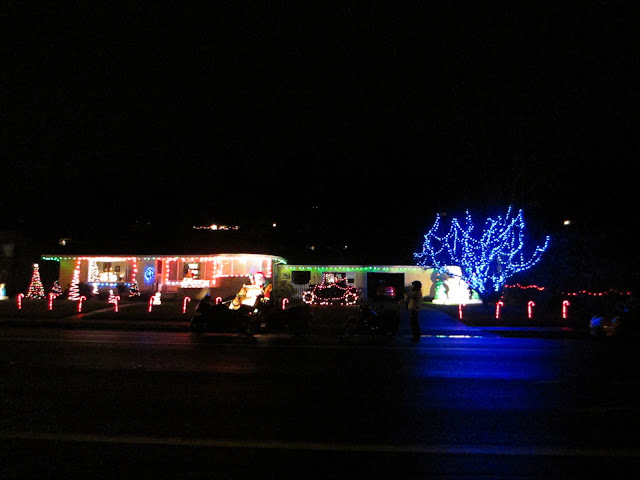 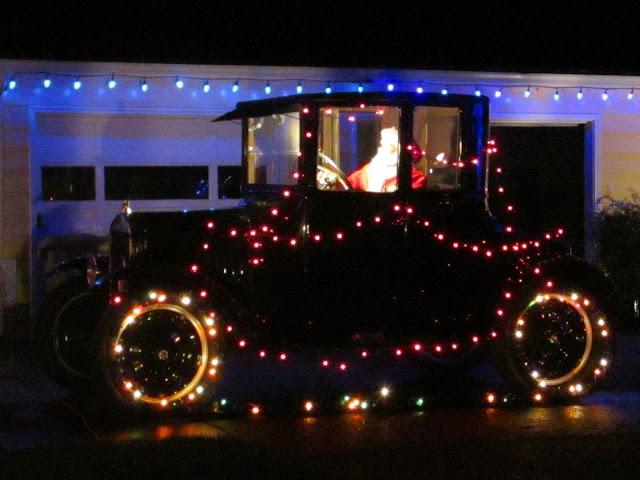 ...but this is too cool for school.

It's The End Of The World

That's great, it starts with an earthquake, birds and snakes,
an aeroplane - Lenny Bruce is not afraid.
Eye of a hurricane, listen to yourself churn,
world serves its own needs, dummy serve your own needs.
Feed it off an aux speak,, grunt, no, strength,
The ladder starts to clatter with fear fight down height.
Wire in a fire, representing seven games, a government for hire and a combat site.
Left of west and coming in a hurry with the furies breathing down your neck.
Team by team reporters baffled, trumped, tethered cropped.
Look at that low playing!
Fine, then.
Uh oh, overflow, population, common food, but it'll do.
Save yourself, serve yourself. World serves its own needs, listen to your heart bleed dummy with the rapture and the revered and the right - right.
You vitriolic, patriotic, slam, fight, bright light, feeling pretty psyched.

Six o'clock - TV hour. Don't get caught in foreign towers.
Slash and burn, return, listen to yourself churn.
Locking in, uniforming, book burning, blood letting.
Every motive escalate. Automotive incinerate.
Light a candle, light a votive. Step down, step down.
Watch your heel crush, crushed. Uh-oh, this means no fear cavalier.
Renegade steer clear! A tournament, a tournament, a tournament of lies.
Offer me solutions, offer me alternatives and I decline.

Fuzzy posted a photo of her Knobby Tire Christmas Wreath she made last year. I was too late and too busy to make one then, but since I have way too much time on my hands now what excuse did I have?

We don't celebrate Christmas so this is more a Solstice Tire Wreath made from a Shinko Dualsport Tire  off my Tiger. 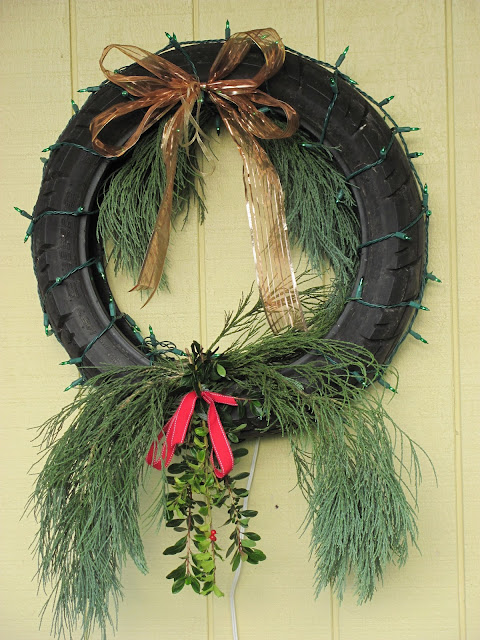 All it needed was a little greenery, so I went out to the backyard and took a few cuttings from our Giant Sequoia, some holly and a couple sprigs of Escallonia and Ta Da!!


I'll post another photo tonight when it's lit up.

Addendum: I added a sprocket in the center... 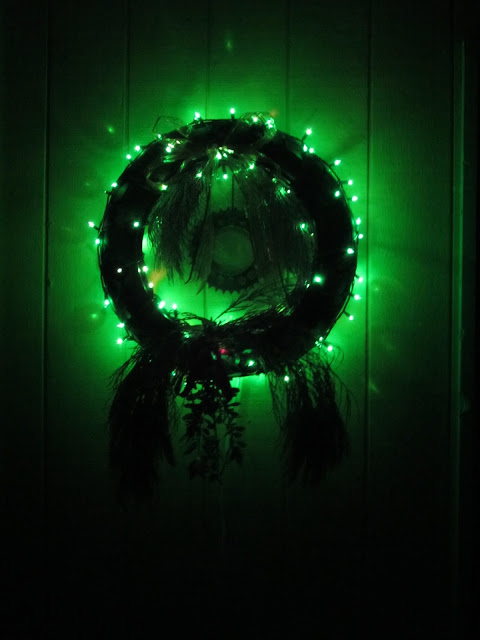 I decided to make one for Trobairitz to match her bike.