Monday was the first ride since Daylight Saving Time ended and my ride home was dark and wet. I ride in the dark all the time, it is nothing new to me and I am somewhat comfortable riding in the dark. But Monday something I never expected lurked in the darkness.

Normally when I ride in the dark it is after eight. There is minimal activity and there isn't much to go bump in the night but I watch for deer, critters and pot holes. The problem when Daylight Saving Time ends is that it isn't late, people aren't at home finishing dinner, doing the dishes or watching a movie. They are headed home from work, running errands and following their normal routine. I too was following my normal routine and this is when I was at my most vulnerable. I did everything I always have, I rode home along the same route, traveling at the same time I do everyday, only this time it was dark. 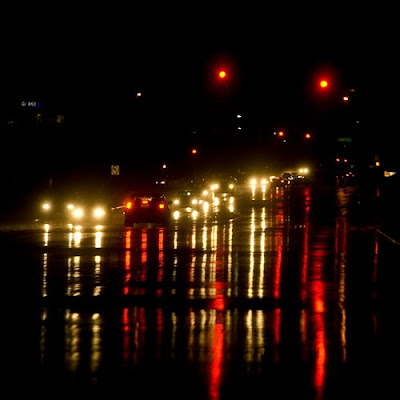 My route just skirts me around OSU campus, where I am diligent to watch for students wearing their team colors of black, black and more black. 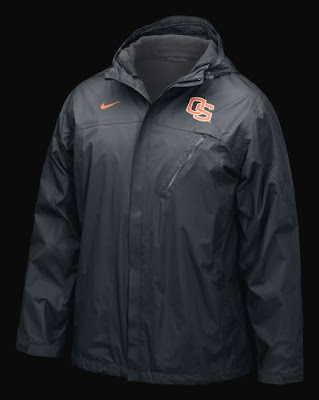 Their other team color is orange, which is much more visible but not nearly as fashionable. Why a university in wet, rainy Oregon wouldn't promote orange over black as a team color beats me. UofO just south of us in Eugene seems to have the same problem with their team colors of green and yellow.

I can make myself as visible as possible and this works great for others to see me but does absolutely nothing if I can't see you. 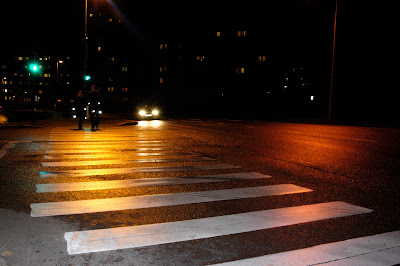 Once I get past campus the streetlights become fewer, the sidewalk ends and the road narrows. I make a right onto a two lane road flanked on both sides by ivy covered hillsides. Slowing to 25 mph I climb a small hill, crest then ride down the other side. The road was never intended for the amount of traffic it sees, but aren't most city streets like that? It is a little beat up but it bypasses two traffic lights and a whole mess of gnarly traffic. Tbolt can attest.

Monday evening was an uneventful commute until I started ascending the rise, moving to the right to avoid the ruts on the left. Then to my surprise I came upon a young lady in dark clothing nearly scrambling up the bank with what may or may not have been a baby strapped on her back. It happened that fast. I did not see her until my headlight beamed in her startled face. She obviously saw me, but had she been in the roadway with nowhere to go, it would have been too late.

I nearly turned around and gave her a flashlight I carry in my top case, but thought better of it. The last thing I need is to be maced, tazed, arrested and thrown in jail for stalking a young lady in the dark rain. 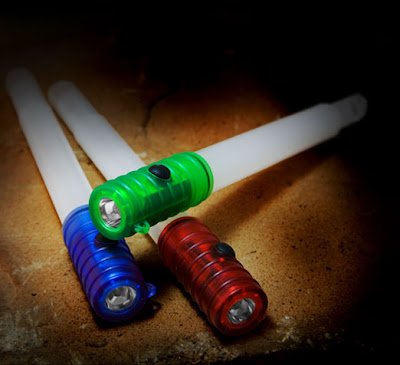 Maybe this little encounter has made her aware of her attire, maybe she will dress in lighter, reflective clothing next time, but then again maybe I am simply dreaming. I can't hand out flashlights to every pedestrian, cyclist and skateboarder I see (or don't see). Maybe I can do my part by scaring the living daylights out of a person or two hoping not to hit them. I have worn my hi-vis vest out on evening walks, I always carry a flashlight and I wear bright reflective gear when I ride. I protect myself by being visible and I guess the best I can do is lead by example.

Let's be safe out there and lighten up.