I posted, on a local forum, a time and a place to meet for a ride to the coast for clam chowder. We had just been there the week before on the same route but I am always looking for an excuse to ride. We met at a coffee shop and we had six bikes show up and then met another along the way. Now I was a little concerned to be the only one riding a cruiser and the only one riding two up. However, I don't think I was nearly as concerned as Brandy was, her being the 2 up-ee. 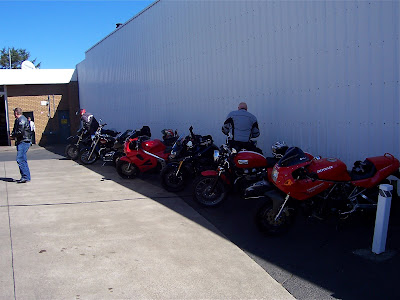 I set up the ride so I was the leader and we kept a brisk pace down to the coast to try and keep it interesting for the others. It was a bit of a daunting task watching 6 sport bikes in your mirrors through the twisties. I met most of these guys when I rode my Sprint ST but they have accepted the cruiser and my passenger as part of the group, they are a great bunch of guys. Jim even tipped his hat to any woman that'll ride on the back of a bike doing 45 into a 25 mph corner. 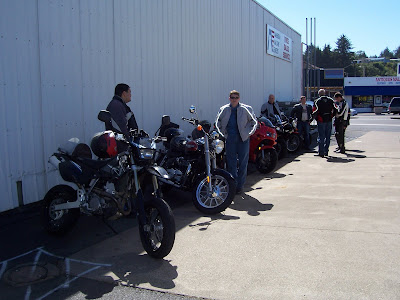 The great thing about riding with other riders is having them reveal their secret back roads, shortcuts and routes. It was a pleasant day to the coast but North of Waldport around Seal Rock, the fog rolled in and it got downright chilly. It makes for better tasting chowder but not something you want to ride through again after you just warmed up. 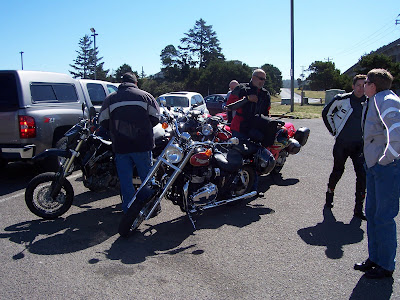 Paul took the lead on his VFR eager to show us his back road to our next fuel stop. It was a great road that headed inland and ended up back onto Hwy 101. As soon as we turned off you could feel the temperature rise and the sunshine warming the ribbon of asphalt welcoming us to ride. What a pleasure to follow a fellow rider through an unfamiliar road, Paul set the perfect pace and never touched the brake, the sweeping corners opening up to vast stretches. The road presenting another corner, gracefully arching into the next. 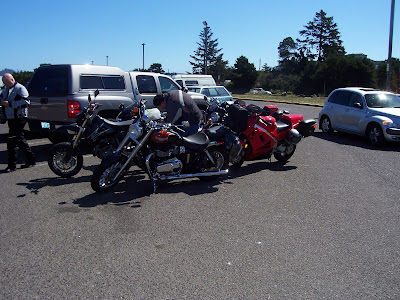 Brandy is a great passenger and knows I would never push harder than I feel comfortable, it's just that my comfort level is alot faster than hers, especially following a sport bike. I guess I confirmed Jim's earlier tip of his hat when my boot and left pipe scraped through a 20 mph corner. Some couples go to trust building workshops where they fall backward and trust their spouse catch them. I take my wife on a motorcycle ride and try to outrun 6 sport bikes through the twisties. 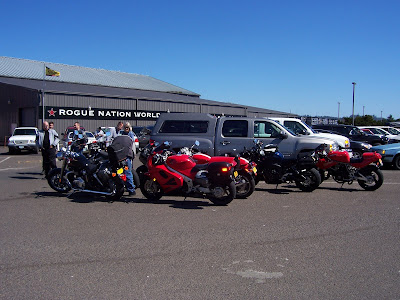 I ride a cruiser, but I don't think anyone has told my bike yet. I think I'll keep it a secret and let her wear the scar on her pipe as a distinguishing badge of honor.
Posted by Troubadour at 11:59 PM