Wow, I have neglected my blog! Allow me to catch up, remind myself why my schedule is so full, whilst referring Trobaritz's blog to jog my memory. I'll post these up as I find time. 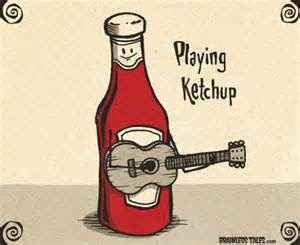 First off, this Spring a couple of guys at work decided to buy motorcycles. Three of them bought Kawasaki KLR650s, and knowing that I rode a Triumph Tiger and a Yamaha XT250, they too wanted to ride gravel roads.

I try very hard not to mix my work life with my home life, but when it comes to motorcycles what are you gonna do? As my social calendar started to fill, my solitude seemed to slip away. Since we all work in the same department, have the same schedule with Friday mornings off, they suggested we meet for coffee every week. Of course, meeting for coffee leads to discussions about rides, roads, and maps, and we all know what happens next.  Yep, we're shucking our obligations at home to go riding. 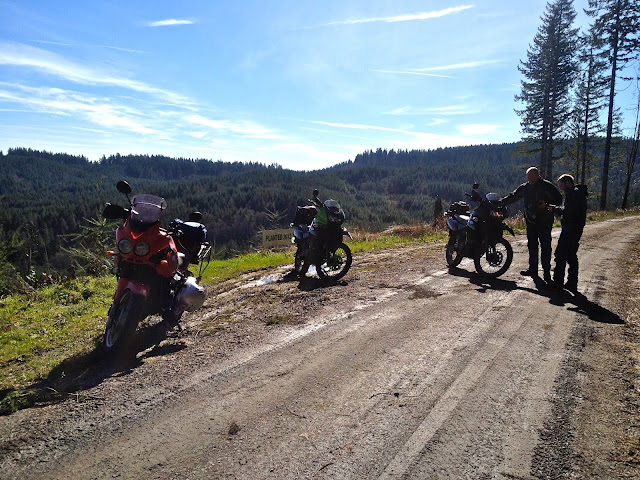 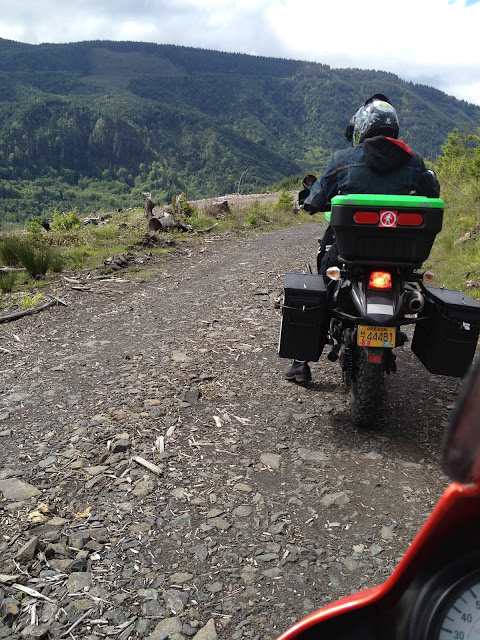 Then all of this riding has led to trip planning, particularly a 2+ day ride from the Cascades to the Coast, or the Oregon Backcountry Discovery Route (OBDR), so when we're not out riding, we were buying camping gear, fitting kit to our bikes, and doing short shakedown rides to coffee. Still shucking our obligations at home.

One of my shakedown rides, (the guys at work couldn't make it, but Polar Bear did) was the Black Dog Dualsport Adventure Ride; a two day dust fest near Hood River the first weekend in June.


Andy and I loaded up the bikes onto his trailer that Friday morning and headed off to Hood River. We got barely an hour up the freeway when we received texts and phone calls from Mrs. Polar Bear stating there was a train derailment and oil tankers on fire in the Gorge and that I-84 was closed at Hood River, the very spot we were headed. 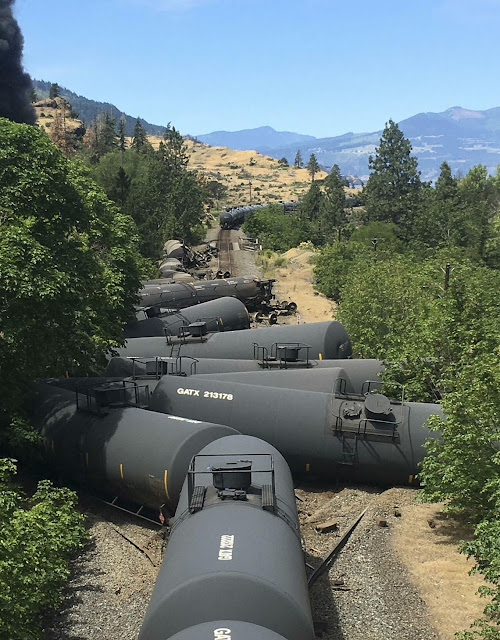 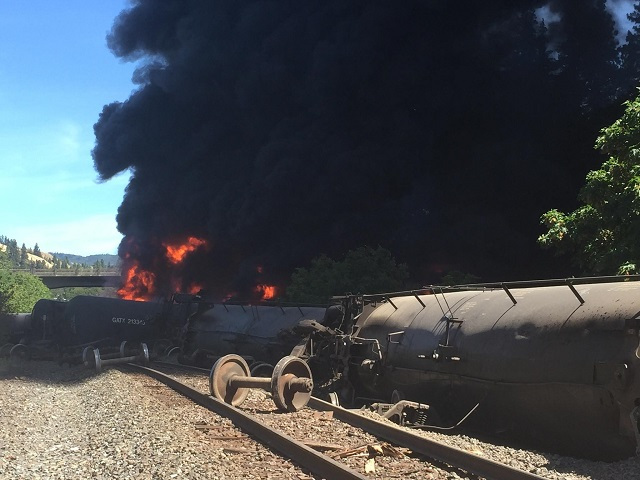 After a bit of head scratching and consulting our maps, we decided to head East through Molalla and sneak around the backside of Mount Hood. This made for a steep climb and a minor overheating issue, but with Andy's mechanical wizardry and a temporary repair to the radiator with some quick steel, we were able to make it over the mountain and into Odell to the Fairgrounds where we set up our tents for the weekend. Another friend Don, beat us there with his motorhome and was able to claim a spot for us and a couple of other friends who arrived later because of the train. We could see the smoke from the fairgrounds, but not close enough to bother us.


Up early the next morning, we registered and received our roll charts for the day's route. Having never used a roll chart before we clumsily loaded them into our holders and set off for adventure.

It took a few stops and turns to appreciate a roll chart, but once we got it, we loved it. Coming from a guy reluctant to give up his antiquated flip phone, this sure beat messing with GPS tracks and maps.

The ride was great, however, being on smaller bikes we weren't in nearly as much of a hurry as everyone else. We pulled over a number of times to let a herd of KTMs stampede past us in a cloud of dust, we started referring to KTMs as rhinoceroses.

We would putt along and eventually come upon the same herd of rhinoceroses (evidently known as a "crash") that had stopped at a crossroads to refer to their GPS and maps, then tootle past them with a friendly wave. It wasn't five or ten minutes before the "charging crash" would be blindly stampeding past us again in another cloud of dust, where we would again stop to let the dust settle only to come upon them again at the next intersection. Silly rhinoceroses. 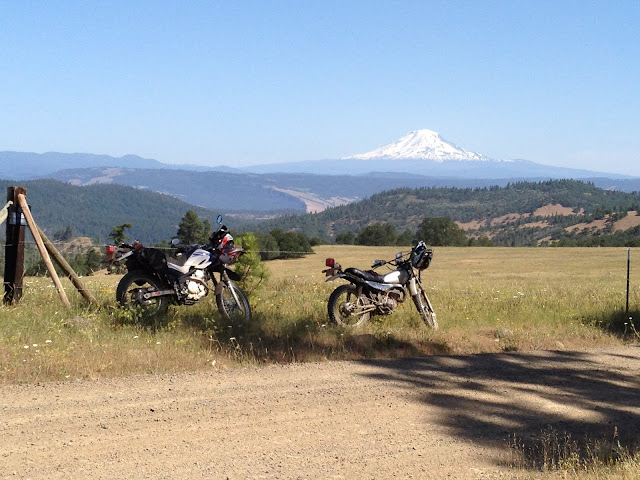 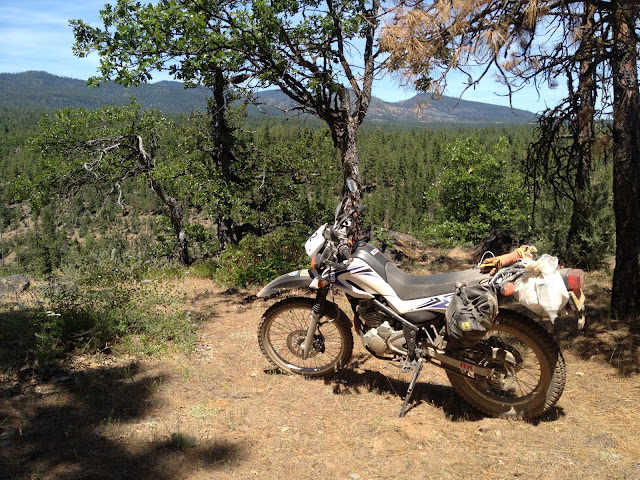 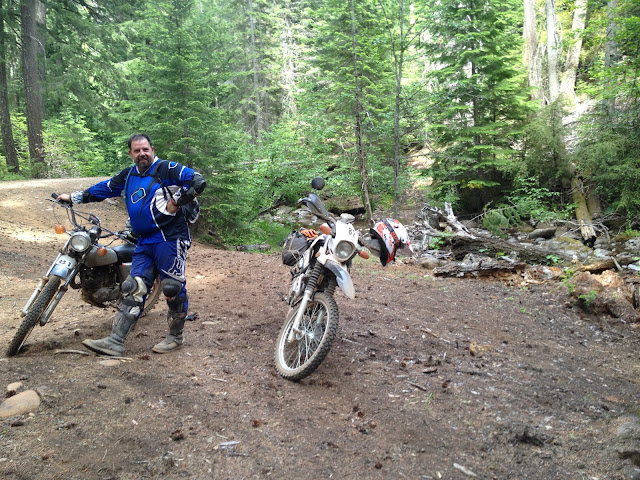 The scenery was fantastic and the roads were just challenging enough that we weren't going to hurt or exhaust ourselves to feign a work related limp Monday morning.


We had a great time, the roll charts made for a self guided tour at our own pace.

This should catch you up to the end of June. To be continued...

Posted by Troubadour at 3:30 PM