Spring in the Valley

Trobairitz and I tagged along for a group ride Saturday, well I did more than tag along, I made a slight suggestion when the ride was being planned. The original route was to go North and then West toward the coast and then down Highway 101 for chowder. Coast runs are fun and I am usually up for chowder but we were just at the coast last weekend with Fable, (my niece Faith, brother Barrett and sister-in-law Lisa).

The weather reports were forecasting the day to be sunny and 64º plus so I recommended that we stay in the valley, too many times we have missed a beautiful sunny day to find the coast foggy, windy or just plain cold and wet. Normally, if it is nice in the valley it'll pull the fog onto the coastline and if it is foggy in the valley it can be absolutely gorgeous weather on the coast. I didn't want to risk missing a rare sunny Spring day in the valley.

We met for Saturday morning coffee and confirmed nine of us for the ride, ten if you count Trobairitz as pillion. We left the coffee shop and rode out Kings Valley about thirty miles before our first stop, we had a several riders with us whom we hadn't ridden with before and wanted to make sure everyone was good with the pace, position etc.
We stopped at the Ritner Creek covered bridge. 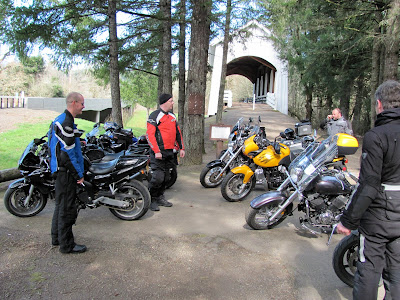 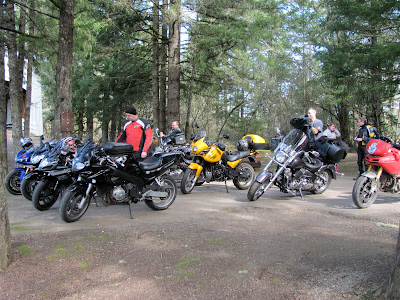 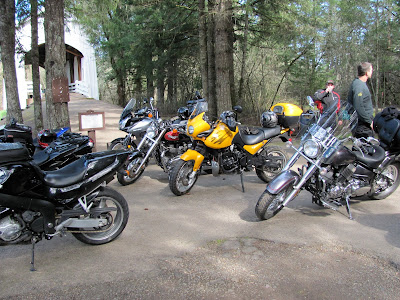 Everyone was doing well and Rick, our fearless leader gave us all a route report of what to expect ahead. We mounted up and continued north to Rickreal where we came across a controlled house fire. Rick was our tour guide in Seattle and never fails to entertain us with some sort of surprise no matter where we go. We could feel the heat through our gear as we passed by in the lane closest to the fire. 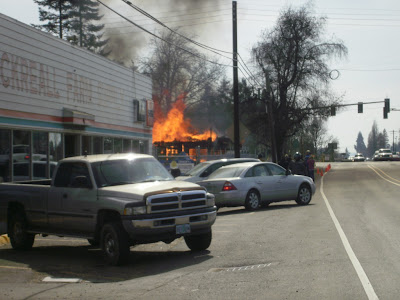 We scooted North towards Brooks and took the Wheatland Ferry across the Willamette River. 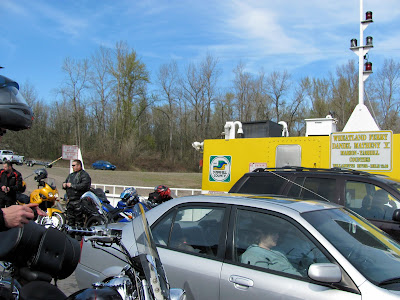 This is where I discovered that I missed my calling as a motorcycle gear fashion photographer. I was sitting on my bike with Brandy behind me and was just snapping pics, I couldn't see what I was capturing and figured I would sort them out later. Isn't Jim a handsome model? 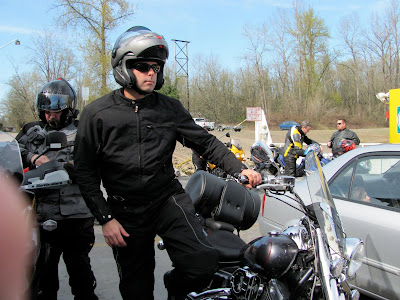 The ferry is just a short cable ferry across the river so there wasn't much time to get off the bike and snap pics so I missed an opportunity to talk with a Can-Am Spyder rider that was on ahead of us. He did give us a bit of a show and pulled away from us as we rode across the valley toward Silverton. I am patiently waiting for Doug to cobble together a video, as he says he has footage of the elusive arachnid.

We enjoyed the sunshine, blooming daffodils and cherry and plum tree blossoms set against the green fields and blue sky before reaching the conifer trees and steep hills of Silver Falls State Park for lunch. 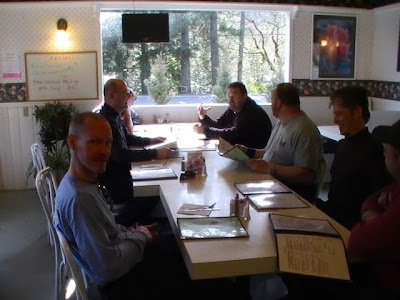 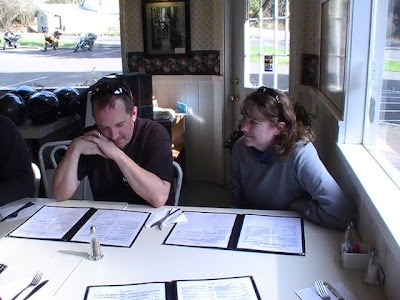 We rode through the park after lunch and stopped briefly at a viewpoint above the falls but only because the line up to pay for parking into the falls was too long to waste such a beautiful riding day. 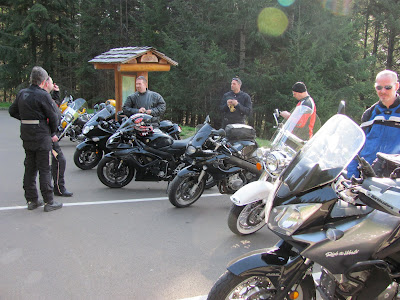 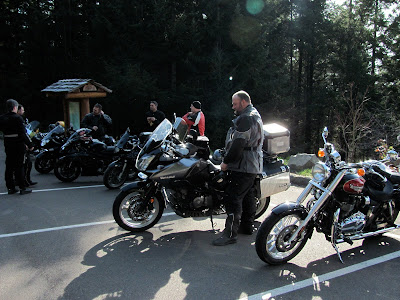 There were a few Harleys hanging around so not to bother them and make them feel less individual than they already were, we saddled up and headed home. It was a great day, we met some new people made some new friends and we look forward to riding with them again.

Unfortunately, the weather today has turned colder and wetter, although appropriate for a sad day. Trobairitz found a newspaper article this morning of a motorcycle crash that happened last Saturday while we were out riding and the death of a fellow rider. I know Riley through a previous employer/friend/fellow rider, had ridden with him several times before and had just spoken to him the weekend before at the Triumph shop in Eugene. I haven't spoken to anyone about the accident yet, but I will stop by this week and offer my condolences to our mutual friends. This is shocking and sad news, my heart and thoughts go out to his family and his many friends. Riley was a rider with over 40 years riding experience, always willing to help, share a great story and a laugh. It is an honor to have known him, a pleasure to ride with and a good man whom will truly be missed.
Posted by Troubadour at 7:27 PM