My New Year wasn't met with resolutions, I normally don't do that, my only resolution was to make note of my odometer as in my last post and even that was post script.

My employer however, had other plans.

I went into work last December 28th and within a half hour was summoned to the principal's office so to say. My supervisor had called a meeting and informed the four of us in her department that management was making some changes. This can't be good.

She told us that there were going to be some departmental changes. One being that the department we were part of was being dissolved. Gulp.

She was being promoted to manage the new department and a co-worker from another department, which was also being restructured, was coming in and taking my spot. Oh crap.

I was being moved into the new Operations Logistics department.

Each of the three previous departments had their own Logistics Coordinator, now we have three new departments and only two of us are the logistic coordinators for everyone. The other or third LC we had moved into my spot, not my position, my physical spot.

That moved me closer to the shipping desk, my duties haven't changed much as of yet. I will report to the new Operations Manager, but that is about all that affects me, except that my desk moved.

Remember when Irondad visited me at work and co-workers warned me of a suspicious culprit lurking about my bike trying to peer into the windows of the mother ship? My desk was here and difficult to spot any seedy characters skulking about. 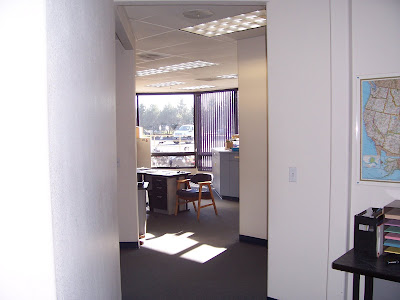 Well that empty spot by the window is my new "spot" or what many wish for "a corner window office". 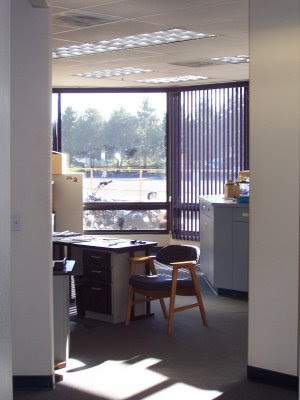 I now basically have a wide screen TV in my office, there isn't much on but I can keep a close eye on my bike. 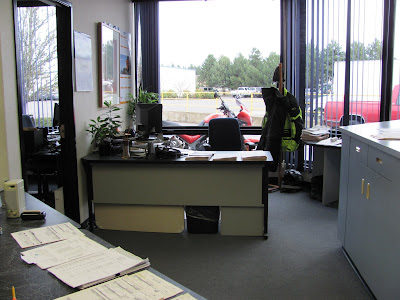 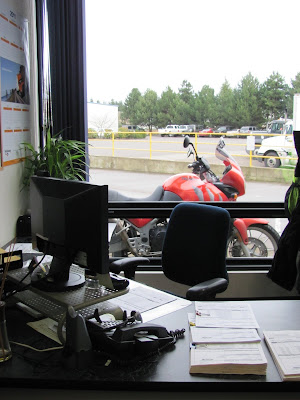 This is about as close as one could get to working with your bike without actually working on it or riding it. 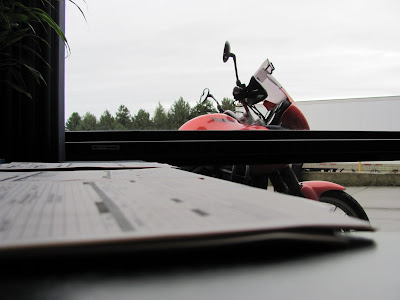 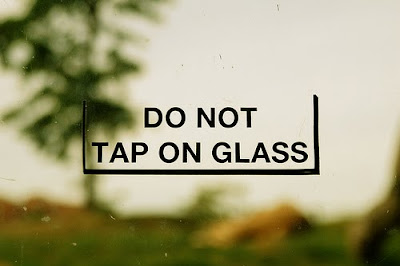 P.S. - We are all aware of Irondad's office, the lucky dog and thanks to BlueKat for the idea of showing us her office and how far she is away from her bike. Let's see your office in proximity to your bike and where you spend your day, a challenge if you will.